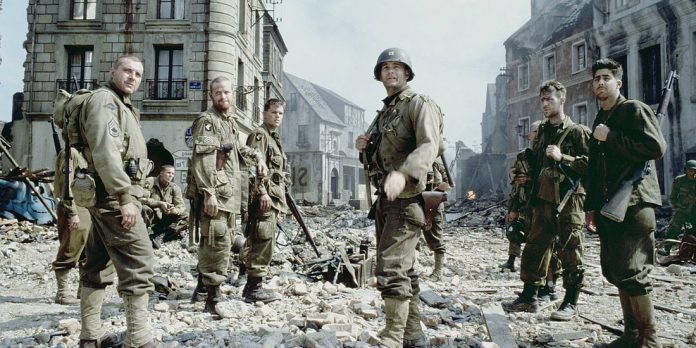 ​​Prior to 1998, there had been depictions of war on screen before. One of the oldest and often depicted genres on screen is the war film. We had seen innocents get un-mercifully taken from this cruel world in “Platoon.” We had seen very personal and intense scenes between characters in “The Deer Hunter” as they played Russian roulette for their lives. However, the depiction of combat itself had never received the kind of realism which Steven Spielberg granted it in 1998 with “Saving Private Ryan.” Only 5 years removed from his Best Director win for another unflinching look at graphic realism in “Schindler’s List,” Spielberg went even bigger with his look at the legendary D-Day invasion and the personal journey that a small group of soldiers goes on behind enemy lines to find one man amongst the chaos of the war and bring him home. In the process, Steven Spielberg inspired an entire generation of filmmakers. Join me, as we wish happy 20th anniversary to what I still believe is the greatest war film ever made and the rightful Best Picture winner of 1998, “Saving Private Ryan.”

​Much has been written about Steven Spielberg’s harrowing and game-changing masterpiece. I could spend a few hundred words talking about the iconic opening 20 minutes which shows the D-Day landing on the beaches of Normandy and how those intense and realistic sounds and images brought veterans back to the war they partook in but that has already been done before. I could talk about how a film which won the PGA, DGA, Critics Choice, Golden Globe, and critics awards from NYFCC & LAFCA for Best Picture still managed to lose the big prize to “Shakespeare In Love” in what is still considered one of the most shocking upsets in Oscar history. All of these would be worthy subjects for a piece as grand as “Saving Private Ryan.” Instead, I want to focus on the one aspect of “Saving Private Ryan” that gets brushed aside the most and that is its screenplay by Robert Rodat but more specifically, it’s often disregarded second act.

The screenplay displays both the very best and the very worst of the human condition. It shows how these young men (And some of them older) were all ordinary people before they signed up to join the great war. It doesn’t do this through flashbacks. We never leave the timeframe which the film places us in with these characters. Instead, Rodat does this with the one part of the movie that people tend to forget the most about and that is the middle, otherwise known as the second act.

The film has two major battle sequences which bookend the film, the first on a macro level where we are introduced to the characters and are dropped right into the action, the second where we are fully invested and their heroic efforts can individually be told on a grand scale. In between these two giant set pieces are a few unique obstacles the characters encounter along the way to discovering the whereabouts of Private Ryan which tests both their physical and mental limits due to their danger and moral complexity. Evading a sniper attack or taking out a machine gun operated bunker which could be used to kill off the next group of soldiers that passes by. All of these present moral dilemmas for the characters and Rodat is very careful to make sure that each scene advances the characters so that by the time we get to the final set piece where our heroes must defend a bridge so that they might be able to earn the right to all go home, we are emotionally invested in whether they live or die.

However, the entire film cannot consist of only horrifying combat. One of the plot devices which Rodat uses to show us who these men really are is a few scenes of quiet dialogue between the characters where they reminisce on their lives back at home. There are two major examples of this: the scene at the church where Private Wade recounts a heartbreaking story of where he took his mother for granted and the other is a scene where Private Ryan (Matt Damon) tells Captain Miller about the last night he saw all of his brothers alive starting off with a light tone until the harsh realization that he will never see them again settles in. Some may claim that these scenes slow the film down or kills its momentum but its exactly the kind of humanizing balance the film needs so to not come off as completely barbaric in its showcase of gore and terror.

Rodat perfectly captures the embodiment of the greatest generation on screen and his words are expressed truthfully by the excellent cast that Steven Spielberg assembled for this film. At the very head of that pack is Tom Hanks who is almost seen as a superhero in this movie in many ways. He leads his men into danger. Takes command and charge of many harrowing situations. He makes the right decisions for the good of the mission while still balancing his men’s dissatisfaction for so said mission with each passing loss that their group suffers. The film carefully builds him up to be almost a mythical figure to both his men and the audience and what better person to portray this than the man that everyone in America idolizes and loves? However, that all changes when Captain Miller notices the toll that the mission has taken on his men and how they are all turning on one another. He reveals to the group where he is from and what his occupation is (A school teacher). The moment is a quiet one that reminds us what it means to be human despite being caught up in the worst situations which could turn us inhuman.

​One final character that Rodat and Spielberg spend a great time on developing is Corporal Upham portrayed by Jeremy Davies. From the very beginning, we know him to be a coward and an inexperienced combat soldier. What’s most fascinating is how much he becomes the audience’s lens for viewing the war through such terrified and shocked eyes. One would think that after such shared experiences that Upham faces with his comrades in the second act, that by the time we get to the third act, Upham would be able to get up the stairs and save his friend, Private Mellish’s (Adam Goldberg) life. But Rodat does something very different with Upham than the typical good-guy save. He buckles under his fear and cowardice and is unable to put himself in harm’s way to save his friend, one who he and the audience have come to love and respect by the third act. At the end of the film, he finally realizes his mistake and kills a German soldier who he showed mercy to earlier in the film but it’s too little too late by that point. His character is one that does undergo an arc but it’s not the kind of arc we expect which only adds to the variety of character types portrayed in the film helping to give “Saving Private Ryan” a universal feeling of attachment to its characters and story.

Are there historical inaccuracies in “Saving Private Ryan?” Surely, there are liberties taken with the screenplay for dramatic effect instead of historical accuracy. Does that prevent us from effectively caring about the characters that Rodat and Spielberg give us on screen? Absolutely not. I am not trying to make an argument as to why I think “Saving Private Ryan” should have won the Oscar over “Shakespeare In Love.” That is actually one of the wins over “Saving Private Ryan” that I agree with. However, many people only remember “Saving Private Ryan” for its battle sequences which are certainly worthy of praise and rightfully earned the film a slew of technical nominations at the Oscars including wins for Best Director, Best Cinematography, Best Film Editing, Best Sound Editing and Best Sound Mixing. People seem to forget that there is an entire middle section of the film though that carefully displays excellent characterization, and even more complex action scenes but on a more human level than on an epic level. It has unrightfully gotten overlooked and/or overshadowed for reasons which I sincerely do not understand. If you go through the clips which have been included in this piece, hopefully, you’ll be reminded that every step was taken to show that these characters were written to be as human as they possibly could be. Through their relatable humanity on screen, it gives us the opportunity to realize the enormity of the sacrifice real men and heroes gave us so we could live with the freedoms we do today. These men were ordinary. They had real fears, conflict, doubt, and regret. And despite all of that, they fought against evil and tyranny and won us the second world war. All of this is contained within “Saving Private Ryan’s” second act. 20 years later, I hope that people will start to finally understand that.

​So what do you think? What are your thoughts on “Saving Private Ryan” 20 years later? How do you feel about the screenplay’s second act? Let us know your thoughts on the film in the comments section below.