“CATCH THE FAIR ONE” 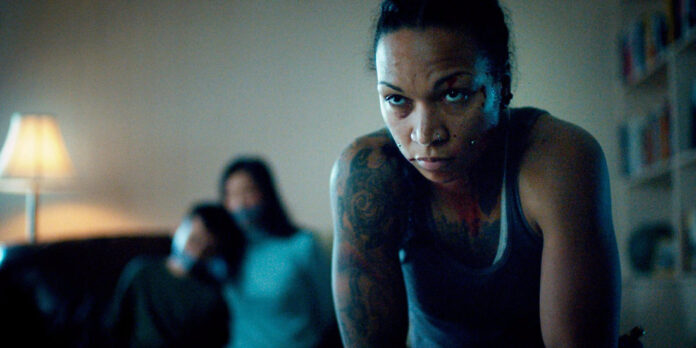 THE STORY – A former champion boxer embarks on the fight of her life when she goes in search of her missing sister.

​​​​There’s nothing like a good revenge movie, and “Catch the Fair One” provides all the possible suspense and thrills while reminding us of real-life tragedies among Indigenous women. It’s a film that grabs you within the first few minutes and keeps you hooked until the very end.

Kaylee (Kali Reis) is a former boxing champion named “KO,” and we are immediately introduced to the intensity of her training — her hands, wrapped tightly and placed into boxer gloves, can throw a thousand punches a minute. But she’s left that life behind ever since her sister, Weeta (Mainaku Borrero), was kidnapped and thrown into sex trafficking. Kaylee sleeps in a shelter with other women, often with a razor blade in her mouth that produces a pool of blood every morning; she works at a diner, stealing scraps of food instead of asking for a fresh meal from the staff; and she takes pictures with fans when they see her, though she doesn’t seem like the confident fighter they’re used to seeing.

It’s clear to Kaylee that no one is looking for Weeta, so she decides to take matters into her own hands. After a few training sessions to prepare for anything that could happen, she goes undercover in the sex-trafficking world to try and find her sister. And though she’s not one to mess with, every step of the way presents itself with more challenges and darker situations for our revenge seeker.

From the start, audiences will find themselves hooked by Kaylee’s journey and the fight that she’s about to embark on. She’s definitely tough, based on her once profession and physical appearance, but we also see so many other sides of her. She meets with her mother, Jaya (Kimberly Guerrero), a support group counselor, one day, and immediately you can sense there’s tension and hurt feelings between the two. Kaylee even asks her mother to admit she wishes she was not Weeta, who went missing. As she begins her undercover mission, we see her utterly vulnerable once things become out of control after meeting with one of the pimps. And then, when the real fun begins, Kaylee shows the rage she’s been keeping inside and the hatred she has for the people who hurt her sister. It’s hard to watch many revenge scenes and sex-trafficking moments, but they’re meant to make people uncomfortable and show us what’s out there.

Reis is genuinely perfect for this role. Not only does she bring her skills as a fighter, but she also lends her heart to the unthinkable injustices that have happened with Indigenous women. Reis is an activist for the Missing and Murdered Indigenous Women movement, and she even co-wrote the script for “Catch the Fair One,” which shows how personal the topics are to her. Whether she’s giving men the pain they deserve, or she’s fighting for her sister and so many other kidnapped girls, she delivers in every scene. Though their roles are scummy and short, Daniel Henshall and Kevin Dunn also stand out and offer many disheartening and truly evil lines that stick with you long after the credits roll.

The film has a short runtime, which is always a plus for any movie, but this one could have actually taken a bit more time to show audiences more of Kali’s journey or her relationship with her mother. That one scene between the two is so powerful and emotional that it’s a shame we didn’t get more. Getting even more information on what is happening to Indigenous women would have made the film even stronger. Women and girls are murdered at a rate that is ten times higher than other ethnicities, and 84.3% of Indigenous women have experienced violence of some kind, according to Native Women’s Wilderness. This film does show many of these experiences — several missing posters, a support group for families, and scenes that depict what happened to Weeta — but perhaps more conversations or information would have packed an even harder punch.

“Catch the Fair One” is tough to watch, knowing the tragic truth in our world, but it delivers a strong message nonetheless. Reis takes every moment of this film to show us she’s in charge and perfect for the role. Perhaps diving even deeper into the subject matter would have delivered an even more effective product. However, there’s still plenty that will keep audiences captivated and in suspense from start to finish.