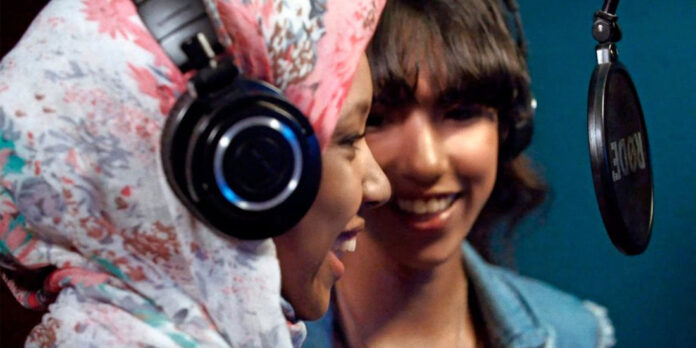 THE STORY – Anas, a former rapper, starts working in a cultural center. Encouraged by their new teacher, the students try to free themselves from the weight of traditions and express themselves through hip-hop culture.

​​​​​It’s a movie chestnut you’ve seen probably a dozen times or more: the inspiring saga of an inspirational teacher. From “Goodbye, Mr. Chips” and “To Sir, With Love” to “Dead Poets Society,” classes filled with ragtag students of all shapes and sizes have been lifted up by a teacher who breaks all the rules (obligatory) and teaches them more about life than they could ever learn in a textbook. There’s a reason why this story has popped up again and again in movies: it works.

French-Moroccan director Nabil Ayouch is the latest to take this trusty vehicle out for a spin with “Casablanca Beats” and winds up giving it a whole new coat of paint. Set in a real-life cultural center (which Ayouch helped to found in 2014) in the notorious Moroccan neighborhood of Sidi Moumen just outside Casablanca, the film changes things up in ways that are more than just locale: the core curriculum here is rap and hip-hop.

It’s the first day of class for new teacher Anas (real-life rapper Anas Basbousi), who wastes no time in asserting his “rebel teacher” bona fides by spray-painting the word VIBES on his classroom wall. His students happily are devoid of the cliches that normally plague this genre — there’s no bully or mean girl character here to provide artificial melodrama. Instead, we get characters who feel like actual students because, in fact, they are, as Ayouch has cast teens from the real arts center as fictional depictions of themselves.

As a teacher, some might think that Anas’ methods are tough but fair, while others may consider him the Simon Cowell of Casablanca. When he asks his students to show him their stuff, he calls out the boys for offering little more than pale copies of the rappers they hear on the radio. The girls in the class, however, show Anas something very different. Yes, they may lack the swagger and the confidence to sell their rhymes, but their lyrics show both heart and a fighting spirit that impress their new teacher. Swagger can be taught, but that spirit is just something inside you that can’t be manufactured.

As the girls continue to hone their skills (and the boys eventually see the light), “Casablanca Beats” takes on an improvisational style, an approach that brings with it both strengths and weaknesses. On the upside, it gives the film a documentary-like feel, that these real kids are thinking and acting in real-time, the highlight of which is an extended sequence where the class feels comfortable enough with each other to have an honest conversation about what’s really going on in their lives.

In these revealing exchanges of ideas, any given issue can split the group, either by gender (words and actions that boys see as being innocent are often taken as harassment by the girls) or by religion (is hip-hop sacrilegious, for example, or should girls be forced to wear the hijab anymore?). There’s a spark that is triggered in these scenes, and each discussion draws us ever closer to these increasingly complex students.

But these moments of character revelations are no natural substitute for a developed character arc for the students, and that’s the downside to the on-the-fly approach that the film sometimes takes. There are moments where we see glimpses of the students’ home lives, but they’re just that, moments. And there’s no actual dramatic conflict in the narrative, something the film could use. Yes, the usual parents are outraged by the “filth” of hip-hop, but that device was old when “Footloose” used a variation on it, and it feels just tacked on here.

If there is a through-line that binds “Casablanca Beats” together, it may be Anas’ inspiring mantra, “You have to change it because you didn’t choose it,” a statement that urges his students to use their rhymes, not for self-promotion but to spark change that they feel their country and society needs. And their climactic final concert is created to express just that to an audience.

“Casablanca Beats” is Morocco’s official selection in this year’s race for the International Feature Oscar. In a field filled with some rather downbeat competitors, the sick rhymes and inspirational message of “Casablanca Beats” clearly make it the feel-good alternative in the race, and that’s not a bad place to be.