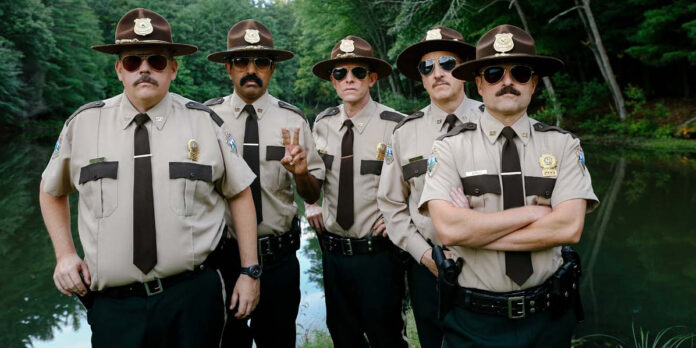 THE STORY – Fired for their previous shenanigans, former Vermont Highway Patrol officers Thorny, Farva, Rabbit, Foster and Mac get a shot at redemption from Capt. O’Hagan and Gov. Jessan. The wacky quintet must provide law enforcement for a French Canadian town that’s transitioning to U.S. sovereignty. Their unconventional methods soon get put to the test when they encounter a smarmy mayor, mischievous Mounties, a smuggling ring and a 1,300-pound bear.

After losing their police-men jobs due to an incident with the actor Fred Savage, the notorious Vermont officers find themselves down on their luck. Dreaming of the days they can once retake their mantles as highway patrolmen, they are given another opportunity. A small slice of land in Canada is being integrated into the state of Vermont, making it apart of the United States. The U.S. government, in search of experienced police officers who are also familiar with the highway patrol life, hire the old crew. Mac (Steve Lemme), Thorny (Jay Chandrasekhar), Foster (Paul Soter), Rabbit (Erik Stolhanske), Farva (Kevin Heffernan) and Captain O’Hagan (Brian Cox), all suit up once again to protect and serve the state of Vermont. But instead of protecting and serving they more just mess around and cause a whole bunch of chaos.

The Canadian locals are not happy with the merging of land. They show a lot of disrespect towards the crew of officers, ensuring that they know there are not welcome. At the core of all the hatred is Mayor Guy LeFranc (Rob Lowe), who constantly assures everything is fine but is often the cause for most of the acts of chaos. After a series of ridiculousness acts from the highway patrol officers, the government decides to shut down the merger which will strip the crew of their newly regained jobs. Underneath all the fun and games, the highway patrol discovers some sort of smuggling of guns, drugs, and other mysterious contraband occurring within this section of land. If they can blow the roof off of the smuggling operation it may just be enough to secure their employment.

As you can tell, the plot of the film is pretty basic. There isn’t much happening other than what is being presented on the surface. There isn’t much to expect in this department. Even the first film is rather straightforward. The biggest problem with this film is that they attempt to replicate what made the first project so great (See “The Hangover 2” for another example of this). The improvised style of comedy worked so well the first time around and now it just is becoming redundant. Which is disappointing to say considering just how funny the first one is.

“Super Troopers” presented a lot of real original comedic setups and payoffs. “Super Troopers 2” attempts to put on a different façade that is just the exact same one underneath the surface. There is a certain amount of joy that comes from seeing all of the gang back together again but if you have not seen the first installment, then there sadly is not much here to chew on.

“Super Troopers 2” attempts to cram in so many different jokes into once scene that it becomes overwhelmingly boring. The entire film tends to set up some sort of interaction that on the surface seems to be funny. Then they shove dozens of jokes of the same caliber within the same set up that it gets old incredibly quickly. Other modern comedy films have found a great way to flow between the jokes and comedic moments while still telling a story. “Super Troopers 2” doesn’t even attempt to give themselves enough time to tell their jokes. They roll every single line of dialogue at a lightning fast speed that almost half of the jokes don’t even register.

There is not much to redeem in “Super Troopers 2.” Even the re-teaming of the crew is not enough to make the entire hour and forty minute runtime an enjoyable experience. A good majority of the jokes do not land, while every now and again there are some funny moments and great one-liners, the batting average for the film is still ridiculously low. “Super Troopers 2” simply just attempts to copy and paste what made the first film great, and in the process fails to be anything super at all.