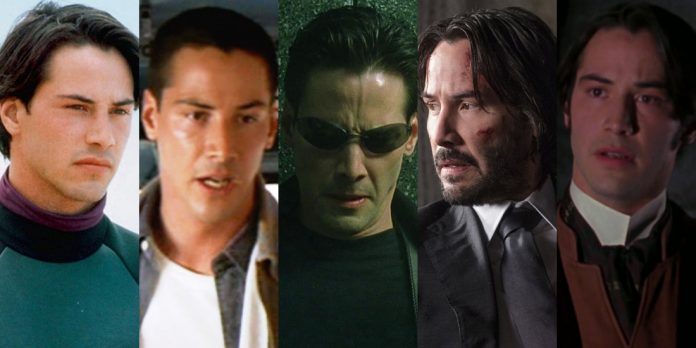 Keanu Reeves is a Hollywood anomaly. He doesn’t have much range as an actor. He never really transforms to play a character, and as anyone who’s seen “Bram Stoker’s Dracula” can tell you, he’s not exactly a pro when it comes to accents. He has cons that would derail most of his peers, and yet, they only serve to strengthen his universal appeal. That’s because Reeves is one of the cinema’s true underdogs. Over the course of his career, few actors have proven more adept at playing ordinary men who rise to face extraordinary circumstances.

Reeves made his film debut in 1985, but it wasn’t until “Bill & Ted’s Excellent Adventure” in 1988 that he began to forge his underdog path. He plays Ted, an air-headed teen with a penchant for air guitar and getting bad grades. Reeves leans into the character’s dopiness with a few classic one-liners (we get his very first “Whoa” here), but most of the film’s charm comes from the realization that Bill and Ted are the future saviors of the universe.

We see the fate of mankind hinge on the outcome of a high school presentation, and even at a young age, Reeves is able to sell the absurdist outcome with ease. He’s so committed to the character’s blind optimism (“We are in most excellent shape for our report!”) that one can’t help but go along for the ride.

Reeves goes on a much bumpier ride in 1991’s “Point Break.” Here he plays Johnny Utah, a rookie FBI agent who discovers that saving the day isn’t always such a breeze. He goes undercover to snuff out a crew of bank-robbing surfers, but his inexperience (the guy can’t even surf properly) leads to some tragic missteps. The more he fails, however, the more he becomes determined to prove his self-worth; and Reeves plays gritty determination like nobody’s business. When he shouts “F*ck it!” and jumps out of an airplane sans parachute, you have enough misplaced adrenaline to swear you could do it too (you shouldn’t). By the end of the film, Johnny has sacrificed his friends, his career, and years of his life to close out the case– the price for doing what’s right.

Reeves’ earnestly is another part of his underdog appeal. Where guys like Schwarzenegger and Stallone flaunt their world-saving abilities, Reeves reacts like most people would; with a mix of terror and incredulousness. For proof, one needn’t look further than his 1994 blockbuster “Speed.” Reeves plays an L.A. cop who has to defuse a bomb on a city bus before it goes under 50 mph. While the film has its share of kinetic action, the real tension comes from Reeves’ cop, who genuinely cares about the bus’ passengers and fights his own mortal fears to protect them. This degree of selflessness could have been cheesy with a different actor, but once again, Reeves strikes the perfect balance between vulnerability and heroism. It’s no wonder Sandra Bullock fell for him.

​If you took a shot for every time a Reeves character was tasked with saving the day, you’d be under the table. (Bonus points if his name is “John”). It’s staggering, really, how often he’s called upon to fulfill this archetypal role. Even more impressive is the fact that he makes each of them work. In the 1995 tech-thriller “Johnny Mnemonic”, he’s a courier who helps cures mankind of a digitized plague. In the 2008 remake of “The Day the Earth Stood Still”, he’s an alien who tries to help mankind delay its own extinction. Some of his characters also have a unique skill set when it comes to battling demons. In “Little Buddha”, “The Devil’s Advocate”, and the underrated “Constantine”, he dukes it out with various Satanic forms and manages to come out with his life intact. If that doesn’t warrant a “Whoa” I don’t know what does.

In terms of sacrifice, though, none of Reeves’ characters can rival Neo in the “Matrix” trilogy. The journey his character takes, from the nondescript hacker to literal messiah, is so ambitious that he could’ve come off as a broad cliche. But Reeves wisely plays up Neo’s flaws; his doubts and fears, and lets them inform the character’s actions. We don’t know what it feels like to dodge a bullet, but we know the fear of losing a loved one or being unable to live up to our potential. Even as the “Matrix” films become increasingly messy, and the writing borders on nonsensical, Reeves gives the trilogy an emotional anchor. We know we can count on him until his dying breath.

Which brings us to “John Wick.” The action trilogy has injected new life into Reeves’ career and the genre as a whole; and it’s done so by putting a clever spin on his underdog persona. Wick is more boogeyman than everyman at this point; with the body count to prove it, but his desire to settle down and live a normal life brings the actor full circle in a way. Where he once played ordinary men who were forced into action, Reeves is now playing a man of action who yearns for ordinary times. And a healthy dog. Hopefully “John Wick Chapter 3: Parabellum” grants him both.

At 54, Reeves is more popular than ever. After “Parabellum”, he will reprise his breakout role in the upcoming “Bill & Ted Face the Music”, and provide the voice for a new character in Disney’s “Toy Story 4.” We’ve no clue how long this Keanusance will last (preferably forever), but we do know that Reeves will continue to bring humility and humanity to whatever project comes his way.