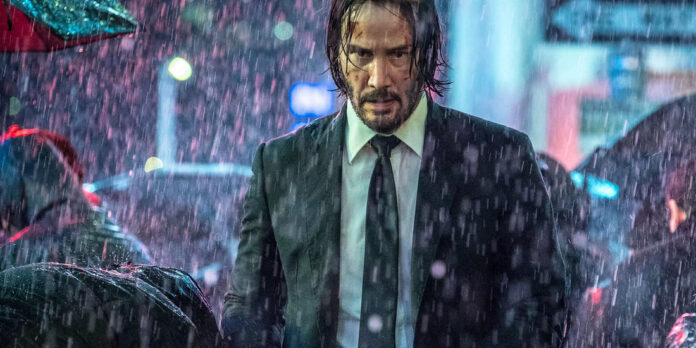 THE STORY – After gunning down a member of the High Table — the shadowy international assassin’s guild — legendary hit man John Wick finds himself stripped of the organization’s protective services. Now stuck with a $14 million bounty on his head, Wick must fight his way through the streets of New York as he becomes the target of the world’s most ruthless killers.

​After the events of “John Wick: Chapter 2” left John Wick (Keanu Reeves) beaten, bloody and now “excommunicado” (All services provided by his underground assassin world have been stripped from him and a $14 million bounty has been placed on his head), “John Wick: Chapter 3 – Parabellum” picks up right where the last film left off. On the run, with little to no support and with the whole world after him, John Wick must now travel internationally to find the man who sits above the High Table, known as The Elder (Saïd Taghmaoui ), in hopes of reversing his excommunicado staus.

This third installment in the “John Wick” franchise is the most relentless, brutal and action-packed. However, it lacks the personal story of vengeance and redemption which drove our hero in the last two films. Instead, it trades that in for a one man versus the world story that lacks heart and resolution, making this highly entertaining action film my least favorite of the franchise from a story standpoint.

Keanu Reeves continues to deliver and then some in the role that revitalized his career with a go for broke physical performance that doubles down on the action, violence, and brutality. Some of the kills that John Wick achieves in his third outing are so outrageous that you can’t help but smirk at the level of originality on display from director Chad Stahelski and his team of writers. Dogs mauling goons, horse riding shootouts, motorcycle sword fighting and even nods to “The Raid” (Featuring that film’s incredible martial artist Yayan Ruhian). It is truly a symphony of violence that many other action films are not even attempting nowadays. “John Wick: Chapter 3 – Parabellum” gives fans exactly what they want but I simply cannot say “and then some” afterward.

Returning characters such as Continental Hotel Manager Winston (Ian McShane), concierge Charon (Lance Reddick) and the underground Bowery king who manages a network of spies through the homeless in New York (Laurence Fishburne) all receive something to do but something about their continuing stories and connections to John Wick feel incomplete. Perhaps because I (and many others) expected this film to be the conclusion of John Wick’s story instead of the lead into what will presumably be titled “Chapter 4,” I felt severely underwhelmed by the lack of character development in this film compared to the first two films even though there is an attempt to explore John’s backstory a bit more through a new character played by Anjelica Huston called the Director, a member of the High Table who reluctantly helps John Wick.

The High Table is ultimately coming for John Wick though in the form of Adjudicator, played by Asia Kate Dillon. They make for one powerful antagonist against our hero due to the resources at their disposal, lack of emotion and blunt attitude which is aided by their inevitable confidence in one fact: John Wick can fight for a long period of time and kill a lot of men but he cannot fight forever. Mark Dacascos fills the role which Common occupied in the last film as the main physical antagonist for John Wick to face off against. There is an interesting twist given to his character, where despite his stealthy assassin skills involving a blade, deep down he’s a real admirer of John Wick’s and considers it an honor to even get the chance to kill him. Yeah, this franchise sure likes to have fun with the legend that is John Wick. I want to pay special mention also to Halle Berry who injects a degree of badassery into this third installment that I didn’t know it needed until I saw it unfold. Her big fight sequence involving John and her two loyal, menacing and destructive dogs is a definite highlight that is well choreographed, brisk and over the top in all the best possible ways.

While “John Wick: Chapter 3 – Parabellum” does a lot right, it is not the concluding chapter to the John Wick saga like many of us thought. It kind of spins its wheels, doe not cover as much story as the previous two films did and ultimately, we end up almost right back where we started when the film ends. Keanu Reeves, like Tom Cruise and Liam Neeson, has found new life in his 50’s with an action franchise which is surely going to keep on going as long as his body can withstand the punishment. Aided by the right amount of intrigue, humor and original action set pieces, “John Wick: Chapter 3 – Parabellum” is a fast-paced thrill ride that dives deeper into who John Wick is and the world that surrounds him. Although I was hoping for a bit more when it came to the emotional stakes of the story, for action junkies, this will surely be a blast.