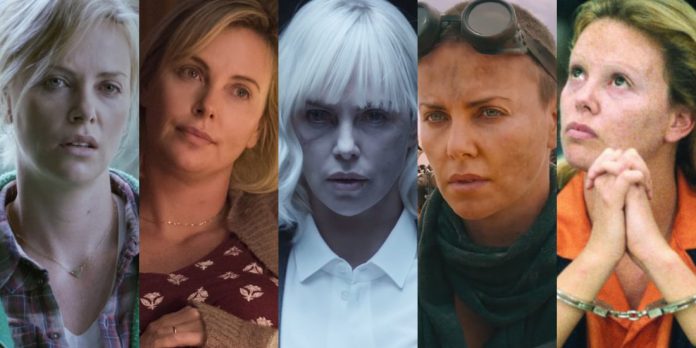 ​She’s an Academy Award-winning actress, a global humanitarian worker, and one of the most role encompassing performers working today. Charlize Theron has made an exquisite career for herself and it doesn’t look like she’s putting a stop to it anytime soon. With an Oscar win under her belt for the daringly brilliant “Monster” (2003), it becomes quite clear that Theron takes her roles very seriously and sometimes they turn out to be engagingly exuberant. She’s a badass woman who rarely stumbles, and we can always expect to see great work from her, whether it be harrowing portrayals of a hope once robbed or the more lighthearted offerings and action-packed escapism. We can find yet another one of her best performances in Jason Reitman’s latest, “Tully,” which releases in theaters this weekend. While it takes a hard look at motherhood in a naturally candid light, it more than excels Theron’s acting as one of high caliber realness and pedigree. In 2007, she founded the Charlize Theron Africa Outreach Project (CTAOP) in an effort to help the youth of Africa going through HIV/AIDS. She is an exemplary citizen in ventures as diverse as her acting career and this weekend, we celebrate her as she delivers another performance for the books.

From her earlier work in “The Cider House Rules” and “The Devil’s Advocate,” Theron would soon take on risks that would challenge her even further. In 2003, Patty Jenkins’ directorial debut “Monster” is where Theron was tested through a deep character study, earning her the Oscar for Best Actress in a Leading Role. The very bleak and explorative story of America’s first female serial killer gave way to Theron’s acting chops, giving her plenty of built up emotions to act from. Her closely aligned mannerisms gave us an unrelenting look at a woman who had killed men in the vain of her own malnurtured disposition. She brought Aileen Wournos to life in a way that was both profoundly sad and compulsively sympathetic to her hardships; a notion always on the brink of misconception.

She had memorable roles in “North Country” (Which landed her an Academy Award Nomination for Best Actress), “Hancock” and even managed to make an impression in smaller roles such as “The Road.” But in 2011, Jason Reitman’s “Young Adult” (Her first collaboration with Reitman and writer Diablo Cody) put Theron smack dab in the middle of a character’s emotional disarray and preconceived dreams. Her character, Mavis Gary, is a ghost fiction writer who decides to return to her childhood town she so ruthlessly dubs, “a hick, lake town that smells of fish shit,” in hopes to rekindle with a happily married, new dad of an ex-boyfriend. The elements of a swift downfall check to reality are all present, but what inspires this study is how Theron wreaks havoc on Mavis’ own turmoil and turns it into an empathetic whirlwind on growing up. Theron is strikingly charismatic and dares to become vulnerable once her character comes to grips with her own faults.

Theron never once puts her natural discoveries to sleep. Just last year, David Leitch’s “Atomic Blonde” created a daring landscape for Theron’s versatility, lending her MI6 agent character, Lorraine Broughton, a bold and tenacious escape into action. We saw her wield an awesome long take that proved just how much stamina and dedication Theron is willing to give her work. She’s seemingly effortless here and it begs for more enticingly witty choreography. As much as it was fun, it pays an honest debt to her more widely tough (And dare we say now, iconic?) character of Imperator Furiosa from 2015’s “Mad Max: Fury Road.” She ignited a fire in Furiosa that wholeheartedly plays from her brokenness and a sense of rooted resilience to become a heroic figure her character didn’t initially intend to embody. Theron performs in outrageously grandeur environments here and offers up one of her most charismatic strengths to an onslaught of technically impressive action sequences.

Charlize Theron is as compassionate as they come, and it only fuels her pure talent onscreen. She knows just how to dial up aggression and transcendent reality as much as landing comedic heart and the scope of light sensibilities. Over the last two decades, she has emerged as a symbol for women everywhere in Hollywood, showcasing only the best parts of her talent and never degrading herself for anything less. Even in something like “Gringo” which was widely panned, she managed to somehow emerge as a standout which is only a testament to her talents. She’s become widely diverse in her roles as of late and looks to continue on with the help of a second-time collaboration with director Jason Reitman. Screenwriter Diablo Cody, who’s once again pairing up with Reitman (“Juno” & “Young Adult”) gives “Tully” the playfully grounded and realized screenplay it deserves, and in turn, letting our wonderful Charlize Theron bring the script’s honesty forward and will hopefully earn her next hard-earned Oscar nomination.

“Tully” is currently playing in theaters and if you’re at all a fan of Charlize Theron, we highly urge you to go and check this one out.