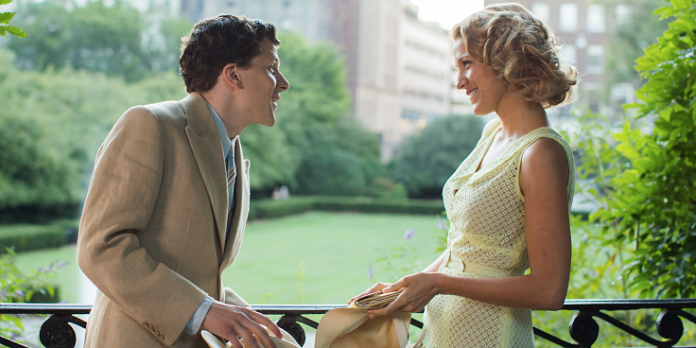 THE STORY – Looking for an exciting career, young Bobby Dorfman leaves New York for the glitz and glamour of 1930s Hollywood. After landing a job with his uncle, Bobby falls for Vonnie, a charming woman who happens to be his employer’s mistress. Settling for friendship but ultimately heartbroken, Bobby returns to the Bronx and begins working in a nightclub. Everything falls into place when he finds romance with a beautiful socialite, until Vonnie walks back into his life and captures his heart once again.
​
THE CAST – Jesse Eisenberg, Kristen Stewart, Steve Carrell, Corey Stoll, Blake Lively, Parker Posey & Ken Stott

Woody Allen is back with another romantic comedy, this time, set in the Golden Age of Hollywood filled with all of his usual tropes, character types, situations and witty dialogue we have come to expect from the now 80-year-old director. In his latest, he explores a young man’s search for love within the busy city of Los Angeles and gets caught up in a tangled web of infatuation and admiration. Despite the comedic Hollywood talk, period setting and joy of seeing the talented cast chomp at the bit to talk Allen’s quotable dialogue, his screenplay plays the story safe and doesn’t take any risks, leaving “Cafe Society” feeling hollow and in some places, annoyingly infuriating.

​It’s the 1930s in Hollywood as Bobby (Jesse Eisenberg) has just moved to the city of angels from New York, in hopes of starting a new and exciting career working alongside his uncle Phil (Steve Carrell), a talent agent for the people of Hollywood. Bobby is also in search of love and he seems to find it with Vonnie (Kristen Stewart), who happens to be Phil’s secretary and his secret lover. Heartbroken, Bobby retreats back to New York where he falls in love with another beautiful woman named Veronica (Blake Lively), but when Vonnie re-enters the young man’s life he has to make a decision as to which woman he will ultimately end up with.

Allen narrates the film (Which is oddly mixed in lower than in it should be) and glides his camera more than we’re occasionally used to seeing him do within “Cafe Society.” Unfortunately, this is where the interesting qualities of the film end and Allen’s usual tendencies begin.  At least you can clearly tell Allen enjoys the time period and his writing for the character Phil is spot on with its comedic tone and Carrell delivers the lines gleefully with authority and a touch of fast paced ridiculousness. Kristen Stewart nearly steals the movie as the secretary to Phil, caught up in a love triangle between two very different men who she cares about deeply.  Jesse Eisenberg fares much worse I’m afraid though as he gets the “Woody Allen” type character we have seen before. He’s young, bright, self-centered and infatuated with all things love, Jewish and New York. I simply could not relate to his character, for every time he was let down by either Kristen Stewart or Blake Lively’s (Who is quite lovely in the film) characters, he failed to see anything from their perspective. This all comes down to Woody Allen’s writing as nearly everyone comes off self-centered and they make the wrong choices time and time again. There are times where this is done for comedic effect and then there are other times where I was not quite sure if Allen wanted me to actually despise these people.

There are not only storytelling blunders on the page but on the screen as well, as important aspects related to the relationship between Bobby and Vonnie are glossed over with a bit of voice-over narration and inexplicable time jumps. This is supposed to be the heart of the film and yet their relationship lacks the necessary scenes to show their chemistry highlighting why they are so in love later on in the film. Another very important moment towards the film’s climax where Vonnie has to make a critical decision is ruined by a quick transitional edit leading to another time jump. It’s examples such as these that ultimately let “Cafe Society” down.

I can see why many people will appreciate “Cafe Society.” You can usually find something worthwhile in a Woody Allen film, from the quirky characters to the quick dialogue and the performances jumping off of the screen. But here, all the great aspects of “Cafe Society” are let down by Allen’s poorly structured screenplay and inability to make any of these characters likable, thus rendering the picture a completely joyless experience. Hey! At least we get to see Corey Stoll back in a Woody Allen film again (Who stole the show in “Midnight In Paris”) having a blast as a rough-type New York City gangster and Bobby’s older brother. While “Cafe Society” may not have been able to work its magic on me the same way Eisenberg could charm his way through a nightclub full of snobby Hollywood types, there’s always next year’s Woody Allen film to look forward to.