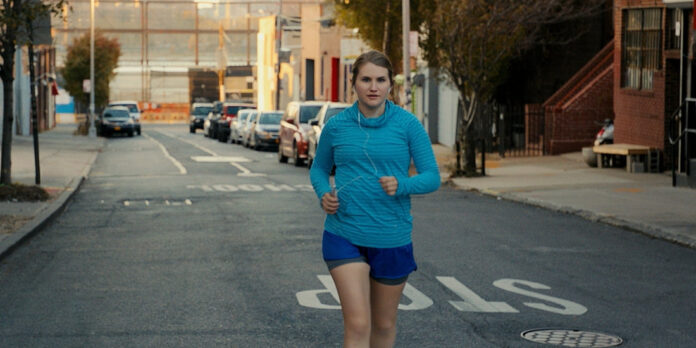 THE STORY – A hard-partying woman receives a startling wake-up call when a visit to the doctor reveals how unhealthy she is. Motivated to lose weight, she soon takes up running to help her prepare for her ultimate goal of competing in the New York City Marathon.
​
THE CAST – Jillian Bell, Michaela Watkins, Utkarsh Ambudkar, Lil Rel Howery, Micah Stock & Alice Lee

​There have been many sports underdog stories told on film over the years. “Rocky,” “Miracle,” “Invincible,” “Seabiscuit,” “Breaking Away,” “Cool Runnings”… practically every sport has one. Even recently there was Mira Nair’s under-appreciated “Queen of Katwe,” about competitive chess! But there hasn’t been an underdog sports movie quite like “Brittany Runs a Marathon.”

Jillian Bell (“22 Jump Street”), in a truly star-making performance, plays Brittany, an overweight twenty-seven-year-old New Yorker with a people-pleasing disposition who lives with a wannabe-Instagram-influencer roommate and parties so much that she regularly shows up late to her job at a downtown theater. When she goes to a new doctor to try to score some Adderall, the doc tells her that he’s worried about her body’s health, particularly her high blood pressure, and recommends that she lose fifty-five pounds. Coupled with a general sense of ennui, the doctor’s words are enough to scare her into making a change in her life. But without the funds to join a gym, she doesn’t know what to do. After her wealthy, skinny upstairs neighbor Catherine (a fantastic Michaela Watkins) gives her the unasked-for advice of setting “little goals” for herself, Brittany decides to run. Just one block at first, then one more and then one more, until after a while she’s joined Catherine in a running group and meets Seth (a winning Micah Stock), an out-of-shape guy trying to make a positive change in his life to be an example to his son. Before long, she decides that she wants to run the New York City Marathon, and with Catherine and Seth by her side, it seems possible.

Over time, it’s not just Brittany’s body that changes, but her mindset and her energy. As she runs more and more and makes more and bigger goals for herself, Brittany starts to dig herself out of the rut she had fallen into without realizing it. But more than a lot of other movies about people changing their lives, this film understands that change does not happen overnight. It is a gradual process, one that we don’t always realize is happening until we reach a major moment: A stumbling block triggers old feelings and insecurities that we thought we had moved past, or our stomachs ache for “comfort food” that we have to actively decide not to eat, or we see ourselves in a mirror and realize that “all of a sudden” we look different. In the hands of Jillian Bell and first-time writer/director Paul Downs Colaizzo, Brittany is one of the most lovably flawed protagonists seen onscreen in quite some time. She has a winning personality that keeps us rooting for her, especially when she inevitably backslides.

“Brittany Runs a Marathon” is based on the real-life experience of one of Colaizzo’s close friends, and one of its strongest attributes is how much it feels like real life. Yes, everything is appropriately movie-heightened, but everything in Brittany’s life – her relationships, her steps forward, her setbacks – feels true in a way that a lot of other similar movies rarely allow. Brittany’s inevitable “rock bottom” moment feels genuine, and genuinely sad, because of the work Colaizzo and Bell have put into making her seem not just likable, but like a dear friend. And her inevitable triumph feels all the more cheer-worthy because the film truly earns that moment by having Brittany really wrestle with what she wants out of life, what is holding her back from getting it, and why.

More than anything, “Brittany Runs a Marathon” is about changing your life. Not just your body or your health, but your whole life. Perhaps this is the reason for the film’s pacing issues in the middle. There’s a long stretch where it almost becomes a romantic comedy that feels a little bit off. But by the film’s end, it’s clear that this is because that’s just how life goes: Sometimes we go through awkward phases when we are unsure of ourselves and what we are doing with our lives. But, like Brittany and the film that bears her name, we work through them. We push through the pain, the doubt, the setbacks, and all the rest of it, to reach our goals. “Brittany Runs a Marathon” is a warm, funny, beautiful reminder that even though we all have stuff that needs to be worked through, we can all change our lives for the better.