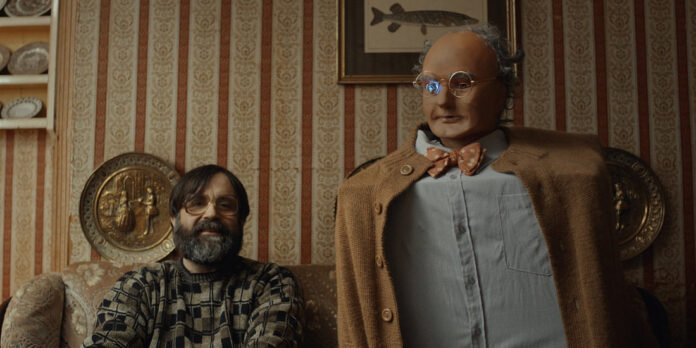 THE STORY – Brian is a lonely inventor in rural Wales who spends his days building quirky, unconventional contraptions that seldom work. Undeterred by his lack of success, he soon attempts his biggest project yet. Using a washing machine and various spare parts, he invents Charles, an artificial intelligence robot that learns English from a dictionary and has an obsession with cabbages.

​​​​​​​​Brian (David Earl) lives by himself in the Welsh countryside. As a way to get himself out of a deep depression, he has started making things. Little inventions like a pinecone bag (a regular bag with pinecones glued on it), a flying cuckoo clock, and trawling fishnets for shoes. None of them really do anything useful or even work properly, but they give him a purpose. One day, after finding a discarded mannequin head, inspiration strikes, and he builds a robot (Chris Hayward). Through some kind of miracle, it ends up working using its voicebox to choose the name Charles Petrescu for itself after reading the dictionary.

Jim Archer’s “Brian and Charles” works best when it examines the lives of this lost soul and his childlike creation, especially in the faux-documentary style that finds them awkwardly talking to the camera and even interacting with the filmmaking crew. Earl, who co-wrote the film with Hayward, plays Brian as an endearing sad-sack of a man while never veering into making him appear pitiful. The boxy, ungainly design of Charles makes for plenty of delightful physical comedy, especially when paired with the processed robot voice. The two make for an adorably lo-fi, a more heartwarming version of Dr. Frankenstein and his monster, with Charles’s childlike behavior providing a fun twist to the now-familiar story of the eccentric scientist and his creation.

It’s frustrating, then, that the film chooses to largely ditch the documentary style in its second half to build up drama and incorporate some poorly-defined antagonists to feel much more like a conventional narrative feature. Because of this, we learn very little about Brian, like why he lives alone, why he’s been depressed, or what hopes and dreams he may have had for himself. Until the halfway point, the film has a lot of potential to become a unique character study; there is a shift in Brian when Charles comes to life, and the duo has a fun dynamic, but Earl still smartly plays the melancholy underpinning everything. Even after he realizes that Charles is truly artificially intelligent in a way even he was perhaps unprepared for, Brian can’t bring himself to take Charles into town with him for fear that people will see him. This could be mined for something, but instead, we don’t even really learn why Brian is afraid. Even Brian’s adorable romance with the local girl Hazel (Louise Brealey) could have been used to deepen his character or provide some backstory, but it stays surface-level throughout. There is so much more that could have been explored here, and the film not doing so feels more like a feature than a bug for unclear reasons.

Despite the fact that it may not reach its full potential, “Brian and Charles” is still an enjoyable watch. The performances are uniformly good, and the central characters are incredibly endearing. The point of view of the screenplay and direction are ever-so-slightly off-kilter, just enough so that the film feels unique and engaging even when it does conform to a more conventional plot. There is a lot to say for a film with personality; though it may be low-key, “Brian and Charles” has plenty of personality. It may be slight, but it’s very sweet.