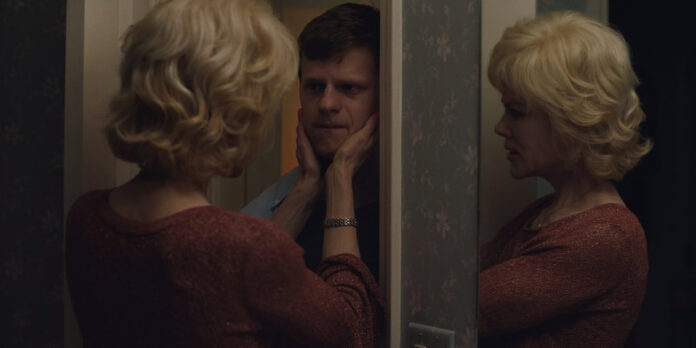 THE STORY – Jared is the son of a small-town Baptist pastor who gets outed to his parents at age 19. He’s soon faced with an ultimatum — attend a gay conversion therapy program or be permanently exiled and shunned by his family, friends and faith.

​​​​When I read Garrard Conley’s memoir “Boy Erased” earlier this year for the Next Best Adaptation podcast episode, I doubted that it could be turned into an equally powerful movie. I’m happy to report that I was wrong and while the film sometimes veers into melodrama, it is saved by its strong performances and the respect with which Edgerton treats its subject.

Based on Conley’s actual experiences, the film follows a young college student named Jared (Lucas Hedges) who is outed as gay to his Arkansas Baptist parents. His father (Russell Crowe), who is a preacher and owns a car dealership, consults with his friends before sending his son off to a twelve-day conversion therapy program run by Victor Sykes (Joel Edgerton). Through flashbacks, Jared grapples with his own sexuality while his mother (Nicole Kidman) questions if the program is the right choice from her hotel nearby. The eclectic group of people in the program range from those that believe fully in its power to Gary (Troye Sivan) who urges Jared to “fake it ‘til he makes it.” As Sykes urges him on through unconventional methods, Jared must decide if he is capable of change, or if he even wants to.

Jared is a character that would be easy to over-act, but Hedges almost never veers into that territory. The 21-year-old actor best known for “Manchester By The Sea” and “Lady Bird” holds his own against Crowe, Kidman, and Edgerton. His portrayal of Jared is understated and subtle, with many nuances, as he portrays a teen trying to reconcile his faith and upbringing with his nascent attraction to men. Through its flashbacks, the film allows viewers to watch Jared slowly come to his realization that he is gay.

This is Crowe’s best performance in years as he manages to convey both a conservative Baptist preacher staunch in his beliefs and a man who genuinely wants to do right by his son. The fact that the film manages to portray this inner conflict without reducing him to the villain or mocking his struggle, is a large part of what makes it so powerful. However, it is Kidman who steals every scene she is in as a mother who is torn between her husband and her son. She nails the part of the conflicted mother who wants to protect her son from everything (even chastising him not to put his hand out the window of the car while driving) but is used to following her husband’s lead in all things. When she has her teary and compelling monologue towards the end of the movie, she is standing up not just for her son, but for herself as well which will inspire some cheers from those invested in the narrative.

The rest of the cast deliver strong performances as well. Joel Edgerton (who also wrote and directed) is chilling as the program director who is determined to convert people back to straightness with whatever it takes. Joe Alwyn appears briefly as Henry, a boy from Jared’s college who he is involved with, giving the performance surprising nuance. A bleach blonde Troye Sivan stands out amongst the others in the “Love is Action” program. It’s an impressive first serious film role from the YouTuber and singer who also provides the original song, “Revelation” for the movie’s soundtrack. Not only is it a beautiful song, but it is used exquisitely within the film for peak emotional impact.

“Boy Erased” does occasionally veer into melodrama with needless slow-motion sequences and a score that can be overpowering and distracting. Perhaps this is not shocking as it is only Edgerton’s second full-length film as a director, though he manages to bring wonderful performances from the whole cast. The true power of “Boy Erased” is its ability to remind audiences of what LGBT+ youth struggle with as it is based on Garrard Conley’s life. The end slides state that gay conversion therapy is still legal in many places in the USA. Because the cast includes household names like Crowe and Kidman, it’s possible that it may reach parents who would benefit from seeing it.

It only seems right to warn that the film is difficult to watch in parts. Not only are there a handful of disturbing scenes within the gay conversion therapy program, but there is a somewhat extended scene of sexual assault. Often when memoirs are made into Hollywood films, the endings are changed to give them more resolution or a feel-good conclusion. I truly appreciate that this film instead shows that for some families, the tension that is created by a family member coming out is never resolved. Despite some technical flaws, the movie is one that I think everyone would benefit from seeing. It’s worth watching for Kidman and Crowe’s performances alone, but Hedges, Sivan, and Alwyn further its authentic feel. While it’s not a big showy Oscars film this year, I do think it’s one that will stand the test of time.