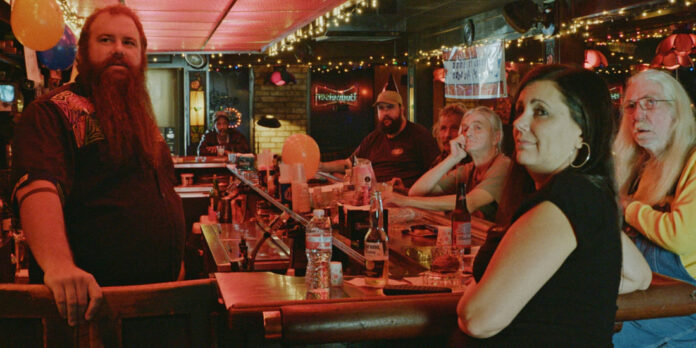 7/10/2020
By Casey Lee Clark
​
​​The Ross Brothers’ “Bloody Nose, Empty Pockets” depicts the final day of operation for a Las Vegas dive bar, showing us the community formed there and what this place means to everyone. During the day, we see them set up decorations while daytime TV plays on the bar’s television (weather reports, The Price is Right, Jeopardy, etc.) One of the patrons, Michael, is assumedly homeless and partially lives at the bar, sleeping on the couch and shaving his face in the bathroom mirror before opening. They host a last day party as various regulars stop by, complete with veggie trays and a cake that reads “THIS PLACE SUCKED ANYWAY”. As night falls, we alternate between the late night bar conversations and the misadventures of the female bartender’s son as he gets high and steals beers with his friends in the alleyway. The film portrays a real and honest look at various lost souls and the shitty bar they love, or does it?

There is a major spoiler about how this film was made that could either make or break it for you. While I think knowing the spoiler going in can add something new to the experience, I also understand the fun surprise of finding it out after the fact. The filmmakers have been very open about this, even mentioning it in intros for the film at festivals, but if you want to be surprised, watch the film and come back. You have been warned.

The film blurs the line between reality and fiction. This bar is not located in Las Vegas but rather New Orleans, nor is it closing anytime soon. The only parts actually shot in Vegas were any noticeable exteriors near the beginning and end, as well as the various scene transitions. The filmmakers redecorated the bar to how they want it to look, adding in cheeky touches but never taking away from the realism. The patrons are local bar-goers all coming together in one place with some cues from the directors but otherwise completely improved and complete themselves.

Being this strange hybrid of verité and staged documentary, it feels unlike anything I’ve seen recently. However, it does seem like a student of the American films of the 1970s. Films from directors like Robert Altman, John Cassavetes, and the Maysles Brothers all feel burned into this film’s DNA. Just because some of it may be staged does not mean that it does not feel real. The amount of honest vulnerability and pain shown on-screen feels soul-baring. There are multiple shots of older men silently crying to themselves, sometimes for a multitude of reasons.  They discuss topics ranging from grief, veteran support, alcoholism, homelessness, heartbreak, and sometimes all of those at once.

Another interesting aspect of the documentary is that it was shot in November 2016, right before the election, and it is barely mentioned, which honestly feels so refreshing. There is some brief news coverage and a discussion on what some people think will happen if Trump gets elected and the outrage that will cause (hello, foreshadowing), but otherwise, it is not a priority and that feels appropriate.

Perhaps the best part of the film is its cinematography, enhanced by the red and neon bar lighting that creates this red hue and kaleidoscope of color over everything. The shots are messy but purposeful and choose to highlight something minuscule in a particular moment that can end up being quite powerful. Probably the best scene in the film involves the daytime bartender performing a song on guitar. Right before this, Michael (presumably our main character) is pressured to but refuses to sing. However, as the bartender sings his lonesome song, the camera slowly moves to the mirror behind the bar to show us Michael’s reflection. His eyes are closed as he quietly sings along to himself, stopping when the song mentions terrible heartbreak and he evokes a sort of pain and anguish that feels more real and human than most things you will ever see in a film.

As far as qualms with the movie, it is a slower-paced film and if these people or this environment does not interest you, you’ll probably be bored. It’s a film that celebrates those smaller moments of people living on the fringes who typically don’t get the spotlight, so the slower pace feels justified but even I will admit that it can drag at times. That being said, we’re spending essentially 24 hours in a bar so that feeling does feel purposeful, but it can feel slow or a bit repetitive.

The film does a good job of transporting you to feeling like you are in this bar, but sometimes that means being unable to hear what is being said. As the night goes on, the music in the background can get so loud or just from multiple people talking at once, it can be very hard to make out what people are saying at times. Again, it feels purposeful, almost like the type of drunken bar conversations where you barely hear and it really doesn’t matter, but it can be frustrating as a viewer.

By far the thing that I would tweak or change about this film is its use of transitions between scenes. I like them and appreciate them being there (the use of music and visual adds an interesting artistic element to the film), but they are almost too frequent, almost like they are trying to fill a longer runtime by adding these couple second clips and visuals. On the flip side of that, there is the aspect of a timestamp introduced early in the film, to show the time of day and how much time has passed. However, these are not used frequently enough. We get two in the beginning, one in the morning and one in the early afternoon, and then none again until near the end at like 4 am. As a viewer, you forget that this had been used previously and then wonder if they just forgot that they were including them. Either get rid of that altogether or add more periodically throughout the film as check-ins.

This was one of my favorite films at Sundance earlier this year, but I also feel like the target audience for a film like this. Beyond being a massive fan of the ‘70s filmmakers I mentioned before that felt like inspirations, my parents owned a bar until I was six years old. They took me to the bar before taking me home from the hospital when I was born; I grew up in a place like this. Even though I am not from Las Vegas (or New Orleans), I still felt like I knew these people and this felt like home. Now, living in Philadelphia (and before the pandemic), I still have a soft spot for smoke-filled, shitty neighborhood bars with cheap beer and good times. And if you feel like you’ve missed that feeling or something like it, then “Bloody Nose, Empty Pockets” film just might be the perfect escapism for now.