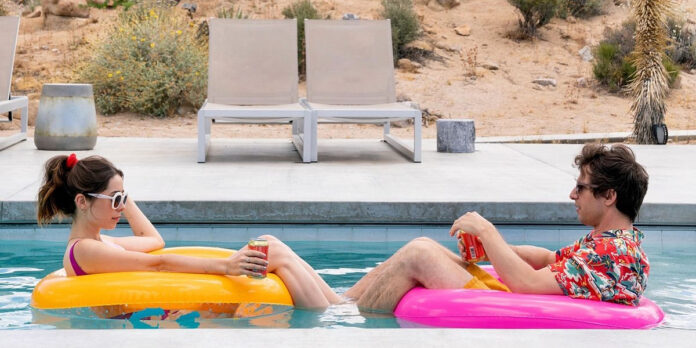 Every review of “Palm Springs” that you read is going to mention “Groundhog Day”. It’s inevitable, and this review is not going to avoid that comparison. The stuck-in-a-time-loop storyline has been used across all types of films, including horror (“Happy Death Day”), sci-fi (“Edge of Tomorrow”), and more. So for “Palm Springs” to use this micro-genre in a romantic comedy,  it might seem like a risk that would certainly bring comparisons to the Bill Murray classic. What makes “Palm Springs” so special, however, is how it smartly has its time loop affect more than one person, which opens the otherworldly premise up to even more possibilities than we’ve seen so far. And it’s funny. Really, really funny.

This Sundance hit follows Nyles (Andy Samberg), an aimless man attending an acquaintance’s wedding, who quickly befriends the maid of honor, Sarah (Cristin Milioti). Through a rapid sequence of events, Sarah finds herself somehow repeating the day of the wedding over and over again. She quickly learns that Nyles has been stuck in the same magical quagmire for quite some time, and together they explore the possibilities of what this quantum conundrum means for them.

Having the focus of the film be centered around two losers (for lack of a better word) is a brilliant comedic decision that lends itself to endless antics and scenarios as we see them both play in and succumb to the meaninglessness of the time loop. We are treated to many montages of the duo getting into increasingly hilarious hijinks, and the premise never once gets repetitive or old. We also eventually learn of a third party that was dragged into the loop (a reliably funny J.K. Simmons), which expands the comic and story possibilities even more. With more than one person in the time loop, both the dramatic and comedic stakes are raised.

Our two stars both do a fantastic job of selling the mundanity of this mind-numbing existence. Andy Samberg turns in quite possibly the best work of his career, playing the type of person you wouldn’t want your friend dating without ever becoming annoying to watch. But the best part of the entire film is Cristin Milioti. This stage actress has made a nice career for herself on the screen in recent years as a character actress, appearing in memorable parts of “The Wolf of Wall Street” and the TV show “Fargo”, and in this leading role, she uses all of her various abilities to absolute success. She is funny and forlorn, with an entire world at work behind her large, expressive eyes. She does what all the best comedic performances do with ease – she plays the character as a real person who gets into funny situations, rather than as a character who seems to know they are in a comedy and only exists as a joke machine. She is a fully-formed, realistic character with a clear inner life and history. If the world is just, this is a performance that will get attention from, at the very least, the Golden Globes. She is magnificent.

“Palm Springs” isn’t just another “Groundhog Day” clone. It takes the inherently interesting concept of repeating the same day over and over and finds a way to explore new facets of this sci-fi premise. Without becoming overly intellectual, the film poses real questions for its audience. Is a life valuable based on how you live it every day or because of what you are aiming for in the long-term? And why do we so often get stuck focusing on our small mistakes rather than the huge possibilities of our lives? The way the film uses its time loop can be interpreted as a metaphor for any number of repetitive human behaviors. For example, the lead characters are often seen drinking to excess out of sheer boredom and resentment, and in a way, their repeated days can be seen as an artistic interpretation of addiction: the way it numbs you and causes the days to blend together. The screenplay allows for any number of other readings of its otherworldly phenomenon. “Palm Springs” is the perfect balance of hilarious comedy and insightful writing, and it does what all the best films should do – it makes us reflect on our own existence.