“both sides of the blade” 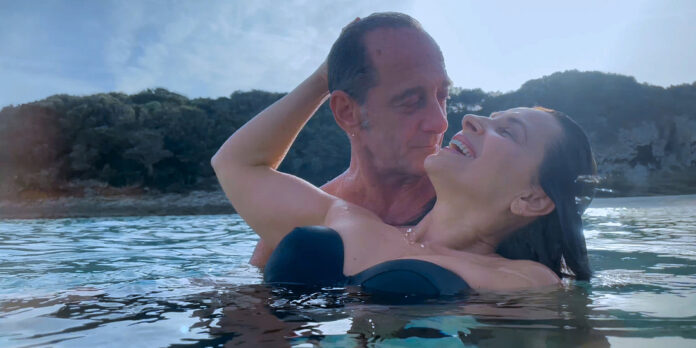 THE STORY – A woman’s relationship is upended when her former lover goes into business with her husband.

​​​​​​​​​​European Art Films get a bad rap. By reputation, they all involve sad wealthy people moping about in gorgeous locales, having sex while talking about philosophy, and with little to no plot. But so many of them are so much more than that. “Last Year At Marienbad” is a hypnotic dive into how memory can trick us; “Cléo de 5 à 7” is a warmly humanistic story of a woman in limbo waiting on a cancer diagnosis; “Amour” is a chilling look at what happens to our bodies and minds as we age and lose those closest to us. Claire Denis is a master filmmaker whose own films have often put the lie to these criticisms, but her latest, “Both Sides Of The Blade,” (which just recently screened at New York’s Rendez-Vous with French Cinema as the Opening Night film) is the kind of film that proves them right.

Sara (Juliette Binoche) and Jean (Vincent Lindon) have a complicated history but are currently married and seemingly very much in love. Jean’s mixed-race son (Issa Perica) from a prior relationship lives in the custody of Jean’s mother (Bulle Ogler) in the Parisian suburb of Vitry and is going through a typical teenage phase of acting out. One day, on her way to work as a radio presenter, Sara sees her ex François (Grégoire Colin) and is overcome with emotion. Unbeknownst to her, François, who is that aforementioned complicated history between Sara and Jean, is opening a sports agency and has reached out to former rugby player Jean about going into business with him. This reappearance of François wreaks havoc on both Sara and Jean individually, as well as on their relationship. Sara freely admits to Jean that she still loves François and always will, on some level, openly flirting with François in front of everyone. Jean dodges her questions about the new business and starts staying out late. The two stop communicating and suffer for it.

In the opening act, “Both Sides Of The Blade” is styled like a melodrama. Jean and Sara are blissfully happy at the beach, smiling, swimming, and kissing in the golden sunlight. Then Sara sees Jean, and the score by Tindersticks goes into overdrive to match Binoche’s outsized gestures. After this, as the love triangle emerges and gets more complex, the film becomes heavy with portent as DP Eric Gautier separates Binoche and Lindon more and more, and the score emphasizes the cinematography’s increasingly prominent shadows. Denis stretches this atmosphere until it snaps, with Sara and Jean erupting into a series of increasingly loud, increasingly physical arguments in the film’s last act. It’s melodramatic, for sure, but good melodrama always has its roots in honest emotion, no matter how heightened, and “Both Sides Of The Blade” doesn’t feel very honest at all. Sara and Jean have been together for about a decade and have been through hell and back already. Yet after the first couple of scenes, they suddenly lose whatever connection they had, rarely talking to each other and barely telling the truth when they do. There’s something to the idea of François as a destabilizing force, but the filmmaking never seems to support this. Instead, the film primarily emphasizes Sara and how being close to two men she loves (one of whom she left for the other) is causing her to come undone.

Granted, when you have Juliette Binoche as the lead in your film, you’ll probably want to focus on her as much as possible. Binoche is one of our most perceptive performers, able to distill a character’s conflicting emotions and agendas down to a simple glance. She is absolutely ravishing here, summoning all of her charisma and talent to make Sara feel like a real person and not the idea of modern womanhood that she is in the script. Lindon matches her beat for beat, letting his capacity for underplaying serve the film’s first half until his volcanic rage takes over. The two are at their best when getting into an argument, flinging long-held resentments at each other while grabbing for new ones to replace them. The problem is that these scenes come at the end of the film, long after both characters have lost any sympathy and interest.

By this point, Sara and Jean feel less like people than they do exercises for the actors playing them, almost completely divorced from any notion of how people actually speak or act in the world. Sure, it’s one hell of an acting exercise, but it makes the film feel empty – just two miserable affluent people moping around a beautiful Parisian apartment, alternately having sex and speaking in opaque, effortfully artful dialogue. This results in a deeply unpleasant film to watch, and not in a way that feels purposeful. Despite the two white-hot performances at its center, “Both Sides Of The Blade” will leave you cold.