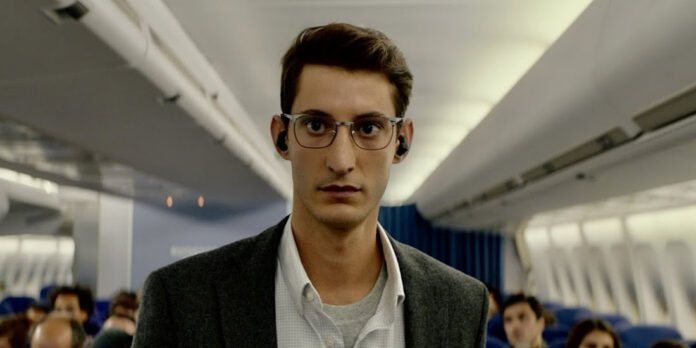 THE STORY – A young and talented black box analyst is on a mission to find the reason behind the deadly crash of a brand new aircraft. Yet, when the case is closed by authorities, he cannot help but sense there is something wrong with the evidence.

​When Bong Joon-ho said, in his Oscar acceptance speech, “Once you overcome the one-inch tall barrier of subtitles, you will be introduced to so many more amazing films,” I’m not sure that a mainstream thriller about a sound engineer unraveling the mystery of a plane crash through analyzing the sound recordings from the plane’s black box was what he had in mind. Nevertheless, that quote was all I could think of while watching Yann Gozlan’s César Award-nominated “Black Box.” A top-notch paranoid thriller that counts among its forebears Brian De Palma’s “Blow Out” and Alan J. Pakula’s 70s masterpieces like “The Parallax View,” “Black Box” is so perfectly thrilling that it could easily become an even bigger hit here than it was in France… if only American audiences would just heed Bong’s advice and go to the theater to see films in other languages.

Matthieu Vasseur (Niney) is one of the best sound analysts in the French aviation administration. His sensitive ears pick up sounds that no one else can. Still, his blunt demeanor hasn’t won him many friends, aside from his wife Noémie (Lou de Laâge), also in aviation administration, and longtime buddy Xavier (Sébastien Pouderoux), the CEO of a security corporation that also works with airlines. In fact, his brusqueness and insistence on his own correctness leave him sidelined when a plane carrying 300 passengers from Dubai to Paris crashes in the Alps. But when his boss goes missing after the first night of analyzing the black box voice recording, the higher-ups put Matthieu on the case. While it at first seems like an open-and-shut case of terrorism, Matthieu also puts himself on the case of his boss’s disappearance and discovers that he might be in the middle of a dangerous conspiracy, one that even those closest to him might be a part of.

The plot provides a solid base, and Gozlan works with the screenplay to keep things moving forward at a steady clip. He creates a tremendous feeling of dread right from the start with an extended tracking shot backward through the doomed plane and pushes that feeling even further when the sounds of the crash cut to a muffled silence as Matthieu puts on his noise-canceling headphones and listens to the audio from a helicopter crash he’s investigating. In only a couple of minutes, Gozlan has trained us to use our ears just as much as our eyes while watching this film and proceeds to tell the story of how Matthieu begins to question his own hearing. The César-nominated Niney turns in a perfectly calibrated performance, earning our sympathy even though Matthieu isn’t a very sympathetic person. He’s all business, all the time, and seems to expect that everyone will stay as perfectly logical at all times as he does. But his sensitive ears can lead to him being overwhelmed by the sensory assault of the world, especially when he’s stressed, and Niney never overplays these moments, letting the film’s incredible sound mixing do most of the work. Most of the film is scenes of Matthieu just listening to recordings, and Niney’s minimalistic performance makes us attuned to even the slightest change in his expression. Gozlan manages to make these scenes fraught with tension, using camera movements that start off subtle but grow more expressionistic as the pressure closes in on Matthieu.

It helps significantly that the conspiracy plot isn’t too convoluted; the screenplay doles out information in drips and drabs so that we’re right with Matthieu as he goes about his investigation, and the sterling sound work ensures that nothing gets lost in the mix. While you could put the pieces together a bit before Matthieu does, the big revelation still contains some new information and deepens some characters at the same time. It’s also notable how seamless the film makes the story’s exposition – it is not boring for even one minute of its two-hour runtime, and a surprising amount of the plot is told without much dialogue at all. Several wordless scenes crackle with tension, aided by Philippe Rombi’s classical thriller score (nominated for a well-deserved César alongside the film’s screenplay, sound, and editing).

“Black Box” is the type of classically well-made thriller that Hollywood used to crank out like clockwork at least a few times a year. But as audiences have started to go to the theater for a narrower swath of films, usually of the visual effects extravaganza variety, these types of films have fallen out of fashion. But it’s a tight, taut thriller that will keep you on the edge of your seat. That it’s paired with a story that feels like it could very easily be ripped from the headlines is just the icing on the cake. The social climate of the 2020s is ripe for the comeback of a 70s-style paranoid thriller, and if this is any indication, there are people out there who make ’em like they used to… if you’re willing to get over that one-inch barrier of subtitles.