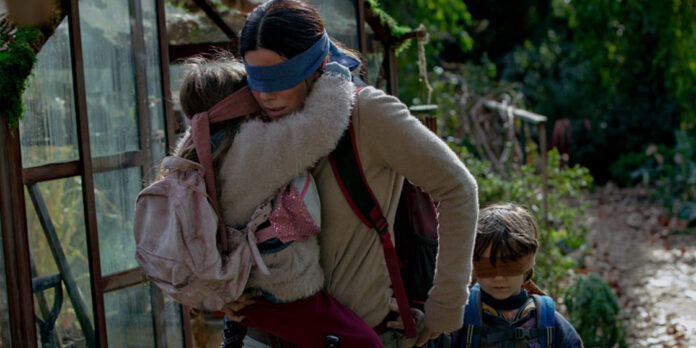 THE STORY – When a mysterious force decimates the population, only one thing is certain — if you see it, you die. The survivors must now avoid coming face to face with an entity that takes the form of their worst fears. Searching for hope and a new beginning, a woman and her children embark on a dangerous journey through the woods and down a river to find the one place that may offer sanctuary. To make it, they’ll have to cover their eyes from the evil that chases them — and complete the trip blindfolded.
​
THE CAST – Sandra Bullock, Sarah Paulson, Trevante Rhodes, Jacki Weaver, Rosa Salazar, Danielle Macdonald, Lil Rel Howery, Tom Hollander, Colson Baker, BD Wong & John Malkovich

2018 is the year for sensory deprivation Sci-Fi/horror films. First “A Quiet Place” deprived its characters of the abilities to make a sound, now “Bird Box” deprives them of the ability to see. What do they both have in common? They’re above average thrill rides that teeter from brilliant to aggressively mediocre. Between the two, “Bird Box” emerges looking better, if for no other reason, it has something to say and because it has Sandra Bullock killing it with the second-best performance of her career.

Looking at a plot description, the “A Quiet Place” comparisons are justified. In “A Quiet Place,” if the creatures heard you, you were doomed. In “Bird Box,” if you look at the creatures, you will be driven suicidally insane. As such, much of both films’ plotting revolves around avoiding whatever might trigger their doom. Additionally, both films are a meditation on parenthood. Like Emily Blunt in “A Quiet Place,” Malorie (Sandra Bullock) is seven or eight months pregnant when the film opens. But that is largely where the similarities end.

Whereas “A Quiet Place” opts to skip over the initial destruction, “Bird Box” allows the world’s impending doom to unfold onscreen, first in flashes of news clips in the background, then in people acting strange in hallways, and finally in a white-knuckle sequence that forces Bullock and her sister (Sarah Paulson) to navigate a street filled with flipping cars and burning bodies. Emmy Award Winner Susanne Bier (“The Night Manager”), knows how to frame action adeptly. There’s a reason she was discussed as a potential James Bond director. In these early moments, she ratchets up suspense to almost unbearable levels, evoking the chaos and fear of the opening sequences in films such as “World War Z” and “28 Weeks Later.” And then, the film settles from the macro to the micro: Bullock ends up cloistered in a house alongside a handful of survivors portrayed by a genuinely stacked ensemble (Trevante Rhodes, John Malkovich, Jacki Weaver, BD Wong, Lil Rey Howery, and Danielle MacDonald among others). Unsurprisingly, tensions flare, as claustrophobia, suspicion, and lack of food get the better of the survivors. Two of the women in the house are pregnant. John Malkovich’s litigious alcoholic unsurprisingly hates everyone and loves to wave a loaded shotgun around.

Although most of the film focuses on these claustrophobic moments, we jump forward to the future, showing Bullock navigating a river alongside only two survivors. From the start, you know things won’t go well. But how the numbers dwindle leaves plenty of room for surprises. And it’s these river cutaways, where the film shines the most. Bier’s direction is dynamic. She uses drones and dollies to create a sense of propulsive momentum that echoes the dangers of a rapid-filled river. Salvatore Totino’s (“Spider-Men: Homecoming“) foggy cinematography is utterly haunting. There is a sense of dread and the unknown every time we flash forward. We know Bullock will make it out of the house alive, but once the narrative brings her to the river, anything can happen.

And that house…Bier serves admirably to elevate proceedings and to heighten claustrophobia and suspicion, but she is hindered by a screenplay courtesy of Eric Heisserer (“Arrival“). Heisserer provides crucial character background information in cringey exposition dumps early on. And of the amazing ensemble cast of characters in the house, most are one-note. Of the supporting characters, only Rhodes and Malkovich are able to lend their characters much identity. Even worse, Heisserer has written comic relief moments into the script that don’t always land, while some moments that are intended to be dramatic read as unintentionally comical.

Bullock’s character, on the other hand, is a force of nature. This may be more due to Bullock’s gifts as an actor than to the writing, but we see her transform from a borderline misanthrope who certainly has no interest in her own child, to a warm presence who revels in human contact, and finally to a ruthless, no-nonsense post-apocalyptic machete-wielding badass who promises two kids that “she will hurt them” if they don’t obey her. And that’s the film’s beating heart: it’s about Bullock learning what it means to love someone else, to be a parent, to make sacrifices. We see that storyline on the river. And by the time the film reaches its conclusion, the emotion surrounding that plotline is real. Bullock has earned it by the strength of her performance. Though likely not in the Academy’s wheelhouse, it is one of the strongest performances of Bullock’s career. Her many emotional layers are gutting. You never once doubt her strength, determination, and ultimately, the love she carries for those around her. The film could have benefitted from cutting about 20 minutes of the slow-burn to Bullock’s final role in the film’s narrative because again, the heart that is shown here is where the film comes alive.

Technically, “Bird Box” is well-crafted but aside from its cinematography, it never rises above and beyond. The sound design is competent, though the team doesn’t have as much fun with the sensory-deprivation audio as the “A Quiet Place” team did. Trent Reznor and Atticus Ross create their least-intrusive score to date. It’s acceptable of course but it lacks the identity of their David Fincher collaborations, or even their work in “Mid90s” earlier this year.

And yet, when the film works, it really works. Its exploration of parenthood and post-apocalyptic psychology is more fleshed out than in “A Quiet Place” and Bier nails the suspense and dread very well. Sandra Bullock’s performance is masterful. However, the film is too long, overstuffed with characters and its writing is often clunky. But there is a raw power to the proceedings, and its bloated length does have the benefit of allowing the viewer to completely believe that Bullock’s character would make an almost 180 character transformation over the course of five years. “Bird Box” will never end up in the all-time sci-fi/horror pantheon. But it will serve as a meaty late-night viewing reminder as to why Sandra Bullock is a national treasure and it also gives Susanne Bier another chance to demonstrate her considerable talents behind the camera.