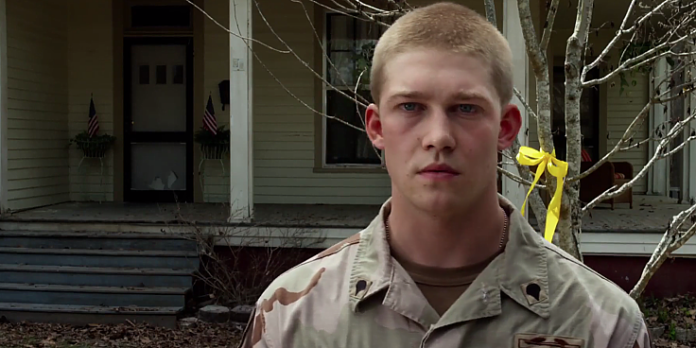 THE STORY – Nineteen-year-old private Billy Lynn (Joe Alwyn), along with his fellow soldiers in Bravo Squad, becomes a hero after a harrowing Iraq battle and is brought home temporarily for a victory tour. Through flashbacks, culminating at the spectacular halftime show of the Thanksgiving Day football game, what really happened to the squad is revealed, contrasting the realities of the war with America’s perceptions. Based on the novel by Ben Fountain.

​It is with a heavy heart that I report that Ang Lee’s newest film, “Billy Lynn’s Long Halftime Walk” is a complete misfire from the legendary and versatile director. Ang Lee has always pushed the envelope in his career from doing a period costume drama with “Sense And Sensibility,” to a comic-book superhero film in “Hulk,” to the extravagant special effects spectacle known as “Life Of Pi.” After winning his second Oscar for Directing the later, it would seem that Ang Lee was perhaps in desperate need to outdo himself from his previous effort. The result is to shoot a contemporary war film in 120fps, the highest ever attempted, in 4K resolution and show it to the world in 3D. The result is an ultra hyper-realistic effect that is just as distracting as it is wondrous.

After a harrowing Iraq battle is captured on film for all the world to see, nineteen-year-old private Billy Lynn (Joe Alwyn) returns home to receive the Silver Star and is honored as a hero by the country he swore to defend. He and his fellow soldiers in Bravo Squad are asked to go on a victory tour culminating in a Super Bowl Halftime Show in Texas with a Destiny’s Child performance and even a potential move deal in the works from their agent Albert (Chris Tucker). Billy, along with his staff sergeant David Dime (Garrett Hedlund), must work with the football team’s owner (Steve Martin) to broker a deal, which if their story is optioned will provide the young men with monetary compensation for their efforts. Billy is hoping to take care of his sister Kathryn Lynn (Kristen Stewart), even though she plans to keep him home now that he is back. As the game’s halftime show commences, Billy starts to have flashbacks to his time in Iraq and his time with Staff Sergeant Shroom (Vin Diesel). As the events which unfold prove to be drastically different than what the American people have perceived, Billy Lynn struggles with the cost of defending his country.

Instead of focusing right away on the technological advancements that Ang Lee and two-time Academy Award-winning cinematographer John Toll have created for this film, we first need to look at the film itself. Most people will not see it as Ang Lee intended, so with that said, how does the rest of the film stack up? The results are also mixed and teeter into the quite disastrous territory more than once. It seems that Ang Lee was so focused on the visuals and highlighting this story as best he could through the camera that he forgot to direct a scene. Characters utter terrible dialogue to one another throughout and sound absolutely ridiculous. If a film begins with its screenplay, then “Billy Lynn’s Long Halftime Walk” was doomed to be a failure early on and there was not much that even a director with the skill of Ang Lee could do to save it. Even the big battle scene which is heavily built up to fails to ignite any excitement into the picture as Lee ceases to meet our expectations for what he could have delivered in such a scene.

As far as the performances go, Joe Alwyn delivers a breakthrough performance that is actually quite good as he shows a lot of range both physically and emotionally. Billy Lynn is a complex character who is going through a whirlwind of a time after coming home from Iraq and Alwyn sells every moment as best as he can. Garret Hedlund is also quite convincing as his no-nonsense staff sergeant. I signal out these two because they take up most of the screentime. While others have been clamoring for Steve Martin and Kristen Stewart to be good enough in their roles to warrant any awards consideration, their roles manage to be underwritten and they are not afforded enough screen time to wholly deliver on meeting our expectations. The worst performance though has to go to Makenzie Leigh as one of the football team’s cheerleaders, Faison Zorn, who steals Billy Lynn’s heart with laughable dialogue that will make you cringe all the way until the ending credits.

And now onto the technical aspects of the film. The cinematography by John Toll does not allow for the actors to be able to wear any makeup and to limit the use of any artificial lighting. The result is a clean and sharp look that appears so real that it feels like it should belong on an HBO television show than on film. Think of it as you having the highest quality 4K Sony HDTV money could possibly buy you. Now turn on the Auto Motion 240Hz feature and watch as characters move so fluidly that it doesn’t even look natural and that’s the effect of “Billy Lynn’s Long Halftime Walk.” Imagine that and you’ll have a pretty good idea before you even go in if this new visual breakthrough is going to be for you or not. The film editing is odd to say the least by Tim Squyres, as unusual and discomforting scenes are left in such as Billy Lynn imagining having sex with Faison and snippets of the movie flash before our eyes as if we needed to witness all of the horrendously put together scenes again. The music by Jeff Danna and Mychael Danna goes for a country western vibe that also feels forced and fails to bring any emotion out of the events unfolding on screen.

Was all of the hype worth it? Sadly no. “Billy Lynn’s Long Halftime Walk” is not a very good film from the excellent two-time Academy Award Winning director Ang Lee. It’s still interesting to watch the talented filmmaker push the boundaries of what is possible in a film with the high frame rate technology he employs throughout. Sadly, as Peter Jackson learned a few years ago when he decided to shoot his reviled “The Hobbit” trilogy in 48fps, if cinema ain’t broke don’t try to reinvent it. And if you’re going to do it, pick a better script next time.