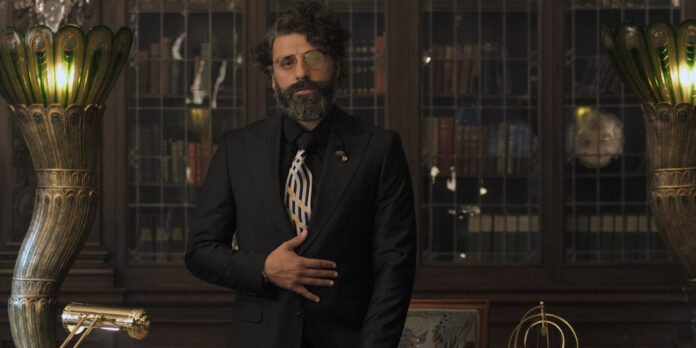 THE STORY – An enigmatic, middle-aged father of two enlists the help of fledgling writer Samuel Liston to pen his biography. The circumstances leading up to the arrangement are astonishing, and efforts to write the biography are quickly stymied by ensuing chaos.
​
THE CAST – Emory Cohen, Andy Garcia, Megan Fox, Lucy Hale, Oscar Isaac, Shiloh Fernandez & Frederick Schmidt

​A young author writes a successful novel titled “With Bricks of Gold.” It’s a story described as astonishing, and maybe it is on the page, but that is not translated on screen. At first, Brian Petsos’s “Big Gold Brick” creates curiosity through its experimentation with tone and head-trippy visuals, creating this expectation of a surprising viewing experience. But confusingly, while having a lot going on, it has nothing going on at the same time.

Executive produced by Oscar Isaac and Kristen Wiig, “Big Gold Brink” finds its lead, Sam (Emory Cohen), at his wits’ end. After suffering through a long period that has felt like one horrible endless day, he decides it’s time to go. At first, it is unclear if he naively believes running away from his problems is the solution, but once he steps in front of a car, you realize he meant “going” with permanence. The scene, drenched in the red of tail lights, carries a hint of a suspense thriller in its score as this accident repeats itself on a loop at different angles. The title card scrolls over and then shifts to a classical music score, like a scene in a high drama. The shifting score continues throughout the film, accompanied by scenes that match perfectly, highlighting the film’s fluid tone as a strong point. It’s a dark comedy that impresses more with its horror-thriller elements as Sam attempts to crawl out of a dark abyss.

This act of ending his life also changes it in a way Sam wouldn’t expect. He miraculously lives and remembers nothing of the accident. The film’s themes of coincidence and fate come into play as he meets the driver, Floyd (Andy Garcia). He’s a dapper, rich-looking man who has stayed at Sam’s bedside. Floyd learns that Sam is a writer and asks him to write his biography. This is a strange request under the circumstances, and it is unclear if Floyd is playing on Sam’s vulnerability or somehow attempting to avoid a legal case. Nevertheless, Sam needs cash, so he accepts.

Invited to stay with Floyd as he writes, the audience is properly introduced to his family. Playing the seductive Jackie, an attorney, and Floyd’s second wife is Megan Fox. Unfortunately, this role wastes Fox’s talents and plays on stereotypes. Perhaps that’s done purposefully to poke some fun at how she has been inaccurately viewed. Regardless, she’s wasted. Making up the rest of the family is Floyd’s daughter Lily (Lucy Hale). She’s a violinist-turned-drug addict now working in a library until she can figure out what she wants to do. Finally, there’s Eddie (Leonidas Castrounis), a mischievous loner high on the psychopathy scale. We learn quite a bit about every character, except the patriarch. Who Floyd is and why he feels worthy of a biography is a question that hangs over the bulk of the film’s runtime. We learn he works in security and has done, according to him, some “great things,” but instead of letting the audience know what those things are, we are treated like a reader who will learn about him when the time is right. But that time comes too late, and after many months of Sam following Floyd around with a notepad in hand, the direction that Sam struggles to find for his novel turns into one about himself. Sam starts to write about his own journey inadvertently and struggles to overcome his destructive demons. The book becomes one about a much more interesting character and not who it’s said to be focused on.

Cohen’s performances impress as he transforms from someone struggling to overcome the destructive power of grief to someone who carries themselves with confidence and assuredness. For most of the film, Sam is awkward, anxious, and seems to be on the verge of a breakdown at every moment post-accident. Most of the film’s humor arises from Sam’s delusion that a Santa doll is speaking to him, like his demons manifesting to influence him. The film may not reach laugh-out-loud funny with its gags, but it provides a clear look into Sam’s psyche. The changes in him observed soon after the accident versus the composed author seen later is compelling to examine. However, while Cohen and his screen partner for most of the film, Andy Garcia, are engaging and fun to watch, the film is ultimately too dull for them to fully shine.

It would be remiss not to mention Petsos’s frequent collaborator, Oscar Isaac, in this cameo playing the wealthy businessman Anselm. Looking for Floyd to demand the return of something he stole, Anselm examines his victims with one fogged lens and one clear. Isaac’s line delivery is perfect, pronounced with a hilarious accent. He makes a big, entertaining impression for such a small role and shows a knack for comedy from the actor.

The biggest flaw of “Big Gold Brick” is that the audience is never made to care for Floyd. The bond between himself and his biographer isn’t strongly felt either, which causes the emotional moments between them to fall flat. The film loses steam just as you learn what you’ve wanted to learn about Floyd, but even that revelation can’t revive an already weak spark.