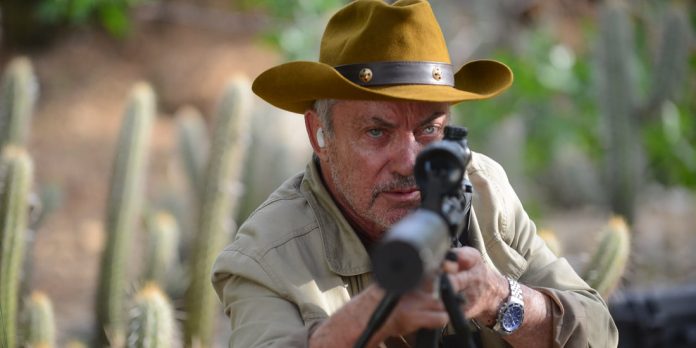 I know they say don’t believe the festival hype, but there are some films that are worth the hype. “Bacurau” is one of those films. It’s hard to explain what the film is about without revealing too much. It’s a film that needs to be experienced and absorbed. Whereas, “Monos” had a narrative that left me puzzled and frustrated, “Bacurau’s” narrative is such an intriguing puzzle that the viewer can’t second guess what will happen next. Writers and directors, Kleber Mendonça Filho, and Juliano Dornelles manage to weave together a complex plot that slowly unfolds in a bloody showdown that the likes of Quentin Tarantino and Sam Peckinpah would be jealous of. Google classes “Bacurau’s” genre as a ‘weird Western’ which it is, but it is also so much more. ​

​The film focuses on the small town of Bacurau, which finds itself subjected to some very strange happenings following the death of its matriarch at the age of 94. Suddenly, their little town stops appearing on satellites and GPS, and then the phone signals stopped working, and then there’s the strange arrival of two strangers just after the water truck arrives, riddled with bullet holes.

As mentioned before, to expand on the narrative of “Bacurau” would take away the satisfaction of finding out the story for yourself. The cinematography by Pedro Sotero is also remarkable, along with Mateus Alves and Tomaz Alves Souza score. It’s certainly a gory and violent film which will shock you, and I will give a word of warning to those who aren’t a fan of violent, bloody films…this is one you might want to pass on. However, for those who like their films to be an exhilarating thrill ride, then “Bacurau” will certainly tick all the right boxes.

Next up was “La Fille au Bracelet” (The Girl with a Bracelet), a courtroom crime drama from French director Stéphane Demoustier. The film centers around the trail of a young woman called Lise (Melissa Guers) who has been accused of killing her best friend. Her parents (Chiara Mastroianni and Roschdy Zem) do their best to stand by her and support her through this process, however as secrets begin to emerge about Lise’s personal love life and her emotional reaction to the event seems to be far too reserved, their suspicions begin to deepen.

“La Fille au Bracelet” is a very tense film, expertly written by Demoustier who manages to leave everything detail slightly ambiguous, so the viewer is left to come to their own conclusions. Guers delivers a stellar performance, and her character is presented as a complex young woman who is struggling to contain her emotions so decides to appear emotionless and calm in order to stay in control. The narrative slowly unfolds like a Hitchcock film of a Patricia Highsmith novel, and Guers’ Lise may be a cold-blooded sociopath who calculated the murder, but even if this is the case, we still feel empathy for her character. Both Mastroianni and Zem deliver strong supporting performances as Lise’s parents but as the narrative unfolds they come across as slightly out-of-touch and distant from their daughter. Overall, this is a slow film but one that has an impactful ending that is very open-ended, and will certainly generate much debate among viewers.

Lastly, there was Shahrbanoo Sadat’s “The Orphanage” (original title Parwareshghah), a film that follows a 15-year-old orphan called Qodrat in Kabul in the early 1980s, who dreams of Bollywood until the Soviets send him to a state-run Orphanage. The film’s main lead Quodratollah Qadiri is a wonderful presence in this film which is very much a coming-of-age drama that pulls on the heartstrings. In order to cope with the world around him, Qodrat has fantastical daydreams which consist of Bollywood style musical numbers, and in some respects, this reminded me of “Blinded by the Light” a film which also followed a young man coming of age against a dramatic political backdrop.

I also spent my day catching up on some wonderful shorts, including Lena Headey’s “The Trap” which really impressed me. Headey has proven herself time after time to be a magnetic presence in front of the camera, but with “The Trap” she manages to show us that she is also more than capable of sitting in the director’s chair. The film stars fellow “Game of Thrones” star Michelle Fairley as a woman who is a recluse and isolated until she meets a young man, however, there’s a dark secret from her past which threatens their future. I hope we get to see more from Headey as a director because she certainly feels like a natural one here.

Anyway, that’s me signing off for another day. I am off to bed now in order to get up nice and early to catch “The Lighthouse”…Now, I wonder if that’s going to live up to the hype?!