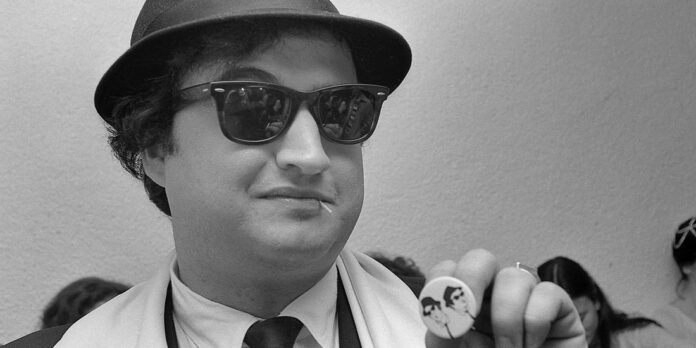 ​​​Only five short years passed from when John Belushi made his television debut on “Saturday Night Live” to his death in 1982. During that time, he made an indelible mark on the world of comedy, television, and film as a whole. Belushi developed a larger-than-life persona that lingers to this day, almost forty years later. If you, like me, only know Belushi for his work, R.J. Cutler’s Showtime Documentary “Belushi” will give you a much deeper perspective of the man – not just the performer.

“Belushi” is built around previously unreleased audio interviews of people close to Belushi, compiled by Tanner Crosby for an oral history of sorts. We hear from just about every big name you would expect, including Dan Aykroyd, Lorne Michaels, Harold Ramis, Jane Curtain, Carrie Fisher, Ivan Reitman, and his wife, Judy Belushi-Pisano. All of these and more help paint a personal picture of the comedian’s rise to superstardom. Archival footage and pictures, along with animated interludes, tie all of the interviews together. Because of this format, there isn’t a single piece of new or modern footage for this film.

That choice both helps and hurts this documentary. On the one hand, it creates an air of authenticity. We’re hearing from the people who knew him best. The interviews feel honest and open. On the other hand, with most of these interviews being almost twenty years old, it makes “Belushi” feel outdated and without a cohesive perspective. Additionally, without ever being able to see the interviewees on screen, it’s easy to lose track of who’s who and not be able to connect easily to the heart of the person talking. It was always refreshing when the film finally inserted footage of Belushi acting so we could see someone talking rather than a still photograph. There’s also some very stylized animation used to reenact some sequences of his life, which really helps to bring some much-needed visual interest.

Even so, “Belushi” is still able to illustrate a new side to the actor that I was unaware of. The most illuminating elements are letters from Belushi to his wife, written all throughout his life. These letters, read poignantly by Bill Hader, are so open and honest. It paints the picture of a man constantly in touch with his feelings, someone searching to make himself better and expressing deep love for his wife. While the interviews are nice, these letters are revealing and intimate.

The documentary covers Belushi’s entire life to give us a sense of how his upbringing influenced his career. The son of Albanian immigrants, Belushi inserted many of his experiences into the outlandish characters he became known for. His famous “Cheeseburga” diner owner character from SNL was said to be largely based on his father who owned a restaurant. We get to hear the story of Belushi’s father wanting him to take over the family restaurant, which is really personal and eye-opening. Belushi turned him down in order to pursue his dreams of being an actor.

Toward the end of Belushi’s life, again, it’s the letters to his wife that are the most revealing. As the film describes his post-”SNL” years, there’s not a huge swath of new information, but we get to see some tragic honesty in his letters that reveal his declining mental health as he relied more heavily on substances. There are even ominous realizations as he admits his drinking and drug use is dangerous. These personal revelations bring so much more weight to the story of his life.

The letters, and Hader’s reading of them, make this film shine. It’s the audio interviews that hold it back ever so slightly, if only for the form, not the content. Still, “Belushi” honors the man well and gives a new perspective for a casual fan like myself. If nothing else, it’s a needed reminder of the incredible impact he was able to have in a relatively short amount of time.