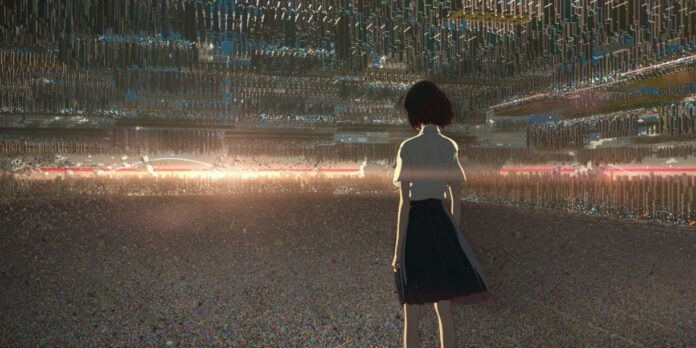 THE STORY – A high school student becomes a globally beloved singer after entering a fantastic virtual world. She soon embarks on an emotional and epic quest to uncover the identity of a mysterious beast who’s on the run from ruthless vigilantes.

“Welcome to the world of U,” the virtual society of “Belle” beckons. In this Japanese animated film, five billion users take on whimsical avatars to enter a magical digital world. One teenager uses the world of U to find her voice but soon discovers that a rapid rise to fame comes with its challenges and that living a double life can only last so long. Written and directed by Mamoru Hosoda, “Belle” premiered at the Cannes Film Festival in 2021. The film is about how teens use the internet, about a young girl grieving the death of her mother, and a loose retelling of the classic tale, “Beauty and the Beast.” If it sounds like that’s a lot for a two-hour film, that’s because it is. Sadly, to its detriment.

Seventeen-year-old Suzu (voiced by Kaho Nakamura) is a high school student in a small town in Japan. Once a happy, musically gifted child, she has been forlorn and withdrawn since her mother’s death several years earlier. She struggles to understand why her mother risked her life to save another and feels that she willingly abandoned her. Distant from her well-intentioned father and most of her classmates, Suzu’s only real friend is the snarky hacker Hiroka (Rina Izuta). When Suzu discovers U, she creates an avatar named Belle that’s physically inspired by the most popular girl at her school, Ruka (Tina Tamashiro). But each avatar is meant to bring out its user’s inner skills, and Suzu’s is that she has a gorgeous singing voice. While Suzu hasn’t been able to sing since her mother’s death, she finds her voice (literally) in the digital world. Belle’s singing and loveliness make her an overnight sensation, which thrills Hiroka, but finds Suzu intimidated. However, this shy wallflower soon comes to enjoy spending time in a world where she feels seen in a way that she doesn’t in her life at school. Enter the Beast, also known as “the Dragon” (Takeru Satoh), a creature known for his impressive fighting skills and the eye-catching scars on his back. He is being pursued by the Justices, a group of avatars in superhero costumes who try to maintain order in U by “unveiling” the identities of those they disapprove of. Suzu becomes intrigued by the Dragon and discovers that everyone has their own secret.

Unfortunately, “Belle” has such a complicated plot that Hosoda is unable to resolve every part of it by the end of the film. Some, like Ruka’s crush on a boy at school and Suzu’s own feelings for a childhood friend, feel rushed while the beginning of the film drags. Other sections of the story feel underdeveloped to the point where the messaging is unclear, particularly a part that deals with child abuse. The character of Hiroka is one of the weakest in the film as her snide comments towards Suzu go beyond trying to help her friend open up and seem more like bullying at times, which is also never addressed.

What’s most interesting about “Belle” is how Hosoda presents teens’ relationships with the internet. In children’s films, technology often serves as an antagonizing force, something that’s preventing humans from forming connections. However, this film has a more complex approach to it. While U highlights cyberbullying and the ways in which internet fame can be overwhelming, it also shows how people who may feel completely unseen in their everyday lives can find a voice through the internet and connect with others. It’s a dichotomy that many of us know all too well, particularly anyone who spends time on “Film Twitter” or any other corner of the internet. They can be very frustrating places, but they also can give birth to many friendships and professional connections. These are especially important for those who don’t have friends in their daily lives that share their passions.

“Belle” is worth seeing for its beautiful animation alone, but the music is equally as impressive. The J-pop music of the film is stunning to listen to and perfectly compliments the awe-inspiring visuals, particularly in the fanciful world of U. The bright colors of the online space contrast with the more muted grounded scenes in “normal” life, as the film goes back and forth between them resulting in a vivid animated experience whether you’re watching it on the small or big screen. The fresh take on “Beauty and the Beast” helps “Belle” to stand out amongst a crowded animation landscape providing a familiar story that feels new due to its setting and sense of style. While its plot has some issues and it tries to fit too much into its runtime, Mamoru Hosoda’s “Belle” is a mesmerizing examination of how we interact both online and in person.