“IN THE SAME BREATH” 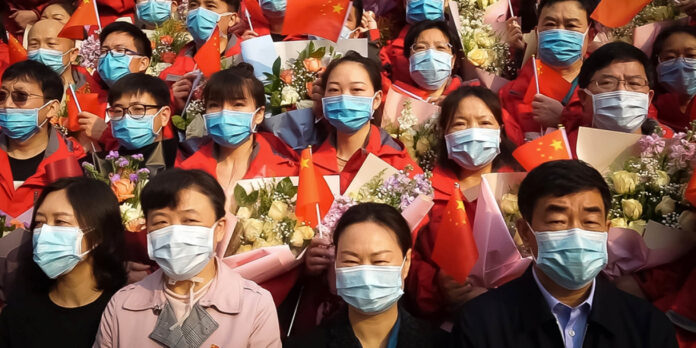 THE STORY – A look at how the Chinese government turned pandemic cover-ups in Wuhan into a triumph for the Communist Party.

​​​When thinking back to January 2020, the start of a new decade brought so much promise and joy. I even set goals – which I never do – to find a new job, travel more, and “treat myself.” It was going to be an exciting year for everyone involved. Therefore, it is no wonder why the New Year’s celebration in Wuhan, China, which is filled with massive crowds and beautiful balloons, is precisely where Nanfu Wang chose to begin her documentary “In the Same Breath.” It all looks gorgeous until she utters those killer words: “This was the last moment I can remember when life still felt normal.” You know exactly what she means.

Wang, who was in Wuhan to celebrate the Chinese New Year with family, had to head back to the United States on January 23rd, 2020, for a business trip. That same day, the Chinese government announced it was locking down the city. In the weeks and months to come, hospitals would be overrun, the death toll would grow, and government officials would refuse to admit the truth. Through the help of camera crews inside hospitals, news reports, and interviews with health care workers and others dealing directly with the pandemic’s effects, “In the Same Breath” takes viewers back to the early days of the COVID-19 pandemic, even if it feels almost too soon to revisit. But with new variants and surges almost routine at this point, it makes it vehemently important.

At the core of this film is the importance of truth-telling, which Wang shows is not a guarantee from leaders or state-run media. On January 1st, 2020, television reports nonchalantly stated that “Eight people were punished for spreading rumors about an unknown pneumonia.” Of course, knowing what we know today, that “unknown pneumonia” changed the world. During the annual People’s Congress, which took place over two weeks in January, somehow no new cases were reported in the country. But hospital footage from Wang’s crews, as well as eerie security footage from a clinic in December, show that was far from the truth. Watching all of this is quite frustrating and makes one wonder how any government could keep such vital information from its people. That is until Wang displays news reports from the United States. When we hear Dr. Anthony Fauci dismiss the use of masks, it is another slap-in-the-face, how-could-this-happen moment.

But all of that, as Wang points out, were ways governments tried to gain control and manipulate people in the most vicious ways possible. In China, aside from controlled news reports, videos from hospitals mainly focus on the “positive” aspect of the pandemic. At the same time, Wang’s camera crews captured distressing scenes, including families having to decide what to do with sick loved ones as hospitals reached capacity. In the United States, with some elected officials calling the virus a “hoax,” protests against lockdowns took hold throughout the country. It is harrowing to see, especially when Wang gives health care workers from both countries the time to recount their ordeals, all fighting back tears as they talk about the lack of resources or numerous deaths they witnessed.

It was quite upsetting to see how the two countries reacted to the pandemic and how their actions and messages weren’t too different. But Wang does leave plenty to be desired since she just scratches the surface with the United States’ response while she goes all-in on several coverups in China, like the country withholding COVID-19-related death counts. And similar to her interviews with Chinese residents, it would have been beneficial to speak with people in the United States who lost loved ones and struggled to get help to show another comparison between the two countries. Moments when Wang shares her feelings about the pandemic – like when she thought Chinese government officials were overreacting for taking a man into police custody for not wearing a mask outside or scoffing at the thought of wearing a face mask herself after her mother suggested it – made her seem quite empathic to what I’m sure many were thinking about in early 2020.

Wang’s film will weigh heavy on viewers as they relive those fearful first few months of the pandemic, but it will also remind them of the great strides made with the development of several vaccines and therapeutics. Perhaps the most profound moment of this documentary is the “what if” Wang poses at the end. What if the information was shared accurately and in a timely manner? What if those eight people who were punished were listened to? What if we were given straight answers from the people in charge? Where would we be now? There’s no way we can go back in time to stop it all, but we can only hope that we’ve learned valuable lessons along the way.