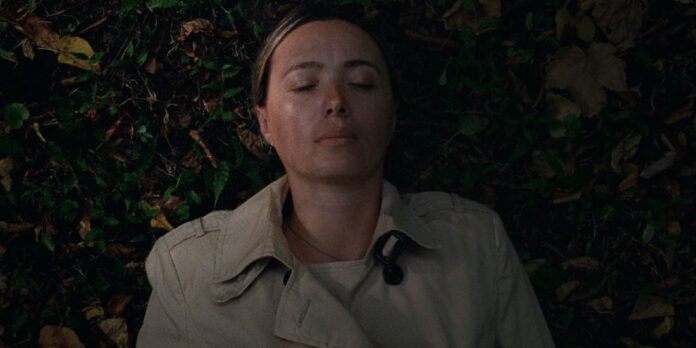 THE STORY – Submerged in feelings of restlessness, Yana (Ia Sukhitashvili) sees a stranger’s reflection looking back at her from the mirror. Alongside her son, George, and husband, David (Rati Oneli), she is a Jehovah’s Witness missionary in a predominantly Christian Orthodox mountainside village in Georgia. The isolated community of Witnesses is aghast when their Kingdom Hall is attacked during a service and the modest place of worship left in ashes. The steadfast couple now stands at the crossroads of continuing to reside in hostile territory and honouring their commitment to a higher power. David manages to obtain CCTV footage of the attack and Yana, who is searching for purpose in life, becomes fixated on justice. Her path to retribution leads her to a confrontation with a local police officer (Kakha Kintsurashvili) that triggers an irreversible series of traumatic events.
​
THE CAST – Ia Sukhitashvili, Rati Oneli, Kakha Kintsurashvili & Saba Gogichaishvili

​​​A somber character study can oftentimes be the source of an impressive feat of storytelling. When the tone is more focused and fixated, there’s potential to express so much on a thematic level while communicating very little. It can be difficult to make these efforts wholly convincing, but there’s an impressive result that creates a riveting portrait. There’s no doubt that “Beginning” aims to accomplish just that, and there are many tools in its arsenal that could lead it to a successful outcome. However, several other elements hold it back from becoming a truly inviting work of art.

The setting is in a remote village tucked away in the Georgian countryside. A small group of Jehovah’s Witnesses are dealing with the continued ostracization at the hands of a prejudiced community that surrounds them. The tension is only amplified after an arson attack burns down their church and pressure is mounting for the minister to withdraw any complaints. His wife, Yana (Ia Sukhitashvili), presents a stoic front for her husband but cannot truly hide the turmoil she feels in this desperate situation. An insidious police detective (Kakha Kintsurashvili) starts to encroach upon her inner circle, all while she prepares for her son’s baptism and wrestles with the many demons that are rising to the surface.

What is most striking here is Dea Kulumbegashvili making her directorial debut with such a profound statement. Her framing is stark and quiet, but always finds ways to feel engaging and dynamic. Combined with the efforts of the controlled cinematography, Kulumbegashvili’s eye captures the simmering intensity that lies below the surface that’s constantly on the brink of boiling over. None of this is more apparent than in the film’s opening, an unbroken take that shows the mundane worship of this community turning disturbingly violent in such a dramatic way. Her directing is deliberate, tense, and incredibly effective.

Unfortunately, the script doesn’t match the heights of the filmmaking. Within this story is a tale of characters navigating the different sides of oppression within the world and the constant struggle to tolerate all sides while maintaining one’s own identity. Sadly, the screenplay by Kulumbegashvili and co-writer Rati Oneli lacks the depth to make the storytelling truly compelling. This results in an oppressively slow pace that loses momentum, even when the exploration of these conflicts is interesting. As the film goes on, the quiet moments of introspection just end up feeling hollow and over-long, forcing so much of the emotional connections made to this material feel elusive. It’s a shame that for all of the skill behind the camera, the script doesn’t have the depth and complexity to make the length feel warranted.

The cast isn’t that deep of a bench, and there isn’t much to greatly praise beyond its protagonist. Sukhitashvili has a commanding stoicism that masks a fragile vulnerability, and she manages to portray these layers quite authentically. One realizes the suffocating nature of her character’s situation and the performance beautifully captures that internal conflict. It’s a mostly quiet turn that showcases powerful moments of devastation when needed. Oneli also appears in the film as Yana’s husband, though his presence is limited and performance is unremarkable. The villainy of Kintsurashvili’s character is quite reserved, outside of one moment of harsh brutality, and there’s an aura of reserved malignity within him. Still, his performance never breaks ground as an alluring figure to watch. He ends up with a character with not much nuance and plays him in a way that isn’t captivating to observe.

There are many characteristics to “Beginning” that are mighty impressive. The direction is a confident debut that utilizes arresting imagery to create a stark and effective gaze. All of this sitting on the shoulders of an impressive and layered performance from its leading actress is greatly appreciated as well. Unfortunately, the flat storytelling ends up making the film feel bloated and come across as oppressively dull. Not to mention many of the supporting performances are nowhere near as impactful as the star. One can have much respect for individual pieces that go into the craft of this film, but the deficiencies end up removing so much power from the more successful elements that it never crystallizes into the effective character study it could be.