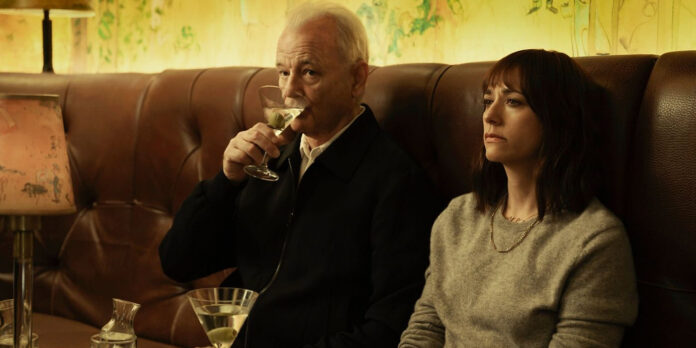 THE STORY – A New York woman and her impulsive, larger-than-life father try to find out if her husband is having an affair.
​
THE CAST – Bill Murray, Rashida Jones & Marlon Wayans
​
THE TEAM – Sofia Coppola (Director/Writer)
​
THE RUNNING TIME – 96 Minutes

​​​For over two decades, Sofia Coppola has been showing us her versatility as a storyteller with films such as “The Virgin Suicides,” “Marie Antoinette,” “The Bling Ring” and “The Beguiled.” She’s never been afraid to take risks and step outside of her comfort zone, making her one of the more exciting filmmakers we’ve seen come along in recent years. Her latest film “On The Rocks,” may be her lightest and most dialed back offering yet but it still possesses the same level of skill and craft that she has exhibited with her other feature-length films, making this run of the mill father-daughter dramedy better than average.

Laura (Rashida Jones) is a writer living in New York City with her husband (Marlon Waynes) and two kids. Suffering a creative blockage, she is growing ever suspicious of her husband’s close relationships with his female co-workers and the long hours he spends away from home. Questioning whether or not if she made the right choice in the life she is leading, she turns to the one person she believes can make sense of all of this for her: her father Felix (Bill Murray). A charmer who enjoys a luxurious life-style, Felix convinces his daughter to spy on her husband to discover the truth about his supposed infidelity, leading them all the way to Mexico and to re-examine their own relationship as father and daughter.

Touching on issues of trust and the relationships we share with our families, “On The Rocks” feels like a more personal film for Sofia Coppola than some of her other films. Think of it as a more commercial version of her 2010 film “Somewhere,” which was another father-daughter film from Coppola. This film is a lot funnier though and its ace-in-the-hole is Bill Murray, who Coppola has not worked with since their Oscar-winning collaboration of “Lost In Translation.” While Rashida Jones anchors the entire movie on her shoulders with her grounded and relatable performance, it’s Murray who steals the show (and when doesn’t he?). Playing a womanizing, charismatic, impulsive, and charming upper-class parent, Murray slides comfortably into the character’s eccentricities and plays them at just the right pitch, giving this character a heart of gold. It’s energizing but never distracting from Coppola’s overall vision and tone. One scene in particular where he’s speeding in a car and gets pulled over by a police officer, not only speaks to the character’s privilege but also his innate ability to talk his way out of any situation. “It must be very nice to be you,” Laura tells him afterward. As a child, how could you not look up to this human for advice on how to solve problems?

Coppola’s approach to the dialogue might come off to some as a more serious version of “When Harry Met Sally” in regards to discussions about men’s natural instincts when it comes to women, marriage, and the laws of attraction. It’s measured in its delivery and to be honest, I wish it went a little deeper. Coppola strikes a balance with “On The Rocks” being a more mainstream movie and it wholly integrating her naturalistic indie sensibilities as a storyteller. As a result, it’s a pretty straightforward story that plays out exactly as you would expect. The filmmaking is solid but never flashy (Coppola’s cinematographer Philippe Le Sourd captures Manhattan in such a realistically beautiful manner). The performances are fun but not what I would consider “great.” It’s a comfort movie, through and through. It doesn’t ask much of its audience, other than to spend some time with these wealthy New Yorkers who are going through relatable emotions such as self-doubt, creative struggles, and aging. And while that may not be the movie everyone necessarily wants right now, and especially from a filmmaker as bold as Sofia Coppola, it’s there if you want to take a sip, on the rocks of course!

Powered by JustWatch
Share
Facebook
Twitter
Copy URL
Previous article
The Next Best Picture Podcast – “Captain Fantastic”
Next article
The Force Is Racist With This One – “Red, White And Blue” At NYFF58