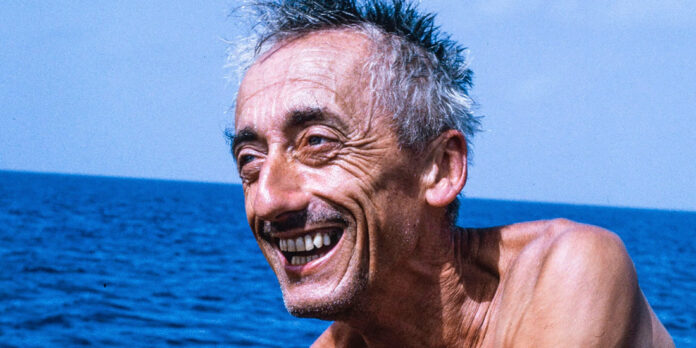 THE STORY – A look at the life, passions, achievements and tragedies surrounding the famous explorer and environmentalist Jacques Cousteau, featuring an archive of his newly restored footage.​

​​​​​There was a time not so long ago that the name Jacques-Yves Cousteau was one of the most famous in the world. From his ABC television specials in the 1960s and ’70s to his environmental activism in later years, Cousteau, with his trademark red beanie, became a figure whom adults admired, and kids adored. Such was the universal adulation that Cousteau’s boat, the Calypso, was even the subject of a 1975 pop hit by singer John Denver.

But in the years following the explorer’s death in 1997, things began to change. Yes, the name Cousteau was still vaguely remembered by many, but the awareness of the remarkable accomplishments achieved by Cousteau was beginning to fade from the public’s memory. Documentary filmmaker Liz Garbus and National Geographic were determined to change that. In 2015, Garbus began to woo the Cousteau Society for their blessing (and their film archive) to make a feature documentary on the famed explorer’s life. The courtship took five years, but in the end, the Society and Francine Cousteau, Jacques’s second wife and the protector of his legacy, finally gave the project the green light.

The archives to which Garbus now had access proved to be a treasure trove of material — some of it familiar from Cousteau’s films and television specials, but most of it had never before been seen by the public. Childhood photos, wedding pictures, early footage of film of Cousteau learning how to dive – they were all at the director’s disposal. More importantly, it provided Garbus the opportunity to create a celebrity-oriented documentary that didn’t have to rely on familiar footage and an endless parade to talking heads, and that alone helps to make “Becoming Cousteau” stand apart from the pack.

“Becoming Cousteau” serves as a wide-ranging introduction to (or valuable reminder of) the many significant accomplishments achieved by Cousteau in his lifetime. Yes, he was undoubtedly the premier explorer of his generation and likely the most famous oceanographer of all time. But the film reveals that he was much more than that. For instance, Cousteau was an inventor — in the 1940s, he co-invented the Aqua-Lung, the self-contained underwater breathing apparatus (SCUBA) that gave birth to the diving technology that is being used to this day.

He was also a filmmaker, creating dozens of shorts capturing underwater life and even directed two feature films himself. The first, 1956’s “The Silent World,” became an international sensation, winning the Palme d’Or at the Cannes Film Festival and going on to capture the Academy Award. His second, 1964’s “World Without Sun,” won the Oscar as well, making Cousteau one of the few filmmakers in history who has gone 2-for-2 with the Academy.

The Cousteau Society may have provided Garbus access to the archives, but the filmmaker wisely retained total editorial control. As a result, “Becoming Cousteau” isn’t quite the valentine to its subject as you’ve come to expect from celebrity bios but is instead a fuller portrait, warts and all. Despite the public image of the happy explorer, Cousteau in real life was a much more complicated individual, a side of him that Garbus captures in detail.

For example, in the early days of the Calypso, Cousteau found the expedition running short of funds, so he agreed to get in bed with the oil companies, using his divers to locate potential oil reserves and destroying portions of the Persian Gulf in the process. No better at times were key portions of his personal life. He was an unfaithful husband (Cousteau fathered two children with Francine while he was still married to his first wife, Simone) and a lousy parent (he was devoted to one son, Philippe, who most emulated him and virtually ignored the other, Jean-Michel).

Despite his flaws, however, no one can doubt Cousteau’s devotion to protecting the environment, a cause to which he devoted the final decades of his life. After witnessing first-hand the damage that humanity had inflicted on the many places where Cousteau used to dive and photograph, in 1973, he founded the Cousteau Society, which remains dedicated to saving and protecting marine life around the world. Cousteau traveled the globe on behalf of the society and, in his later years, became a fierce advocate in warning about climate change. He was not shy about seeing that advocacy as a sort of redemption for his earlier acts, and it is that redemptive arc that Garbus utilizes in constructing the narrative of “Becoming Cousteau.”

As a two-time Oscar nominee (“The Farm: Angola, USA” & “What Happened, Miss Simone?”), Garbus knows her way around shaping a documentary. While there are some less-consequential portions of Cousteau’s life (particularly in his later years) that she has chosen to include, the resulting film as a whole skillfully captures a remarkable life very well-lived. If the Cousteau Society had any worries about its founder’s legacy, anyone who sees “Becoming Cousteau” will likely never forget the man, his accomplishments, and the impact his work will still have on generations to come.