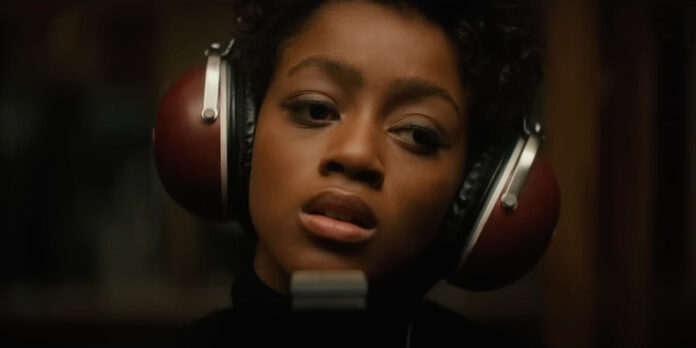 THE STORY – Beauty (Gracie Marie Bradley) is a young and gifted singer on the brink of a huge breakout. Under the strict supervision of her parents, she has been preparing for this moment her whole life. She is supported by her devoted girlfriend, Jasmine (Aleyse Shannon), despite her devout parents’ disapproval of their relationship. Soon after signing her first contract with an industry pro (Sharon Stone), she is met with the harsh realities of pop stardom–especially for a queer Black woman in the 1980’s–when she is asked to compromise her identity, hide who she loves, and misrepresent her art for the promise of fame and success.

​The movie industry is obsessed with stars. Not just its own stars, but music stars, too. Playing a famous musician in a biopic is an almost surefire way to get an Oscar nomination, and films about fictional singers come around regularly every few years (“Teen Spirit,” “Popstar,” John Carney’s entire filmography, etc.). But even with so many films tackling this subject matter, Andrew Dosunmu’s “Beauty” stands out.

Unconventionally told through striking use of montage, “Beauty” is an impressionistic look at the very early stages of a young pop star’s career – the period from just before young Beauty (Gracie Marie Bradley) signs her big recording contract through the night of her first big televised performance, in the late ’70s-early ’80s. Beauty’s mother (Niecy Nash) was a recording artist back in the day and is now so fiercely protective of Beauty that she works her to the bone and berates her so that she can say that her daughter “isn’t ready.” Her father (Giancarlo Esposito) is a tyrant who is more concerned with the money his daughter could make for him than any aspect of her well-being. Her brothers (Kyle Bary and Micheal Ward) are caught in a battle of wills with their father to see which of them is more of a man. For her part, Beauty just cares about two things: Singing and her girlfriend Jasmine (Aleyse Shannon). As she works more and more with music executive Sharon Stone, we see how the music industry commodifies black women’s voices to sell product to the most people possible, bleaching them dry of any trace of who they are as a person so as not to offend the audience with the largest market share.

It’s a pretty ambitious mission statement, and Dosunmu has come up with some striking ways of putting it across. The most notable stylistic flourish is that, while we see her in the recording studio and singing as part of her church choir, we never actually hear Beauty sing. From the right vantage point, this is a potent cinematic trick, as the film is literally robbing her of her voice or commenting on how it doesn’t really matter what she sings or how she sings it, as long as she is packaged properly as an artist. The singing we hear is that of the gospel, soul, and R&B singers Beauty watches on TV in performances ranging from Mahalia Jackson’s stirring gospel songs to Patti LaBelle’s melismatic cover of “Over the Rainbow.” These are artists who managed to stay true to themselves and their upbringing while achieving varying levels of fame, showing that a good balance between art and commerce is possible.

The issue with this is that Lena Waithe’s screenplay is perhaps too focused on this idea, rendering Beauty as a cipher with no personality of her own (outside of the vague connections the film makes between her and Whitney Houston). While she certainly lives up to the character’s name, the undeniably beautiful Bradley cannot give Beauty any trace of inner life. She’s not unlikeable, but it’s difficult to feel any connection to her because the film’s conceit undermines that connection at every turn. Beauty is meant as a stand-in for any number of female musicians, to be representative of a whole class of people whose personalities were washed away by the industry. Though her story is affecting, it’s hard to root for someone who is such a blank slate, a character that is so obviously meant to be a symbol.

Her story is also, as presented, not complete. Ending as the curtain goes up on her first major public appearance after she drunkenly flirts with a male neighbor she invited to watch as Jasmine helplessly looks on is a powerful idea in theory. In execution, though, it feels like the movie ends just before we get to the good stuff, when we see Beauty on the national stage and how she copes with all the conflicting forces competing for her soul. And this, sadly, is the film’s ultimate problem: Everything about its thematic underpinnings works in theory but comes across poorly in execution.

Even with crafts this beautiful – Benoît Delhomme’s cinematography is full of striking lighting and beautiful compositions, Oriana Soddu’s kaleidoscopic editing impressionistically connects moments in Beauty’s life by looping back and forth, and the costumes and production design keep everything grounded in a very specific time and place – watching “Beauty” feels like an intellectual exercise as opposed to a cinematic experience. Thanks to the unconventional style, it is often a very involving intellectual exercise. Still, Dosunmu and Waithe have focused too much on engaging the head and too little on engaging the heart.