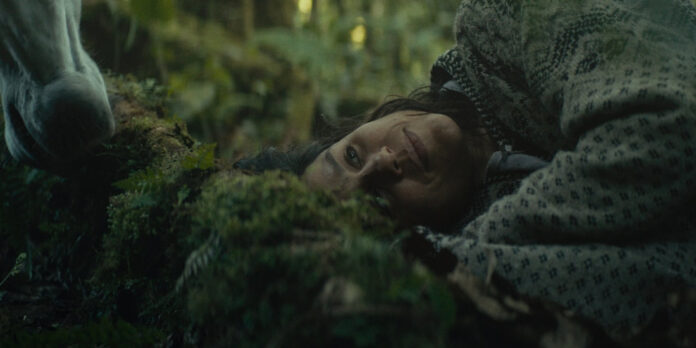 THE STORY – In a remote village in Costa Rica, Clara, a 36-year-old woman, takes off on a journey to break free from social and religious conventions and become the master of her sexuality and newfound powers.

​An introspective character study is a work that can be quite an illuminating showcase. The still waters are an opportunity to quietly look into the world of an individual and peel back the layers that shroud their emotional state. What is lacking in histrionics can be a fascinating examination into an intriguing psyche. One can find such objectives at the center of “Clara Sola” and its meditative dive into the world of a person whose crushing loneliness drives such vivid commentary. The final results can sometimes struggle to be thoroughly engaging, but the portrait painted is compelling all the same.

Set in a small village in rural Costa Rica, Clara (Wendy Chinchilla Araya) lives a secluded life with her mother and niece. Clara has been afflicted with health problems her whole life, but this has also contributed to her family and community believing she has been gifted with divine healing powers. This exploitation has been at the cost of Clara’s personal freedom, and she yearns for liberation from such a stifling environment. Her mood changes with the arrival of Santiago (Daniel Castañeda Rincón), a farmhand who helps with the horses and awakens the simmering emotions that have been buried underneath. Now restless and rebellious, Clara begins her journey toward self-actualization and breaks free from the chains of bondage that have consumed her for too long.

Nathalie Álvarez Mesén’s directorial eye is just as reserved as the film’s protagonist. She crafts an intimate perspective that hones in directly on inhabiting the viewpoint of the characters. The imagery is simple yet incredibly striking in its ability to maintain a muted sense of awe. The filmmaking is not flamboyant, but it successfully assembles this setting that can draw one into the plights at hand. This aura isn’t always sustained, as tedium can set in with such restraint, leading to an inconsistent momentum in its pacing. In these moments, the film can struggle to maintain engrossment, which lessens the overall impact. At the same time, Mesén’s efforts do well to present a subtle yet intense piece that plunges further into such dark territory. The isolation enforces the foreboding dread that lingers in every frame, and the score also compliments this spirit rather well.

The screenplay by Mesén and Maria Camila Arias is one that admittedly feels light on concrete narrative. The overall story is a simple one whose explored territory doesn’t present many nuances on the surface. Combined with the pacing, this endangers the storytelling into becoming meandering and lacking. However, there is a rich thematic tapestry being weaved which is quite captivating. The central thesis is a look into this woman’s oppression, particularly through the lens of religion and the empowering force that pushes her toward realizing the power she has within. It’s fascinating how there is also ambiguity as to whether or not Clara actually possesses the abilities others claim she has, which only makes the spiritual connection to the surrounding natural forces even more of a poignant metaphor. The writing may be more of an achievement in theme than plot, but it’s an effective foundation.

Araya’s central performance anchors much of the film, and it’s an astounding display of internalized pain fighting for emancipation. There is a constant sense of lurking complexity with every gaze she casts, and she only ever indulges in outbursts of rage when appropriately cathartic. This film revolves around her conflict, and Araya is essential to realizing this riveting persona. She also shares an endearing chemistry with Rincón, he himself also having an inviting screen presence but also not making the most definite of impressions. This could describe most of the supporting players, even though there is also a fine turn from Ana Julia Porras Espinoza as Clara’s niece Maria. The two share a contested bond that both performers engage in an alluring manner. However, Araya is the only one who truly stands out, and her portrayal completely justifies this.

One may have the impression that what primarily works about “Clara Sola” is a commanding lead performance that ends up carrying much that surrounds them. In truth, the greatest asset the film possesses is Araya’s committed turn. Yet, the craft on display is still noteworthy and helps to inform this drama. The direction may not always be completely extraordinary, but it serves the tone remarkably well in creating a profound space that plunges into this environment. The tale itself may be simple but deceptively so with layers of intrigue. This may seem like yet another subdued character study, but it still has much to offer in its exploration.