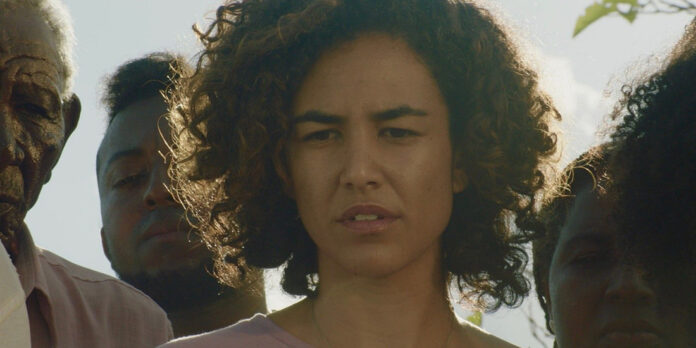 THE STORY – Teresa comes home to her matriarchal village in a near-future Brazil to find that its citizens have been sold as prey to bloodthirsty foreign hunters.

There are some films which take you on one hell of a ride, and “Bacurau” (from directing duo Juliano Dornelles and Kleber Mendonça Filho who were behind 2016’s “Aquarius”) is certainly one of these films. When the film premiered at this year’s Cannes Film Festival, it was awarded the Cannes Jury Prize, and the film garnered a lot of critical praise. With this in mind, it would be safe to say that going into the film I had rather high expectations. The film has a reputation for being an ultra-violent, bloody masterpiece, and an updating of the Spaghetti Western film. It certainly lives up to its reputation, and is quite unlike any other film you will encounter this year- delightfully bloody, gory and gruesome but it is also a satire with an underlying socio-political and economical message at its core.

The film is set in the near future. An exact time isn’t specified but the technology shown in the film helps to reinforce the film’s futuristic setting. We start in space slowly zooming into the Earth and the country of Brazil, passing the satellites that orbit our planet. We then cut to a young woman called Teresa (Bárbara Colen), who is traveling back to her home town of Bacurau, located in the Brazilian Sertão (the Brazilian outback). The reason for Teresa’s return is that her grandmother has recently passed away. The village has changed in recent years and has seen better days, there is a lack of water, medical and food supplies are low and the mobile phone signal is non-existent.

Bacurau is made up of an eccentric bunch of characters, there’s Pacote (Thomas Aquino) a hitman who has a past with Teresa, the sharp-tongued Doctor Domingas (Sônia Braga), and the larger than life gangster Lunga (Silvero Pereira) among others. The townsfolk clash with a local politician called Tony Jr (Thardelly Lima), a sleazeball who is trying to win over the people by bringing them a truckload of books for the school (which he just dumps out onto the ground), expired tins of food, and dodgy medicine which Domingas advises the people not to take as it will make them addicted.

One day the water truck (that brings the town their water supply) arrives riddled with bullet holes, and then two mysterious dirt bike riders appear bringing with them trouble. It quickly becomes apparent that the corrupt government has turned their backs on Bacurau as the town is no longer being picked up on GPS, essentially it has been written off the map.

Soon, the town becomes under attack from a bunch of gun-wielding tourists led by the eccentric German Michael (played by a superb Udo Kier who gives Thanos a run for his money in terms of being this year’s best villain). These ‘tourists’ take delight in killing innocent people in a “Death Race 2000” style game where they compete to be the top of the leaderboard. If Bacurau and its people are to survive then they are going to need to fight back and things are going to get very, very bloody.

“Bacurau” is a bonkers film, it’s confusing to follow at times as there are often quite surreal and trippy scenes that leave the viewer feel as if they are experiencing a fever dream. However, this is the beauty of the film, as it’s unpredictable and so unlike anything else that has been depicted on the big screen this year. The film is an homage to the films of Sergio Leone and Sam Peckinpah in terms of its unflinching violent action sequences and style. It is also an homage to films such as John Carpenter’s “Assault on Precinct 13” (1976) and even “The Magnificent Seven” (1960) in terms of its narrative of a small bunch of people defending their territory from an outside force. It is because of the filmmakers’ obvious love and appreciation to the 1960s and 70s genre cinema that the film has this timeless quality to it. The film may apparently be set in the distant future, but it could also quite easily be set in the days of the frontier past, with the tourists being the new World settlers forcing their customs and way of life onto the indigenous people of this land.

The camera is almost its own character, with cinematographer Pedro Sotero using wide shots to capture the remote location, the camera looking down on the town as if we were a spectator and the use of tracking shots to follow the main characters, feels as if we are a predator stalking its prey which helps to mirror the game that the tourists are participating in. The camerawork is very fluid and the camera appears always to be on the move. At certain points, the camerawork feels very disorientating especially when coupled with the bloody, gory special effects and on-screen violence it makes for a very unsettling experience which some viewers may find too hard to digest. Those who have a weak stomach may wish to pass on “Bacurau” but even die-hard gore veterans should prepare themselves in advance for the levels of violence and gore depicted on-screen.

Even when the film feels like it’s dragging (its runtime is over two hours), we still remain invested because of the film’s extraordinary characters. Yes, it may be hard to keep track of who is who and how they relate to the other characters, but each character feels very developed and fleshed out. There’s a strong sense of community, and the concept of supporting one another during a time of need, something that in our modern age we have seem to have forgotten. The town of Bacurau is made up of misfits and outcasts who have been forgotten and are misunderstood by the rest of society, and by being a part of this town, these people find a sense of belonging. And, while on the surface “Bacurau” appears to be nothing more than an exploitation flick, it’s actually a film with many layers and depicts the power of community, empathy, and humanity.

Overall, “Bacurau” is a modern neo-Western but it’s so much more than just a bloody homage to the “Dollars” trilogy, this is a film full of heart and soul. It’s hard not to be swept away by the film’s scope and scale, and be in awe by the sheer boldness of the directors’ vision. This review has been deliberately vague on certain plot points as it is best to go into “Bacurau” as blind as possible, so you can experience this world firsthand. Simply put, “Bacurau” is a psychedelic trip of a film and one that must be seen to be believed.