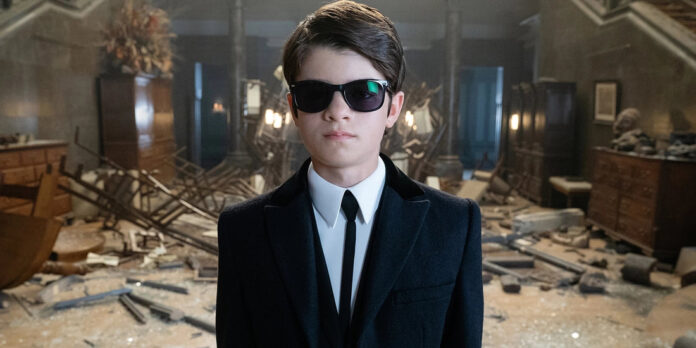 THE STORY – Artemis Fowl is a 12-year-old genius and descendant of a long line of criminal masterminds. He soon finds himself in an epic battle against a race of powerful underground fairies who may be behind his father’s disappearance.

​​When a young adult series is adapted to the screen, you can only hope that it skews more towards the beloved “Harry Potter” movies than the much scorned “Percy Jackson & the Lightning Thief” film. Unfortunately, “Artemis Fowl” joins “The Lightning Thief” and “The Golden Compass” in the camp of YA series done dirty by their film adaptations. Kenneth Branagh’s latest film is bland and uninspired despite its interesting source material.

The titular character of Artemis Fowl (Ferdia Shaw) is a young Irish boy and criminal mastermind (though we never see much proof of that). He must rescue his father (Colin Farrell), an antique dealer who has been stolen by magical creatures and is suspected of the theft of priceless artifacts like the Rosetta Stone and the Book of Kells in the human world. The movie is narrated by Mulch (Josh Gad), an overgrown dwarf who has been taken in for questioning about his involvement in the crimes by the human police.

The story is loosely based on the 2001 novel by Eoin Colfer, the first of eight books in a series that came to its close in 2012. A film version has been in the making since 2001 and Disney acquired the rights in 2013. It feels rather past its time for this film to be made as the popularity of the series has waned, but hopefully, one good thing to come from it might be more children reading the novels.

Conor McPherson and Hamish McColl’s screenplay is at the heart of the film’s issues. It’s the type of screenplay that feels the need to layout every relationship rather than showing us anything. (Also, it has a 12-year-old kid say the line, “I’m not a kid anymore, Dad.” We need to retire that phrase from movies.) Despite this, it does a poor job of world-building and explaining the many plot points that are unfolding. It’s also wildly different from the plot of the novel, with much less of an emphasis on Artemis being a “criminal mastermind” and development of the theme of good versus evil. We spend a lot of time with Artemis Fowl Sr., though he doesn’t ever tell us much about what’s going on.

One of the movie’s fatal flaws is that it doesn’t provide much character development. Mulch tells the men interrogating him, “Don’t underestimate the kid,” but we are never given any sort of insight into Artemis’s intellect other than him having a “plan” that’s essentially just letting events unfold. This is Shaw’s first film, so perhaps it’s not surprising that he seems stiff and lacks charisma. Neither Farrell nor Nonso Anozie as the Fowl family’s butler are given any chance to develop their characters or their relationships with Artemis.

The film is at its best when it’s underground in the magical realm. This world is at least fun to look at, with its impressive array of magical creatures. Holly Short, an elven officer, is the most compelling character in the film and Lara McDonnell is the best of the two main child actors. Judi Dench plays Commander Root, a change from the novel in which the character is male. She has pointy ears, a bright green costume, and a growl in her voice; it’s very clear between this and last year’s “Cats” that Dench does whatever she wants to.

Gad’s Mulch seems to take over the movie more than he’s meant to, partially because he’s the only one giving a performance that feels big enough for this sort of fantasy film. There’s a few gross moments of CGI in which his character eats dirt, but overall, his performance is fairly engaging even if he does look like an under-grown Hagrid. The film might have been better had it delved more into the political maneuverings of the magical Haven City – which are often alluded to but never fully explained. There’s also a villain that we see shrouded in darkness many times, but never learn anything about which is a waste.

“Artemis Fowl” certainly does its best to set up a sequel, but hopefully one is never made. This is the first Disney film to have its release moved to Disney+ because of the ongoing quarantine, but it feels like the proper home for it regardless of the situation. It’s not the worst children’s movie ever made (and at least it’s only 95 minutes long), but it’s also not likely to please any fans of the books or win over many adults. If you’re a fan of Branagh’s direction, you’d be much better off waiting for his next film, “Death on the Nile.”

Powered by JustWatch
Share
Facebook
Twitter
Copy URL
Previous article
The Next Best Picture Podcast: Episode 198 – Oscars Going Back To 10 Best Picture Nominees & The “You Should Have Left” Trailer
Next article
“7500”