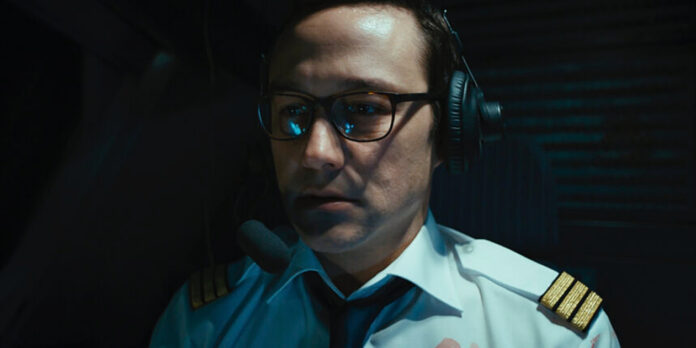 ​Over the years, there have been many airplane-based disaster films, from the likes of Paul Greengrass’s “United 93” to Robert Zemeckis’ “Flight” and Clint Eastwood’s “Sully”. There’s something unnerving about flying that many of us can probably agree on, perhaps it’s the idea of being miles up in the sky and having your life in someone else’s hands. Since 9/11, how we travel by air has changed dramatically, adding another layer of fear and anxiety. Patrick Vollrath’s latest film, “7500,” is a nice addition to the post-9/11 airplane disaster sub-genre (if such a sub-genre exists), and for 90 minutes we endure an experience like no other. A word of warning to those who are nervous about flying, you will probably want to give this one a miss.

“7500” follows junior co-pilot Tobias Ellis (Joseph Gordon-Levitt) whose simple routine Berlin-to-Paris flight is violently disrupted by Islamist hijackers, lead by Kenan (Murathan Muslu) with reluctant terrorist Vedat (Omid Memar) along for the ride. The stakes are high for Tobias, not only is the plane’s main captain Michael (Carlo Kitzlinger) injured in the struggle when the hijackers try to storm into the cockpit, but Tobias’s German-Turkish girlfriend Gökçe (Aylin Tezel) happens to be a stewardess on the same flight. Essentially cut off from the rest of the plane and the passengers and crew onboard, Tobias can only see the world beyond the cockpit through a security camera and has to watch on in horror as the hijackers begin to threaten the lives of the hostages in order to get him to open the door.

Gordon-Levitt’s performance during these standoffs is enthralling to watch as he wrestles with his emotions and the moral dilemma the character is facing. We are left wondering what we would do if we were in the same situation, especially if the life of our loved one was being threatened. The film is at its strongest and most effective in its first and second acts as Tobias faces one challenging moral dilemma after another. Even though we’ve seen Gordon-Levitt in other dramas such as “Snowden” and “The Walk,” with “7500,” he’s been given the opportunity to act in some really emotional and dramatic scenes, proving that he’s more than capable of leading an entire drama on his own.

While the film’s plot may seem to be treading all too familiar ground (the script is co-written by Vollrath and Senad Halilbasic), what makes “7500” somewhat unique is the fact that the entirety of the film takes place in the cockpit, making for a truly claustrophobic thrill ride. We never venture outside of the plane, aside from when the film opens with CCTV footage of the Berlin airport, and the film plays out in seemingly real-time.

Of course, there have been other films that have played out in real-time and in one-setting to great effect: Gustav Möller’s “The Guilty,” Rodrigo Cortés’s “Buried,” and Joel Schumacher’s “Phone Booth”. In these “race against time” films, it’s time that is the real enemy. Time, or rather the lack thereof, hangs over “7500,” and whenever a countdown begins, we are left holding our breath in sheer fear. The film’s final act is slightly anti-climatic, with the film peeking far too early, and the ending feels far too formulaic and predictable.

There will be obvious comparisons being made with Greengrass’s “United 93,” but while Greengrass’s film is based on an actual true-life account, Vollrath’s is based purely on a hypothetical “what if”. Sadly, “7500” doesn’t have the same impact that “United 93” has. There’s something missing here. Perhaps it’s down to the fact that we don’t see a world outside the cockpit. The backgrounds for the main characters are presented to us via exposition rather than showing us their lives/routines beforehand, so ultimately it becomes harder for us to connect with them.

While there are some issues with “7500” – narrative and lack of character development – this is a fairly strong debut from its director. The film is well shot by cinematographer Sebastian Thaler whose tight camera angles and close-ups place the audience on edge. And, along with editor Hansjörg Weißbrich, Thaler’s camerawork manages to create a steady build-up of anxiety. Gordon-Levitt manages to hold the film together through its shakier parts, and his interactions with Memar are also worth mentioning. However, it’s a shame that we never really get to know more about Memar’s character or any of the other hijackers. It’s this lack of an obvious motive from the hijackers which feels just a little too uncomfortable.

Overall, there are some issues with “7500” which seem to hinder one’s enjoyment and impact of the film. While watching it, you are caught up in the sheer adrenaline of it all, but after you’ve landed back on safe ground, and you’ve had time to reflect on the film as a whole, there are just a few aspects of the film that don’t seem to sit right. “7500” doesn’t exactly soar, but it’s a satisfying ride if you can stomach some slight turbulence.