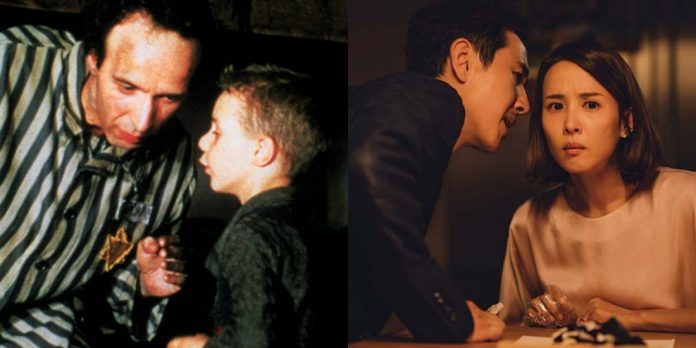 By Amanda Spears
​
The industry has now had their opportunity to chime in on this year’s Oscar race and it comes down to two films: “1917” and “Parasite.” The former is a World War One drama that’s a technical masterpiece appearing to be one continuous shot, and the latter from South Korea is the tale of the class division of two families. “Parasite” has been a contender since the Cannes Film Festival, and while it would appear that “1917” has the edge, we might want to look back at the 1998 Oscar race for clarity.

“1917” has competed impressively, winning at the Golden Globes, PGA, DGA and at the BAFTAs. The film’s director, Sam Mendes, is the heavy favorite to win his second Best Director prize. “Parasite,” not to be outdone, has also picked up a Golden Globe and a BAFTA award for Best Foreign Language Film. Its maestro, Bong Joon-ho, is expected to make history for South Korea with an Oscar win for Best International Feature. “Parasite” also picked up some other impressive wins: Best Editing at the ACE Awards, Best Original Screenplay at the WGA Awards and BAFTAs, and the coup de grâce SAG Award for Outstanding Performance by a Cast. It’s the latter that will give “Parasite” the edge over “1917.”

Can a foreign-language film actually win Best Picture? Many pundits and prognosticators believed that Mexico’s “Roma” would make history last year as the first film to do so. However, what ultimately could have been the preventive factor for “Roma” was its lack of support by the acting branch, as it was completely overlooked at the SAG Awards. “Parasite” on the other hand, made history as the first foreign-language film to win SAG’s top prize. Arguably, the last foreign-language film to have had a legitimate chance of winning Best Picture was Italy’s “Life is Beautiful.” The film received two SAG Award nominations: Outstanding Performance by a Cast and the film’s director, writer and star Roberto Benigni won Best Male Actor in a Leading Role. “Life is Beautiful” ultimately lost the former to the eventual Oscar Best Picture winner, “Shakespeare in Love.”

The similarities between this year’s Oscar race and that of 1998 don’t end with the comparison of two foreign-language films. The race would come down to Steven Spielberg’s “Saving Private Ryan” and John Madden’s “Shakespeare in Love.” “Saving Private Ryan,” a World War Two drama, was a revolutionary film for its time, with the retelling of the Normandy invasion. The film would win at both the PGA and DGA, while “Shakespeare in Love” took home the SAG Award for Outstanding Performance by a Cast and Female Actor in a Leading Role for Gwyneth Paltrow. It was the largest branch of the Academy that ultimately tipped the scale in favor of “Shakespeare in Love” for Best Picture.

It’s important to keep in mind that since the SAG Awards first started handing out a statue for Cast in 1995, only “Braveheart” has been able to win the Oscar for Best Picture while being completely snubbed at SAG. The last two Best Picture winners, “The Shape of Water” and “Green Book,” may have been shut out of the Cast category, but both films received two SAG Award nominations proving they had support amongst the actors.

The 1998 Oscar race wasn’t a preferential ballot and only a battle between five films. This year’s Oscar race will demonstrate the importance of the SAG Awards with its champion “Parasite” proving victorious – if the preferential ballot doesn’t get in the way. In one way or another, this year’s race will be one we’ll continue to look to when making future predictions.

Are you predicting “Parasite“ to become the first foreign language ever to win Best Picture this Sunday? Let us know in the comments section below or on our Twitter account.