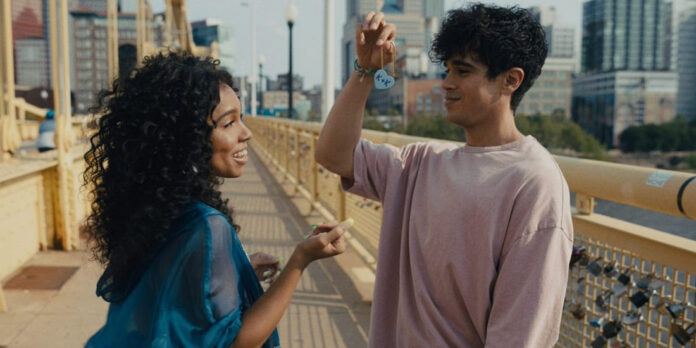 THE STORY – A high school student summons up the courage to ask a transsexual teen out on a date.

​​​​​Sometimes it seems like every possible variation on the high school rom-com film has already been done. But Emmy Award-winning actor Billy Porter’s directorial debut “Anything’s Possible” proves that there are plenty of stories left to tell if filmmakers are willing to veer away from the usual subjects. Written by Ximena García Lecuona, the film depicts a Black trans girl in Pittsburgh experiencing her first relationship. The resulting film is a sweet and modest effort from Porter, revealing he has more talents to offer the entertainment world and society.

Kelsa (Eva Reign) is at the start of her senior year and is determined to make this the year she genuinely thrives, not just survives. She has a passion for animals and their unique names, along with the YouTube videos she makes about her experience of being trans. She’s looking forward to attending college in New York or Los Angeles, where she can start fresh. Meanwhile, Kelsa’s supportive single mother, Selene (Renée Elise Goldsberry), struggles to balance protecting her daughter and giving her room to fly. However, we’re reminded that not all parents are keen to see their children follow their dreams as Khal (Abubakr Ali) would rather attend a trade school, but his parents are set on him studying economics at a four-year college. He’s creative and excels in art class, but he also loves responding to the posts on the relationship category of Reddit. As a Muslim with a full name that’s hard for his peers to pronounce, he knows what it’s like not to fit in. Khal values his best friend Otis (Grant Reynolds), who he’s known since they were children, but is troubled by his tendency to use phrases like, “That’s so gay.” He’s apprehensive about his reaction if he were to act on his crush for Kelsa. But even though Kelsa’s friend Em (Courtnee Carter) is also interested in him, with some encouragement from his younger brother Arwin (Naveen Paddock), he presents Kelsa with flowers. Em is upset, the whole school is riveted to the drama, and Otis wants to know if this means that Khal is gay. But what blossoms is a sweet and soft romance between the two that feels very natural for two fairly-innocent high schoolers.

Neither Em nor Otis readily accepts their friends’ relationship, and both cause issues that highlight trans teens’ difficulties. From being misgendered to being barred from using the women’s locker room, Kelsa encounters numerous challenges. But the film is mainly focused not on these but on telling a radically joyful story of a girl learning to accept love. Screenwriter Lecuona is a nonbinary trans woman herself, which may explain the sensitivity with which the topic is treated. While many of the stories of trans people on film center on their struggles and the hatred that they face, “Anything’s Possible” is honest about the discrimination that Kelsa faces without making it her entire life. Never once does the film show her pre-transition or reveal her dead name. Instead, it treats her identity as a girl as an accepted fact and is more concerned with her life as a girl than with her transition.

Reign brings an intelligence and spunkiness to her first starring role that endears Kelsa to the audience while also providing a real sense of emotional gravity. Simultaneously, Goldsberry excels in her role, making Selene believably encouraging while also showing where Kelsa learned her strength. The relationship between the two sparkles; it’s the mother-daughter relationship that many teens can only dream of, whether they’re trans or CIS. Lecuona’s screenplay also provides a well-balanced character for Abubakr Ali to play, as it’s refreshing to see a male protagonist in a film that doesn’t fit into the typical box of jock or nerd.

The film does a good job of acknowledging social media’s role in teens’ lives without feeling too cheesy, from Kelsa posting her YouTube videos to looking for Khal’s astrology sign in Instagram memes. Porter weaves the presentation of the technology skillfully, with texts showing on the screen and videos of Reddit users appearing to read their comments aloud. It’s one of the more creative touches in a movie that doesn’t have much innovation in its filmmaking. One area where Porter overdoes it is with the costuming. They are flashy to the point of being distracting and unrealistic, as many characters seem dressed for a music video, not a class.

Like every high school film, “Anything’s Possible” can’t help from having the prerequisite subplots about college applications and arguing with parents over post-high school plans. In many ways, the film seems like any other teen rom-com with its workman-like filmmaking and genre conventions despite the unique perspective and sensitivity of the writing. While it might not push any boundaries in its filmmaking, “Anything’s Possible” represents a step forward in diverse storytelling. Reign’s wonderful lead performance keeps the audience engaged throughout, and Porter’s love for his hometown of Pittsburgh is palpable. We can only hope that Porter and others like him continue to expand the representation we see in films of all types.