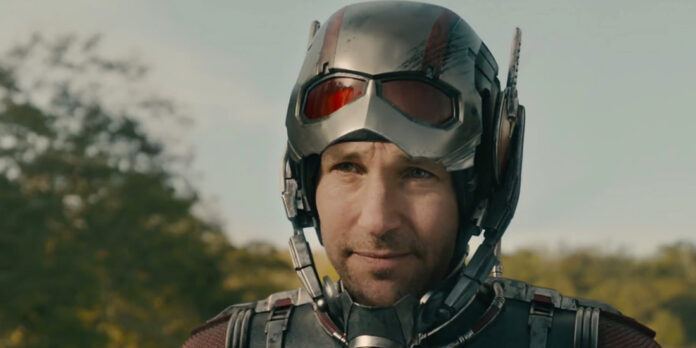 THE STORY – Forced out of his own company by former protégé Darren Cross, Dr. Hank Pym (Michael Douglas) recruits the talents of Scott Lang (Paul Rudd), a master thief just released from prison. Lang becomes Ant-Man, trained by Pym and armed with a suit that allows him to shrink in size, possess superhuman strength and control an army of ants. The miniature hero must use his new skills to prevent Cross, also known as Yellowjacket, from perfecting the same technology and using it as a weapon for evil.
​
THE CAST – Paul Rudd, Evangeline Lilly, Corey Stoll, Bobby Cannavale, Michael Peña, Tip “T.I.” Harris, Anthony Mackie, Wood Harris, Judy Greer, David Dastmalchian & Michael Douglas

​Small in size but large in entertainment, “Ant-Man” is an enjoyable Marvel film that sadly doesn’t break the mold of the traditional Marvel formula despite the talent involved. While more recent Marvel films have been striving for something greater in scope and ambition, “Ant-Man” falls under the category of just another entry in the Marvel Cinematic Universe. Proving to be one of the more comedic entries, “Ant-Man” is still thoroughly enjoyable through its humor, the outstanding special effects, and the enjoyable ensemble. All in all, “Ant-Man” does not necessarily break any new ground but is still a rather delightful viewing experience.

Ant-Man is Scott Lang (Paul Rudd), a cat burglar with a lifetime of criminal wrongdoings and misdemeanors. While he has lived his life in and out of prison, he is given another chance at life, another chance to do things right through Dr. Hank Pym (Michael Douglas). Dr. Pym introduces Lang to a suit that can shrink Lang in size but increase his strength exponentially, like an ant. Taking on these new responsibilities, Lang must then assist Dr. Pym in the heist of a lifetime which will ultimately save the world as we know it.

If this sounds like a typical Marvel set up, well that’s because it is. The fate of the world hangs in the balance and an unlikely hero is meant to restore that balance. One of the biggest issues with “Ant-Man” is that it’s just another simple Marvel concoction. It does not attempt anything new, other than its special effects, and it does not try to further expand the cinematic universe that had been built up to this point. “Ant-Man” focuses simply on the excellent ensemble and the chemistry they have together and the amount of great comedic material was able to arise from that ensemble.

Another disappointing factor to this film is what almost occurred. When the film was announced, Edgar Wright (“Shaun Of The Dead” & “Scott Pilgrim Vs. The World”) was originally attached to direct the film. Once you see the action sequences within this project it is pretty clear that Wright would’ve been an excellent choice for this job. The action moves rather quickly and is meant to be exhilarating much like Wright’s visual style. Sadly due to creative differences, Wright exited the project and director Peyton Reed stepped in. Reed still directs the film with precision and care but it is just a tad disheartening to know that we almost received an Edgar Wright Marvel film.

But that does not mean we should focus heavily on what “Ant-Man” is not. The best aspect of “Ant-Man” by far is the visual effects. I do not think it is too far-fetched to say that this deserved a Best Visual Effects nomination at the very least in 2015. The fluidity of the shrinking between characters and how they engage in fights when both small, normal size, or even giant sized, is outstanding and exhilarating to watch. At first, you think the gimmick would get old pretty fast but every time it happens, it’s exciting and helps to make “Ant-Man” stand out on a visual level.

“Ant-Man” is not the best Marvel film by any means but it is still enjoyable if a bit inconsequential. The comedic lines of dialogue that flows between the actors is crisp and gives a light-hearted element to the overall film. The action sequences and the visual effects that come with said sequences are fun and certainly contain surprising elements to keep us invested. However, the film does suffer from the typical Marvel formula of storytelling which after so many films, we are s=very accustomed to by now, making it both predictable and a tad disappointing. Fantasizing about what Edgar Wright would’ve done with the project makes the overall product a little upsetting as well, but it isn’t enough to ruin your overall enjoyment. While everything in the film is small in scale, it still has big laughs and big action making it a respectable sized amount of fun.