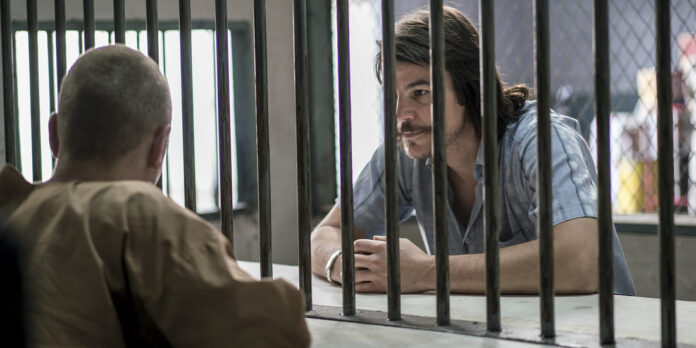 ​​​​There’s something to be said about a seemingly disparate storyline that finally comes together in the end. It’s usually satisfying to see the tangled web of a plot finally become unknotted and reveal that everything was working towards a satisfying conclusion. Unfortunately, “Most Wanted,” the new film from writer-director Daniel Roby, is unable to achieve this type of pleasing finale despite the way it seems to build up to such a moment with its multiple and non-synchronous narratives.

The parallel storylines in question mainly focus on Daniel Léger (Antoine Olivier Pilon), a young man with a history of drug use, and Victor Malarek (Josh Hartnett), an investigative journalist hoping to uncover the truth behind Léger’s suspicious imprisonment in Thailand. We see the gradual lead-up to Léger’s arrest and sentencing while at the same time watching Malarek’s noble attempts that occur after Léger’s detainment. “Most Wanted” is based on the arrest of Canadian Alain Olivier, who spent eight years in prison in Thailand. Renamed for the film, it offers a sympathetic portrait of Olivier’s counterpart while also not hiding his questionable decisions. Malarek is portrayed as a reporter on the verge of losing his job who will go to any length and use any contact to uncover the truth and turn it into a good story.

This narrative structure strives to portray the deceptions and double-crosses that Léger was subject to while also showing the audience, in Malarek’s storyline, what happened after the set-up against Léger was executed. It’s not immediately clear that the timelines aren’t occurring simultaneously, which admittedly leads to some moments of confusion early on in the film. And as the narrative goes on, this structure doesn’t quite uncover or reveal anything that wouldn’t have been served equally well by having the timelines synced up. It’s a bold choice on the screenplay’s part, but one that doesn’t ultimately lead to any particularly captivating moments on its own. The film also shockingly ends abruptly and unceremoniously, without really letting this narrative structure pay off in any way.

Although the script may be disappointing, the performances are worth watching. Hartnett is sturdy and assured as the harried reporter. Jim Gaffigan takes some big swings as a boisterous and dangerous man who makes early contact with Léger. And while it’s sometimes a bit much, his performance is ultimately a decent dramatic turn for the comedian. The stand-out of the cast is Pilon as the falsely imprisoned Léger. He plays a young man who makes many bad choices early on in the film, and his natural integrity and charisma help keep the audience on his side throughout the entirety of the story. Once he gets to the Thai prison, he plays both menacing and scared with equal believability. It’s a great role that gives him a lot to work with, and he fully delivers.

Ultimately, “Most Wanted” is an inherently interesting true story that’s told in a way that saps it of some of its excitement. Pilon turns in a captivating lead performance, but the bold narrative structure doesn’t quite live up to what it’s trying to do.