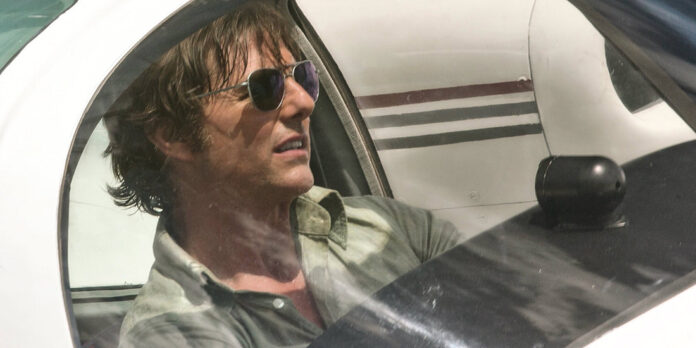 THE STORY – Barry Seal, a TWA pilot, is recruited by the CIA to provide reconnaissance on the burgeoning communist threat in Central America and soon finds himself in charge of one of the biggest covert CIA operations in the history of the United States. The operation spawns the birth of the Medellin cartel and almost brings down the Reagan White House.

Tom Cruise starred earlier this year in the abysmal and atrocious action-horror franchise starter “The Mummy.” That film was rightfully panned by critics and did not do as well as the studio had hoped at the box office. At age 55, people now seem to be wondering how long Tom Cruise can keep up being an action hero in today’s demanding moviegoing climate. The answer is, probably much longer as someone like Liam Neeson has demonstrated lately. However, the types of films which Cruise decides to take on needs to change. If “American Made” is a signifier for that change, then count me as one of the people who is on board for this new phase in Tom Cruise’s career.

Beginning with Jimmy Carter’s famous crisis of confidence speech (The one also heard in last year’s “20th Century Women“), “American Made” chronicles the bizarre series of events surrounding Barry Seal (Tom Cruise) during the late 70’s and early 80’s. Barry starts the film out working for TWA as an airline pilot in 1978. Due to boredom, he quits his job and decides to work for Monty Schafer (Domhnall Gleeson) who works for the CIA. Tasked to fly small planes over foreign countries and take pictures which will be brought back to the government as intelligence, it is a risky job that pays very low. Fed up and struggling to provide for his wife (Sarah Wright), who does not know he has quit his job and children, Barry decides to start smuggling cocaine out of Columbia at $2000 per every 2.2lbs under the watchful and intimidating eyes of the Mexican drug cartel led by Jorge Ochoa (Alejandro Edda) and Pablo Escobar (Mauicio Mejia). With an overflow of money, his own private air force running drugs and guns and later, the backing of the United States government, Barry finds himself way in over his head as the situation becomes more dangerous and complex.

Directed by Doug Liman, who previously also worked Cruise on the criminally underseen “Edge Of Tomorrow,” their new film “American Made” is not a big budget action film despite what the trailers want you to think. Instead, it is a fast and loose movie that is light on humor and light on action. There are humorous moments that are mostly stretching the limits of how truly ridiculous this fictitious re-telling of true events can get. There is an action beat here and there such as a scene where Cruise has to improvise and land a full-size plane on a civilian side street while dodging the authorities. Think of “American Made” as “Narcos” the movie and you’ll have a pretty good idea of what you’re in for. It feels like a longer than normal episode of the popular Netflix show, with a flair and style by Liman (Shaky handheld cameras, high key cinematography, accentuated colors, sporadic editing, and odd camera angles) that channels his inner Steven Soderbergh. It’s a ton of fun to watch and that is mostly due to Liman’s breezy directorial effort and Tom Cruise’s charismatic leading charm. This is how Cruise should be used at this stage in his career. He should not be punching out the drug cartel. He should be using his wits and charm to outsmart and outrun them.

“American Made” does have its flaws though. Supporting characters such as Caleb Landry Jones as Barry’s idiot brother-in-law JB & Jesse Plemmons as a local Arkansaw cop are wasted in their underwritten roles. Sarah Wright as Lucy Seal, Barry’s wife, is not given enough material to work with either as she plays the long-suffering wife who goes along with Barry’s insane plan because she see’s how much it is bringing in and how it is providing for her family. Also, Domhnall Gleeson, although great to see him pop up here and receive second billing next to Cruise, is also sadly underwritten and not given enough to do here. He seems to be sleepwalking through his performance as “American Made” is so concerned with being the Tom Cruise show it does not allow anyone else to shine. The film also plays it loose with the facts which will certainly irk some viewers coming in and hoping for a docudrama, which makes sense considering the cinema verite style which Liman shoots the film in.

Overall, “American Made” is a surprisingly entertaining telling of a bizarre story that was fun while it lasted and like all stories of greed and excess, inevitably came crashing down for all of those involved. Barry is a character we root for because he’s desperate, because he feels human and because what he does, he does very well. The overly intricate and unusual tale of how this pilot went from working for the government to smuggling drugs out of foreign countries to working for the government again while smuggling drugs out of foreign countries is a fun one that will not leave a lasting impression or even land in anyone’s Top 10 list this year. But it does show promise for Tom Cruise’s career as he embarks on a new chapter in his already stellar career.