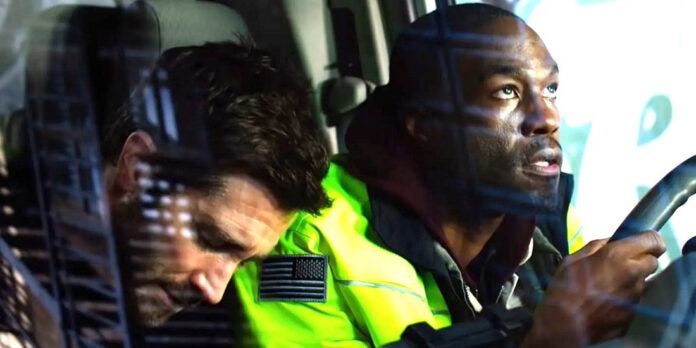 THE STORY – Needing money to cover his wife’s medical bills, a decorated veteran teams up with his adoptive brother to steal $32 million from a Los Angeles bank. However, when their getaway goes spectacularly wrong, the desperate thieves hijack an ambulance that’s carrying a severely wounded cop and an EMT worker. Caught in a high-speed chase, the two siblings must figure out a way to outrun the law while keeping their hostages alive.

​​​Given his filmography, hearing that Michael Bay is back with another film may cause apprehension. After three years, he’s back with a smaller budget and an adaptation of a 2005 Danish film by Laurits Munch-Petersen and Lars Andreas Pedersen. While this may shock the average reader who believes that critics can’t have fun with a Michael Bay film, “Ambulance” is certainly a good time at the movies.

The film opens with an introduction to Will Sharp (Yahya Abdul-Mateen II), a war veteran who is trying to secure insurance for his wife’s surgery. Failing to secure this, Will turns to his adoptive brother Danny (Jake Gyllenhaal). A life-long criminal, Danny offers to give Will the money if he partakes in a $32 million bank heist. Begrudgingly agreeing to do so, the brothers find themselves in a disastrous situation during the heist, sparking a call from the LAPD, Danny and Will escaping the scene in an ambulance, and the Emergency Medical Technician (EMT) on board, Cam Thompson (Eiza González), stuck to face the two brothers while trying to keep an injured cop in her care alive.

Due to the COVID-19 pandemic, there were restrictions in place during the filming of “Ambulance.” Filming took place during the pandemic with a budget of $40 million. To compare the scale of how small that is for Bay, his most recent directorial feature from 2019, “6 Underground,” had a budget of $150 million. Of course, Bay is still able to incorporate many of the stylistic choices and techniques he’s known for, despite the smaller budget. The editing style is still incredibly rapid, something that at times helps build tension in some of the chase sequences and more suspenseful moments. Additionally, the cinematography is rarely stable, with plenty of zooms, shaky cam, and drone footage used to tell the story. It can be distracting at times, and it does take away from the narrative’s emotion. And yet, it feels like a signature part of Michael Bay, so it makes sense for it to be here.

“Ambulance” is a character-driven film, and the opening sequence sets up a compelling motive for Will. Abdul-Mateen II finds a balance between the action and the emotion through this story, creating a character that is hard to root against despite what his character ends up doing throughout the film. On the other hand, Gyllenhaal again shows that he can go insane on-screen and have fun as the criminal, Danny Sharp. Gyllenhaal is always willing to give his all in any role that he gets, and here he embraces the energy of Bay’s storytelling to create a character that is tough to predict. The leading performances are rounded off with what might be González’s best performance to date, playing EMT Cam Thompson. Cam is the character that the audience relates to and associates themselves with, and González must balance the emotions of being abducted with the pressure of being an EMT and trying to save a police officer in a fast-moving ambulance.

Bay may have surprised here with “Ambulance,” but it’s not all praises. Screenwriter Chris Fedak set up the story with Will trying to take out insurance, highlighting his military background and that he fought for the country and just wants to receive help looking after his wife. This is a narrative that is being explored more on-screen. The Sundance 2022 film “892,” starring John Boyega, tells a similar story but with a much more focused and drama-based perspective. While that’s not the sort of filmmaking Michael Bay is interested in, it is a shame that the screenplay primarily uses this plot as a set-up for a high-speed ambulance chase rather than also using it to explore the issue further. Instead, a police officer is shot, and the film focuses on trying to save his life and getting the brothers out of even more trouble.

“Ambulance” isn’t the best thing made for cinematic release over the past few months, and that’s okay. Instead, what we have is a fun time at the movies with some real stakes and some fantastic performances. If you can cope with the choppy editing style and over-the-top drone footage to capture this surprisingly tense tale, then it will be easy to have fun with Bay’s latest. Who knew that I would be able to recommend a film directed by Michael Bay – let’s hope that continues.