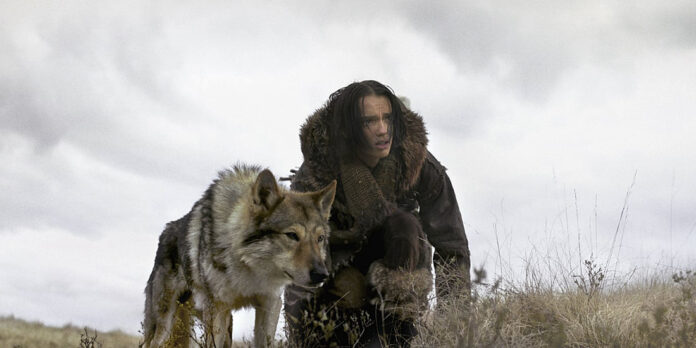 THE STORY – Young Keda tries to survive alone in the wilderness after he’s left for dead during his first hunt with his Cro-Magnon tribe. He soon forms an unlikely alliance with a lone wolf that was abandoned by its pack. Facing overwhelming odds and nonstop danger, Keda and the wolf must now trek through a harsh and unforgiving landscape to make it home before winter.
​
THE CAST – Kodi Smit-McPhee & Jóhannes Haukur Jóhanness

​​​​During the final Ice Age, Mother Earth was the ruler of all things, not humans. This is the setting we find ourselves watching in “Alpha,” a story of a boy named Keda (Kodi Smit-McPhee) who goes bison hunting with his father (Jóhannes Haukur Jóhannesson) and tribe mates, only to be left for dead after being pushed over a cliffside by the beasts they set out to hunt. Keda domesticates an injured wolf while tending to a broken leg, and together, they begin a journey to return to Keda’s village. The two friends come across all kinds of wildlife, including boars, hyenas, and other wolves, though the true antagonist of the film is the looming winter, creating a race-against-time feeling that adds a hint of tension to carry the film. Throughout the icy wastelands, Keda learns what it means to be a provider, and completes his original quest to become a man in a surprising and unexpected way.

Though it is not a rookie cast, “Alpha” has characters that act more as conduits of storytelling than as forces of their own will. Where there could be deep emotion, there tend to be blank faces and half-baked reactions, such as when Keda’s mother (Natassia Malthe) questions her son’s ability to survive in the wilderness. Her anxiety read more as sleepiness, and even her following scenes left something to be desired. Jóhannesson delivers a respectable performance and makes some of the more upsetting scenes more believable than his fellow castmates do, particularly when expressing his grief and fear. However, the main relationship of the film is not Keda with the others in his tribe, but rather Keda with the injured wolf he befriends and names “Alpha.” Here is where the core of the movie rests, and the scenes that focus on the friendship between man and wolf blossoming are genuinely heartwarming and carry the film. Watching Keda bridge the gap between species by first caring for and then hunting with Alpha is truly joyful, but does ring hollow when you realize that this relationship is no longer equal. Just days earlier, Alpha and Keda were predators on equal footing in the eyes of the food chain, but through sheer necessity, domestication becomes a reality. Unfortunately, the film misses the opportunity to comment on this new relationship, leaning on the idea that wolves will become dogs and dogs are pets, so in this way, everything is as it should be.

The film was not anticipated to be a deep analysis of man’s relationship to other species or even man’s relationships to the environment. Rather, the film was set up to be a visual wonder, with cinematography and CGI joining together in a beautiful telling of how man- and wolf-kind became intertwined throughout history. Incredible landscapes and editing tricks start the movie off strong, but soon the repetitive perspective shifts, silhouettes, and fades-to-black become tired, and even the intensely starry skies hurt to look at after a while. CGI animals, especially the wolves, are contrasted harshly from the real ones, which is interesting in light of the claims that the filmmakers were so committed to realism they killed and skinned five bison to be used in a scene. In any case, “Alpha” finds its visual formula early and sticks to it, for better or for worse.

At its best, “Alpha” is a reminder that humans have not always ruled the Earth. At its worst, “Alpha” is a rote man vs. nature film, following a prescribed plot line without straying from expectations in any meaningful way. While it may be worth a theater viewing, it certainly doesn’t warrant a rewatch, and has little if any Academy Awards potential, even for below-the-line categories.