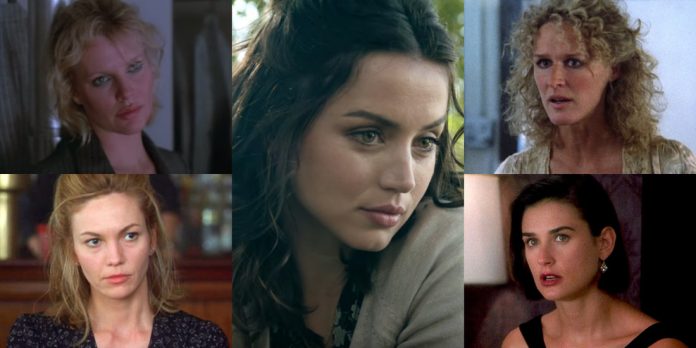 Lyne started off making commercials in the 1970s. He quickly proved himself a gifted stylist, and word of his talent spread so wide that Stanley Kubrick contacted him to ask him about a particular filter he used in a milk ad. It was only a matter of time before Hollywood came knocking, and Lyne made good on the hype with his blockbuster sophomore release, “Flashdance” (1983).

“9 ½ Weeks” (1986) marked a turning point for Lyne. It was an opportunity for him to use the visual mastery of his previous works and meld it with the darker subject matter. The film details a 9 ½ week affair between an art gallery employee (Kim Basinger) and a New York stockbroker (Mickey Rourke) and the emotional turmoil that results when they realize they aren’t good for each other. Once again, the story is thin, but Lyne is able to take the couple’s internalized shortcomings and externalize them through a series of beautifully composed images.

The characters are repeatedly isolated from the rest of the world and, in some of the raciest instances, silhouetted against a neon backdrop. These choices not only lend themselves to titillation, but they serve to underline the escapist mentality that both parties cling to. There might’ve been potential for connection, but the film’s ultimate conceit is that reality cannot exist within the erotic fantasy. One is going to destroy the other. The sex scenes in “9 ½ Weeks” aren’t nearly as shocking as U.S. censors made them out to be (the stateside cut was heavily edited). However, the chemistry between its stars and the lingering sense of melancholy still holds up beautifully.

The desire to escape the fantasy is what made Lyne’s next film, “Fatal Attraction” (1987), such a rousing success. Here was a story that put us in the shoes of a businessman (Michael Douglas) who cheats on his wife, and yet, we’re made to root for him when he discovers his mistress (Glenn Close) is a psychopath. The premise could have been botched any number of ways, but Lyne manages to strike a surgically precise balance between groundedness and absurdity.

There’s a ferocity to the characters’ early scenes that’s entrancing, and Lyne’s brilliance lies in how quickly he’s able to twist this excitement into nauseating regret. He leaves us on the hook with the Douglas character so that we must experience the same embarrassment and concern over whether his family is in danger. “Fatal Attraction” also marked the apex of Lyne as a cultural force. People who have never seen the film still reference the title when discussing stalkers, and the tropes established here (graphic sex scenes, murder plots, hapless men [usually Michael Douglas]) would go on to kickstart the golden age of the erotic thriller. The film earned six Oscar nominations, including Best Picture and Best Director, and remains, for many, the genre’s definitive release.

“Indecent Proposal” was another turning point for Lyne. He was no longer capturing the zeitgeist and was relegated to looking for specks of originality in a genre that had been picked clean. The film stumbles in some notable areas (there’s an oddly sterile quality to the sex scenes), but even in a limited capacity, Lyne manages to imbue a deeper sense of pathology to characters who could be seen as superficial. The premise, which involves a stranger (Robert Redford) offering $1 million to bed a married woman (Demi Moore), is an evolution of the hollow pursuits in Lyne’s earlier films. The faux-prostitution angle could even read as a knock on the commerciality of the erotic thriller at the time of “Proposal” ‘s release.

“Lolita” (1997) and “Unfaithful” (2002) represent a fascinating late chapter in Lyne’s career. The former is a remake of the Stanley Kubrick film of the same name (bringing the discussion about the milk filter full circle), and the latter is a remake of the French thriller “La Femme infidèle.” Both films allow the director to explore sexually amoral behavior, albeit in quieter ways than his 80s output.

“Lolita” is a tougher watch than its 1964 predecessor, primarily because of Lyne’s decision to remove the black comedy. The story of a middle-aged man (Jeremy Irons) pining for an adolescent girl (Dominique Swain) is tricky material to get through, and the director’s insistence on playing it straight can sometimes render it joyless. This newfound grimness would be much better served in “Unfaithful.”

“Unfaithful” was a methodical return to form. It shows the damage that a chance affair can inflict on the lives of a married couple (Richard Gere and Diane Lane). Rather than rely on stylish visuals, however, Lyne is content to let his actors guide the proceedings and let the gravity of the situation dictate the pace of the story. The result is a film that’s lower on thrills but higher in terms of insight. The best point of comparison is David Fincher’s handling of the serial killer mythos in “Se7en” (1995) and “Zodiac” (2007)– one is exaggerated and iconic, the other is subdued and intimate. The same observations can be applied to Lyne’s work when looking at “Fatal Attraction” as opposed to “Unfaithful.”

Have you seen “Deep Water” yet? If so, what did you think? What is your favorite film directed by Adrian Lyne? Let us know in the comments section below or on our Twitter account.