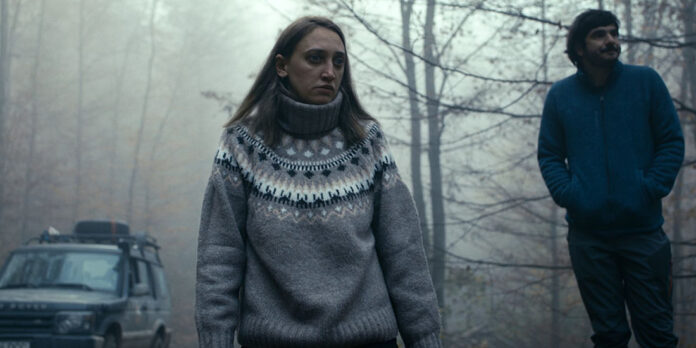 THE STORY – A group of teens go on a humanitarian trip, driving on quiet mountain roads to the village of Întregalde. As they’re helping an old man reach his job at a sawmill, the car goes off the road, forcing them to spend the night with the old man.

​​​Among the many striking things about “Întregalde,” the darkly sly new comedy by Romanian director Radu Muntean, is that in its early going, you’re never really sure what kind of a movie it’s going to turn out to be. Not in a bad “these guys don’t know what they’re doing” kind of way but much more of a “these guys know exactly what they’re doing, and I can’t wait to see where they take me.”

“Întregalde” begins innocently enough in a warehouse where a group of charity workers is packing and loading a large number of SUVs to transport holiday gifts to homes throughout the local towns in Transylvania. The volunteers all seem to know one another (in some cases, it’s suggested, all too well), and the group breaks up into teams of three, where pair-ups are largely determined by who dislikes whom the least.

The trio we follow is made up of frustrated romantic Ilinca (Ilona Brezoianu), hot-headed Dan (Alex Bogdan), who thinks he’s the group leader, and pragmatic Maria (Maria Popistasu), who is actually running the show. As they bicker among themselves, we’ve got the makings of a first-rate character comedy. That is until they spot an older man, Kente (Luca Sabin), who persuades them to give him a ride to an old sawmill. Certainly, the sight of the Gollum-like Kente would give anyone pause in stopping to offer a lift, but the young do-gooders feel they’re duty-bound to lend a helping hand. Big mistake.

At Kente’s urging, Dan takes a shortcut that leads them deep into an ominously dark forest, but their SUV soon gets stuck in the mud, and with no cell service, few passing cars, and the sun rapidly going down, they face the prospect of living through a freezing night in the woods. To make matters worse, Kente wanders off, and soon unidentifiable animal-like sounds begin to emit from the forest beyond. At that moment, Muntean begins to squeeze his vise-like grip on his material, and what started as a civilized comedy takes on the trappings of a first-rate horror film.

But Muntean is too wise of a filmmaker to attempt a complete genre switcheroo mid-film. Instead, he uses the tensions ginned up by the horror movie tropes to heighten the satire, whose tone soon becomes as dark as the night sky. That’s because the horror that becomes a key part of “Întregalde” comes not from any threat on the outside, but is instead contained within the SUV itself, as the three altruists begin to turn on each other and what is revealed is neither pretty nor charitable.

Romanian humor has long been known for its deep dark hue, almost to the point of actually approaching that of horror, so placing the two genres side by side seems logical. What Muntean does that’s so effective here, though, is when the horror begins to build, he diffuses it momentarily with a joke, then builds it up again. It is a tricky high-wire act, and though he does have a few unstable moments on the wire, he pulls it off in a surprising and satisfying manner with just an extra bit of style.

As with many Romanian films, there’s always a temptation to lay a political veneer over every tiny detail. Does the stuck-in-the-mud SUV stand for the Romanian government? Are the distant individuals ignoring their plight, the ruling elite? And is Kente (I shudder to think) a stand-in for the Romanian people? If you want to go down that rabbit hole, I hope you have a good time. I prefer just to sit back and enjoy “Întregalde” as a dark comedy that knows just when to stick in the knife and twist it just enough.