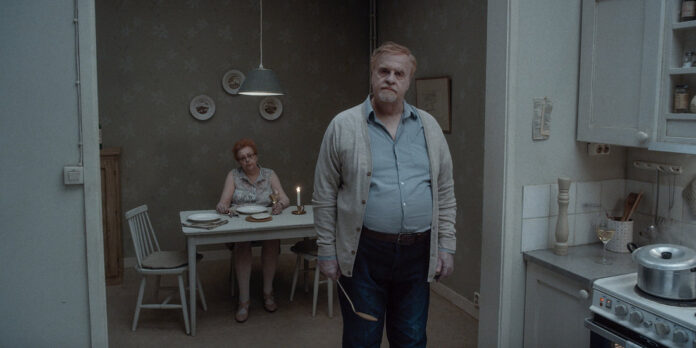 THE STORY – A kaleidoscope of the human condition includes scenes of a couple floating over war-torn Germany, a father and his daughter in the pouring rain, a teenager dancing outside a cafe, and a defeated army marching to a prisoner-of-war camp.
​
THE CAST – Lesley Leichtweis Bernardi, Ania Nova & Gloria Ormandlaky​

​You never know exactly what you’re going to get with a Roy Andersson film, but he’s an auteur with a style perhaps even more notable than his American Anderson counterparts, Paul Thomas and Wes. While the premise of his films is always different, the style is always the same: Static camera shots framing a series of tragicomic vignettes strung together very loosely around a theme. If you’ve seen one of his films, you’ve seen them all. Yet, there’s still something uniquely compelling about each of them. His latest, “About Endlessness,” draws inspiration from Scheherazade, a woman who saved her life by telling a murder-happy King a story for a thousand and one nights (although you wouldn’t necessarily know it from the vignettes presented). But, more so than any of Andersson’s previous films, “About Endlessness” does feel like one story: Andersson connects several scenes through characters and plot to create more defined emotional arcs and includes narration to move from scene to scene. He embraces the short story nature of “The Thousand and One Nights” to create something engaging and intriguing but not exactly welcoming to those who aren’t already fans of Andersson’s style.

That said, Andersson’s style is incredibly unique, and that’s sometimes enough. The colors of “About Endlessness” are ever-so-slightly washed out, giving the impression of a perpetually cloudy sky hanging over every scene. This is also recurring in the image of two lovers holding each other in flight over war-torn Cologne, a sequence that recalls the paintings of Chagall. The people, too, looked somewhat washed-out, forever melancholy even when they’re happy. When a patron in a bar full of people watching the snow outside cheerfully asks out of nowhere, “Isn’t it fantastic?” no one shares his enthusiasm. And as quickly as he shouted, he walks it back: “I think so, at least,” he mutters, before falling back in line with the prevailing mood. The pitch-black humor of many of the vignettes is rooted in the melancholy air that pervades Andersson’s world. Sometimes it’s the incongruous energy of one person that causes laughter, and other times it the razor-sharp satire: A priest, losing his faith in the existence of God, taking a moment to get drunk on the communion wine before stumbling out in front of his congregation. That priest makes several appearances in the film, each one better than the last. Andersson has gotten more confident with bringing back characters to create running gags, but for the most part, every scene is entirely self-contained – a perfect little short story that may only last the length of a sentence. The details he packs into each scene, from the character business to the costumes and set design (every scene was shot on a set built from scratch), are impressive and reward repeat viewings.

Unfortunately, if you’re not able to get on Andersson’s wavelength, “About Endlessness” may very well feel endless despite its slim running time. The film’s narration, which always begins with “I saw a,” before describing a person or group of people, can be particularly maddening because it isn’t always directly related to what we see or presents a detail that seems important but turns out not to be. Scenes will often take an emotional left turn from the set-up, as in one case where we see a man approach a woman in a bar who turns out to not be the woman he was looking for, with the narration, “I saw a man who had lost his way.” Or when we see a man crying over a dead woman with a knife, alongside the narration, “I saw a man who wanted to protect his family’s honor and changed his mind.” There are moments where this comes across as pretentious, and others where it plays as accessibly deep. Even as a fan of Andersson’s work, there were scenes in “About Endlessness” that made me roll my eyes in annoyance or scratch my head in befuddlement. With so many little scenes taking place, not all of them can be winners.

Roy Andersson’s films are all about mood and his remarkable ability to create and sustain that mood across so many vignettes. He may never have written a scene that so thoroughly explains how to approach his films as he has in a late scene here, with two young people discussing thermodynamics: “Everything is energy, and it cannot be destroyed. It is endless. It can only change from one form to another. I am energy, and you are energy, and your energy and my energy can never cease to exist. It can only transform into something new.” Every person in every vignette of an Andersson film has distinct energy, and that energy is the only thing that stays constant throughout the film. But part of the beauty of “About Endlessness” is the acknowledgment that we don’t know what we don’t know – that life is governed by things we cannot see and cannot understand, and what awaits us could very well be just as absurd as life itself. As our scholars of thermodynamics point out in their scene’s kicker: “Theoretically, our energies can meet again. Then again, maybe you’re a potato. Or a tomato.” We can’t know, but at least we have Roy Andersson making films to help us laugh and cry at life’s absurdities until our energies transform into something new.