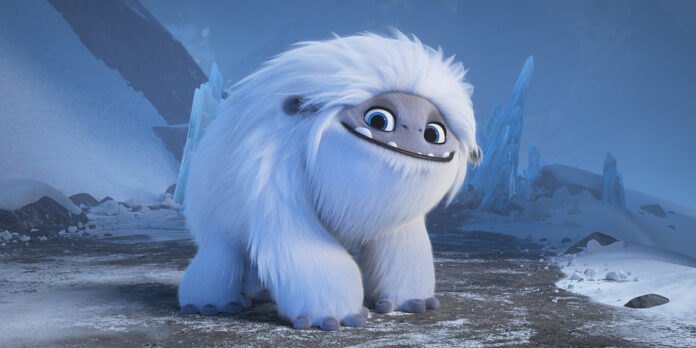 THE STORY – After discovering a Yeti on the roof of her apartment building, teenage Yi and her two friends embark on an epic quest to reunite the magical creature with his family. But to do so, they must stay one step ahead of a wealthy financier and a determined zoologist who want to capture the beast for their own gain.
​
THE CAST – Chloe Bennet, Albert Tsai, Tenzing Norgay Trainor, Eddie Izzard, Sarah Paulson, Tsai Chin & Michelle Wong

​​​​​​It is always a delight to find a new production company that’s focusing on making animated features for children, especially when they flout the traditional ideas of what makes a good kids film. All too often films aimed at the younger set are predictable and boring for those who don’t fit the demographic, but “Abominable” doesn’t fall into these typical tropes while also being one of the most gorgeous animated films released this year. Pearl animation is a relatively new company that before this was generally the arm of DreamWorks that adapted their films for Chinese audiences but they came out swinging with their first feature.

Set in modern China, “Abominable” focuses on a young woman, Yi (Chloe Bennet) who lives with her mother and grandmother in a bustling metropolis. Yi’s father has died recently before they could take a trip through Asia that they had been planning for years. Unsure of how to move on Yi buries herself in odd jobs to earn the money to go on that trip in honor of her father. Her plans are thrown to the winds however when a magical yeti takes refuge on her apartment’s rooftop after escaping a hidden lab. Yi quickly befriends the yeti, who she names Everest, and is determined to help them find a way back home to the Himalayan mountains. All too soon the people behind the lab come hunting for Everest and Yi and two of her friends find themselves pushed off onto a journey that takes them through China and beyond always trying to stay one step ahead of the bad guys.

The antagonists of the story are Mr. Burnish (Eddie Izzard) the owner of the vast corporation that is hunting the yeti and Dr. Zara (Sarah Paulson) a zoologist he has employed to help him prove the yeti’s existence to the world. Both Izzard and Paulson give fun performances that play perfectly with the characters who also end up skirting expectations with their development. Yi is accompanied on her journey by the basketball obsessed Peng (Albert Tsai) and his self-obsessed older cousin Jin (Tenzing Norgay Trainor). Both of them contribute something vital to the story, whether it is the childish comic relief of Peng playing with Everest or the gradually growing awareness of Jin learning to value the world around him. The voice acting of Bennet, Tsai, and Trainor feels natural and their camaraderie as a group is what carries the story through it’s less engaging moments.

DreamWorks is no slouch in the animation department, but Pearl Studio has upped its game in an impressive way. From the flowing grasses to snowstorms to rain on the water the visual artistry on display is phenomenal. As the story moves across China they embrace every opportunity to showcase the skills of their animation teams, particularly in a few scenes where Everest performs magic and the screen becomes a riot of color and light as the natural world around them blossoms into lush impossibility. It is well worth seeing the film just to enjoy how beautiful it is.

“Abominable” is undeniably geared towards younger children with its simple plot and tone, but it doesn’t let that become a hindrance to how well it explores the concepts of grieving and acceptance of change. It embraces being something very life a fairytale and uses that level of fantasy to also discuss the darker parts of life in a franker way than children’s films usually do. However, it never lets it get too dark before slipping in some comedic relief allowing even the youngest of viewers a chance to ponder these ideas without it being too scary. A surprisingly great film that will probably be on repeat in more than a few households once it is released, “Abominable” is sure to be a hit with little kids and the rest of their families.