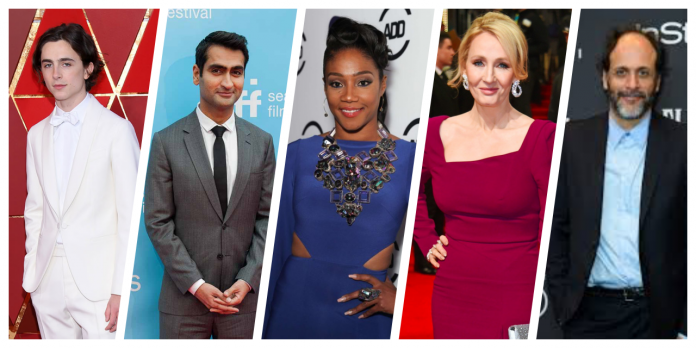 ​In the wake of the #OscarsSoWhite controversy, the Academy of Motion Picture Arts and Sciences made a much needed push for greater diversity. The past two years have seen record number of invitees (683 in 2016, 774 in 2017), with a great deal of women and people of color making up those new classes. 2018 makes for a third record-breaking year, as the Academy invited a shocking 928 people to join their ranks. It’s certainly possible that this change in membership could affect the Academy Awards themselves.

The Academy’s Board of Governors considers new members annually. A person becomes eligible for consideration either by receiving a nomination or from being sponsored by two members of the branch they would like to join. This new class is 49% female, bumping the overall percentage of women in the branch to 31%. People of color made up 38% of the invitees as well.

With such a huge list, it’s a combination of expected names along with some surprises. Kumail Nanjiani made the list after receiving a nomination last year. Relatively new stars Emilia Clarke, Timothee Chalamet, Daniel Kaluuya, Allison Brie, Taron Egerton, Daisy Ridley, Amy Schumer, and Tiffany Haddish all received invites into the actors branch. Among the invited directors were Sean Baker (“The Florida Project”), Justin Simien (“Dear White People”), Chloe Zhao (“The Rider”), and Luca Guadagnino (“Call Me By Your Name”). J.K. Rowling, who has been entering the filmmaking world by writing the “Fantastic Beasts” series, received an invite to the Writers branch.

There were plenty of people invited who surprisingly weren’t members yet. Michel Gondry, who won Best Original Screenplay for “Eternal Sunshine Of The Spotless Mind” 14 years ago, just received his invitation. So did Abigail Breslin and Quvenzhané Wallis, who both received nominations years ago as children. Wallis is also the youngest of the new members at 14 years old. Jason Hall received a nomination for the “American Sniper” screenplay in 2015, but only just made the list. Some invitees have been around for quite some time, and just hadn’t received an invite yet: Christine Baranski, Hank Azaria, Toby Jones, Kyra Sedgwik, Liv Tyler, and Jada Pinkett Smith.

How could this new membership affect the Academy Awards? Increasing diversity could naturally see more attention drawn to more diverse stories. 2017 may have seen the start of this new shift. Of the nine Best Picture nominees, only three starred straight white men. Four of the films were led by women. As the Academy reaches a greater level of parity, more female-led and/or POC-led films could receive more attention. Hopefully, as more people of color are invited, the chances of ignoring diverse artists are lower.

Which invitees surprised you? How do you think these members will affect the Academy Awards? Let us know in the comments.