A Look At The Career Of Jesse Plemons 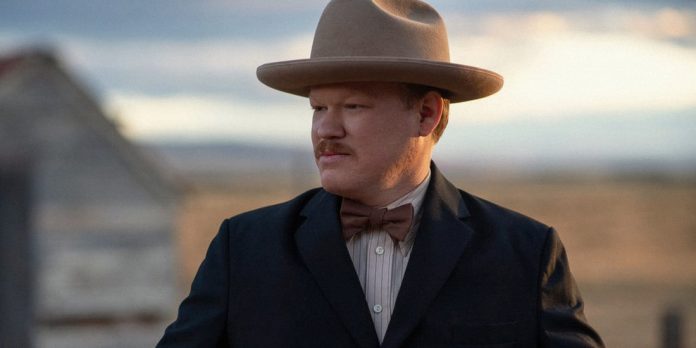 It seemed especially ironic then that Plemons had never been nominated for an Academy Award himself despite all of his Oscar-nominated films. That is, until this year. As the highly-educated but lonely George Burbank in Jane Campion’s “The Power of the Dog,” Plemons delivers a performance that appears reserved on the surface but slowly reveals a character with enormous emotion buried deeply underneath. Plemons’ work has brought him his first Oscar nomination as Best Supporting Actor and stands as one of his best onscreen performances to date.

From the age of 18, Plemons began to hone his acting chops on television and had the wisdom (and a bit of luck) to do it on several of the most acclaimed TV series of the 21st century — “Friday Night Lights” as an initially shy geek who comes into his own on the high school football squad; “Breaking Bad,” as a mild-mannered exterminator who turns into a stone-cold killer; and Season 2 of “Fargo” as a butcher’s assistant who tries to cover up a hit-and-run death, a role for which Plemons earned his first Emmy nomination. (He garnered his second for the Netflix limited series “Black Mirror: USS Callister.”

With the acclaim and awards generated by his TV work, it was inevitable that Plemons would make his way to films, and, given his track record, he quickly came to the attention of A-list directors. After a small part in Paul Thomas Anderson’s “The Master,” Plemons went on to work with the likes of Steven Spielberg (twice), Jane Campion, Adam McKay, Charlie Kaufman, and Martin Scorsese. Importantly though, despite an occasional leading role here or there, Plemons’ best performances have been in films were offered strong support. Here are ten of his most acclaimed films that have led to Plemons finally receiving his very own moment in the Oscar spotlight.

Bridge Of Spies (2015)
In Steven Spielberg’s Cold War thriller, Plemons plays Joe Murphy, a U-2 pilot who is called upon to identify a pilot friend Francis Gary Powers (Austin Stowell) in a prisoner exchange in 1960s Germany. Spielberg used Plemons’ All-American look to great effect in establishing his character’s bona fides. Plemons’ work in a high-profile Spielberg film likely brought the actor to the attention of other A-list directors with whom he would soon be working.

Other People (2016)
Plemons has a rare starring role in writer/director Chris Kelly’s comedy focusing on David (Plemons), a gay comedy writer, who, as his life is falling apart elsewhere, must return to his childhood home in Sacramento to attend to his dying mother (Molly Shannon). The comic role was unlike any Plemons had tackled before (or since), but he handled the film’s leading role with assured ease.

The Post (2017)
In his second film with Steven Spielberg, Plemons portrays real-life Washington litigator Roger Clark, who, even though his advice that the Washington Post should wait to publish the Pentagon Papers was ignored, nonetheless stood up in court to defend the paper’s right to publish them. In a cast filled with such acting greats as Meryl Streep and Tom Hanks, Plemons was a standout in “The Post,” digging deep into his character to bring to life the courage that it took for Clark to make his stand.

Hostiles (2017)
Plemons reunited with his “Black Mass” director Scott Cooper for the Western “Hostiles,” set in 1892 New Mexico in which Plemons delivers a strong performance as U.S. Army Lt. Rudy Kidder, a fresh-faced West Point graduate who may be smart in book learning but has a lot to learn about the Comanches, whom he has been assigned to handle. It is the familiar role of the outsider trying to fit in that Plemons has portrayed before, but he adds enough shades of character to keep us engaged.

​Game Night (2018)
If you were trying to predict which film would offer Plemons his breakout role, few would have guessed it would be in this action-comedy, which surprisingly garnered some of the best reviews of 2018. But if the reviews for “Game Night” were good, the reviews for Plemons’ performance, as depressed cop Gary Kingsbury, were stellar with his hilariously weird presence stealing every scene he’s in. Plus, the image of Plemons’ cop carefully stroking the fluffy fur of his white terrier remains an internet meme to this day.

Vice (2018)
As “Vice,” Adam McKay’s loose biopic of Vice President Dick Cheney, begins, the story seems to be all about Kurt (Plemons), an Afghan veteran who is struggling to raise his family before he is struck and killed by a van. Kurt, however, doesn’t go away, as he hangs around to become the film’s narrator. As the familiar events of the Cheney reign play out on screen, Plemons’ narrative interloper offers a pleasant respite from the other characters’ despicable deeds, and when the film’s major twist involving Plemons kicks in, he becomes the real heart, so to speak, of McKay’s corrosive satire.

The Irishman (2019)
It seemed inevitable that Plemons would cross paths with Martin Scorsese, and the happy result was Scorsese’s gangster epic, “The Irishman.” Plemons fit snugly into the Scorsese world as the real-life Chuckie O’Brien, who was taken under the wing of Teamster boss Jimmy Hoffa (Al Pacino) as a child and raised as if he was his own son. Plemons plays O’Brien as a conflicted soul, caring for his foster father while possibly being responsible for luring him into the car ride that would lead to Hoffa’s assassination. It’s a small but key role that Plemons makes indelible.

I’m Thinking Of Ending Things (2020)
Plemons faced one of his greatest acting challenges in the latest puzzle by writer-director Charlie Kaufman, “I’m Thinking Of Ending Things.” He portrays Jake, a placid young man who is driving his new girlfriend (Jessie Buckley) to his family home to meet his parents. Kaufman’s dialogue deliberately gives dialogue to Jake that might seem banal on the surface. Still, in Plemons’ hands, he uses that to create a portrait of a passive-aggressive individual who can barely hide his need to control. It is a complex performance (that’s also a little bit creepy) and one of the actor’s best.

Judas And The Black Messiah (2020)
The through-line of Shaka King’s Best Picture nominee, “Judas and the Black Messiah,” is the events leading to the assassination of Black Panther leader Fred Hampton (Daniel Kaluuya), but it is the behind the scenes pas-de-deux by FBI informant Bill O’Neal (Lakeith Stanfield) and his Special Agent handler Roy Mitchell (Plemons) that provides the film with much of narrative depth. How the two actors evolve the relationship between their characters — at one moment, it’s like father and son, at others jailer and captive — gives the film an added emotional resonance.​

The Power Of The Dog (2021)
It is a testament to the power of Plemons’ performance in “The Power of the Dog” that, even when often physically absent from the back half of the film, his presence is always felt throughout. The quiet strength that his George Burbank reveals in the defense of his marriage to widow Rose Gordon (Kirsten Dunst, Plemons’ real-life partner) is certainly in the actor’s wheelhouse, but the poignancy he delivers in his performance is unexpectedly moving. His delivery of the line “I just wanted to say how nice it is not to be alone” will simply break your heart.

There is a very good chance that Plemons’ streak of appearing in Best Picture nominees will likely remain unbroken in 2022 as he reunites with Scorsese, this time in a leading role, in the highly-anticipated Western crime drama “Killers of the Flower Moon” expected to be released this fall. Until then, we can be happy in the fact a truly outstanding supporting actor will at long last finally get his moment in the Oscar spotlight.

What is your favorite Jesse Plemons performance? What did you think of his Oscar-nominated work in “The Power of the Dog?” Do you think he’ll get nominated again next year for “Killers Of The Flower Moon?” Let us know in the comments section below or on our Twitter account.