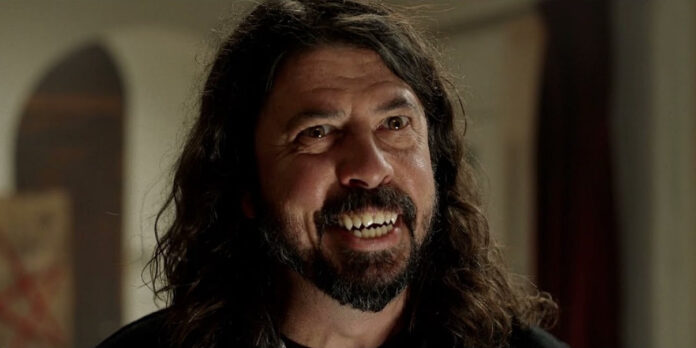 THE STORY – Members of the rock band Foo Fighters move into a mansion to record their 10th album. Once in the house, singer Dave Grohl finds himself grappling with supernatural forces that threaten both the completion of the album and the band members’ lives.

​​​I’m not a rock and roll fan, but even I can’t deny the Foo Fighters’ impact on the music industry. They’ve been making hits for almost 30 years, they were inducted into the Rock and Roll Hall of Fame last year, and people likely have at least one of their songs always stuck in their heads. Sometimes, though, even the greats have a little trouble thinking of their next hit.

That’s the plight the band finds itself in in “Studio 666.” In what is the total diametrical opposite of the Beatles’ comedy/musical, “A Hard Day’s Night,” Foo Fighters members Dave Grohl, Nate Mendel, Pat Smear, Taylor Hawkins, Chris Shiflett, and Rami Jaffee must come face-to-face with some demons (literally) as they attempt to produce their 10th studio album. It’s gruesome beyond words with a few fun cameos, but the story itself lacks creativity.

The film begins at an Encino mansion in 1993. Jenna Ortega (playing an unnamed character) is crawling on the floor and covered in her own blood after being brutally attacked – for the second time this year, thanks to “Scream.” Her situation doesn’t look good, and sure enough, it gets even worse. Fast forward to the present day, the Foo Fighters are hoping to break the mold with their 10th record, but they lack any song ideas. The label’s chief executive (Jeff Garlin) suggests they take up shop at the same Encino mansion from the start of the film and see if inspiration comes to them.

The abandoned mansion gives off creepy vibes – with or without a brutal murder taking place or their neighbor (played by Whitney Cummings) warning them of its evils – but the acoustics inside are perfect for the band. Soon, though, Grohl starts experiencing terrifying dreams and seeing demons around him. He even has a not-so-friendly vision of Lionel Richie, who is hilarious in his short cameo. But things really change for the frontman when he discovers the root of the evil in the mansion’s basement and becomes possessed by an evil spirit. It wants him to finish a song that was started by the previous inhabitants, a band called Dream Widow, but never finished. The other band members aren’t into this seemingly impossible task, especially when Grohl says the song needs an L sharp note (which doesn’t exist in music). As the spirit takes a tighter hold of Grohl, finishing the album becomes the least of these musicians’ worries.

Though the band is placed in a wacky and horrifying situation, it’s fun to peel back the curtain and see them hang out with each other and make music. For those unfamiliar with the group, it’s enjoyable to learn about each of the members and see their relationship on screen. The musicians likely won’t become Hollywood’s next movie stars, but it’s fun to see them in this crazy film. Fans of the Foo Fighters might be a little disappointed that there is no new music developed, but it’s still enjoyable seeing them jam out together. Horror fans will undoubtedly find pleasure in the film’s truly gruesome moments.

Ultimately, though, “Studio 666” doesn’t leave much of an impression, especially since there’s no suspense or twists, and it’s very easy to figure out where the story is going. Also, the lack of backstory on Dream Widow and that band’s demise is disappointing. We get tidbits of what happened to the lead singer and what he did to his fellow band members, but none of that is further explored. It would have added some variety to the film, which just focuses on the Foo Fighters and gets a bit stale. And after seeing Ortega at the beginning of the film, it would have been nice to see more of her. There’s only one other moment where she’s on screen, but for less than a minute and with barely any lines. Not to mention the lack of screen time for Leslie Grossman, Will Forte, and John Carpenter (who wrote the film’s theme song). It’s a total bummer to see so much talent wasted. But if you’re just here to watch the Foo Fighters jam out, have a not-so-great time in a mansion, and see gallons of fake blood, this is the movie for you.