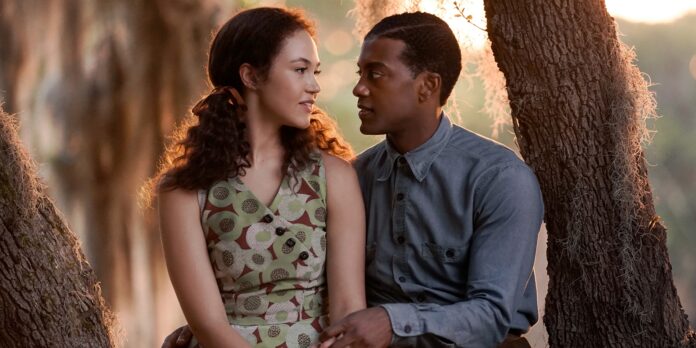 THE STORY – A tale of forbidden love and family drama unravels 40 years of secrets and lies in the deep south.

Over 25 years ago, multi-talented actor/writer/producer/director Tyler Perry wrote his first-ever film script. Following a meeting with playwright August Wilson in the 1990s – at one of Wilson’s shows in Atlanta – Perry felt inspired. He wrote a story he wanted to tell and subsequently tried to share it with an audience. Shelved for years until timing and opportunity arose, “A Jazzman’s Blues” is Perry’s passion project come to life. The film has the quality of a filmmaker finding their voice again, which speaks to the early days of the script and Perry discovering which story he wanted to explore. With the backing of Netflix, his ambition is met with the budget for an elaborate production to tell a story of forbidden love, among other plots. “A Jazzman’s Blues” can often be melodramatic and self-indulgent, in addition to requiring a balance of tone that Perry doesn’t have complete control over. But the film has the quality of a filmmaker exploring their voice and makes this telling of Black experiences an intriguing rediscovery of Perry’s talent.

Spanning over decades, “A Jazzman’s Blues” tackles an immensity of themes. The story begins in 1987 in Hopewell, Georgia, with the pressing for an investigation into an unsolved murder. An older woman walks into a racist politician’s office with hundreds of letters in hand, explaining that the contents of each letter contain all the information needed to solve a 1940s murder in the same town. As the politician reads through each letter, the film takes you back in time to where the story really begins. Set in the rural South in the late 1930s, Bayou (Joshua Boone) is a shy teenager who lives with his parents – father Buster (E. Roger Mitchell), mother Hattie Mae (Amirah Vann) – and older brother Willie Earl (Austin Scott). The story often plays as a dysfunctional family drama; Bayou experiences constant abuse from his father and older brother. Diffusing the tension is Bayou’s loving mother, who tries her best to shield him from pain and misunderstanding. The drama escalates when Buster suddenly leaves for Chicago, acting in the confidence of his musical talent. Music runs in the family, from Buster and Willie Earl’s instrumental gifts to Bayou and Hattie Mae’s beautiful singing voices. Music becomes the catalyst for the unraveling of varied emotions when Willie Earl brings home a drunken European man one evening. The man claims he can get Willie Earl a music career at the Capital Royale in Chicago.

Twists and turns in the story stem not only from musical elements but from a romance at the film’s core. Bayou sneaks out of his house at night to meet with Leanne (Solea Pfeiffer), a teenage girl who lives nearby with her abusive grandfather. Her mother had abandoned her in a bucket, hence the nickname “Bucket” mentioned among other characters in the community as a piece of gossip. Every night during one summer, Leanne tosses a paper airplane through Bayou’s window, a romantic trope that finds its way into his singing later in the film. Bayou and Leanne meet at a tree spot and talk for hours. The two fall in love and plan to run away together. But their relationship is threatened when Leanne’s mother reenters the picture and disapproves, forcing the family moves to Boston. The separation is upsetting and feels as such, in part thanks to impassioned performances by Boone and Pfeiffer in the roles of two lovers who have each other’s hearts. For every letter Bayou writes to Leanne and gets sent back from Boston, a pang of heartache kicks in. While the screenplay can be overly sentimental and overpower their chemistry, Perry firmly establishes this romance as the unwavering emotional anchor of the film. He also introduces an additional subplot when Leanne and her mother reach Boston, complicating the love story even further.

When the film switches its setting to the late 1940s, Perry finds a better groove under the weight of a far more interconnected storyline. Bayou and Hattie Mae live in Hopewell, nearby Bayou’s sister Citsy (Milauna Jackson). Hattie Mae sings at a flourishing nightspot, where the extent of Bayou’s vocal range is discovered. Bayou runs into Leanne under very different circumstances, and a new threat in their lives forces him to leave Georgia for Chicago with his brother Willie Earl. Bayou then finds success as a lead singer at a nightclub of white patronage, which causes growing jealousy from his brother, who was promised a career in the spotlight. “A Jazzman’s Blues” reaches some of its peaks when Perry focuses on the musical elements and jazz scene. The film features resonant songs arranged and produced by renowned jazz musician and film composer Terence Blanchard. From juke joints in Hopewell to lavish venues in Chicago, the performances are stellar. Coupled with Brett Pawlak’s cinematography, Debbie Allen’s choreography, and outstanding vocals by Joshua Boone and Amirah Vann, the music sequences are compelling to watch. Not only for the talent involved but as forms of the characters’ self-expression. When it comes to Bayou in particular, his songs carry the added weight of love he is desperate to return to.

With multiple tabs kept on various subplots, Perry lacks thorough and deeply personified characters in his storytelling. Instead of a tightly fused story, the film feels more like a collection of narrative thoughts, as though you are watching multiple movies in one. To help create a framework, Perry occasionally deploys the use of flash-forwarding to the politician reading all the letters, though that has its own twists and turns that culminate in the final act of the story. The tone is inconsistent across genre-bending, and the screenplay is often at a surface level. Characters are written in such a way that they over-explain emotion and circumstance. However, the emotion between them is present and carries you through the story. Complex relationships between women are also featured, particularly in the 1940s setting of the film, and the conversations they share add resonant elements to the story development.

While an overall inconsistent passion project, “A Jazzman’s Blues” remains one of Tyler Perry’s better films to date. He effectively leans into the musical elements as an expression of plot development and character. Enhanced by grand technical elements, from the production design to the vocals and song compositions, Perry achieves harmonious sequences. These moments set a bar that the film as a whole can’t keep up with, between inconsistent tonal shifts and over-written characters. But with the strength of chemistry between Joshua Boone and Solea Pfeiffer, “A Jazzman’s Blues” stands out with a strong emotional core.