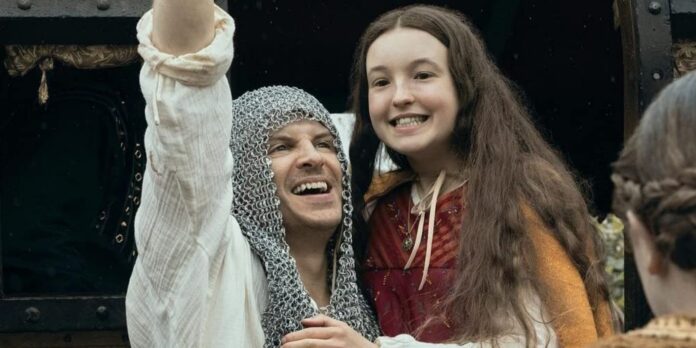 THE STORY – In medieval England, the daughter of a financially destitute Lord thwarts her father’s plans to marry her off to a wealthy suitor. When the most vile suitor arrives, her parent’s love for her is tested.

Lena Dunham is not someone you would expect could make a compelling period drama. Yet her adaptation of “Catherine Called Birdy,” based on the 1994 Newbery-Medal-winning children’s novel by Karen Cushman, is an absolute delight for young people and adults alike. You can palpably feel Dunham’s love for the source material in her direction and screenplay as she perfectly balances, making her heroine feel like a young girl without ever being condescending about her age.

Birdy (Bella Ramsey) is a fourteen-year-old girl chafing against growing up in her small medieval village in the late 13th century. She first appears in the midst of a mud fight in her village, much to the annoyance of her highborn parents and her nurse (Lesley Sharp). The film is narrated through Birdy’s journal of her days, which her monk brother has urged her to keep to help improve her reading and writing. She loves her mother, Lady Aislinn (Billie Piper), but she’s bedridden mainly with another pregnancy, allowing Birdy to run a bit wilder than usual. Birdy clashes with her brother, who is still at home, Robert (Dean Charles Chapman). But Birdy’s most contentious relationship is with her father, Lord Rollo (Andrew Scott), a ridiculous aristocrat who cannot curtail his own outrageous spending and is perplexed by his daughter but is utterly devoted to his wife. Rollo sees that marrying his daughter off is his best bet at being saved from financial ruin, despite Birdy’s attempts to remain a child. Though Birdy sees him as a cruel father, and he’s hilarious in his more bombastic moments, he also has genuinely moving scenes in which it’s clear he is doing the best he can. Our young heroine is reluctant to leave her two best friends: Perkin (Michael Woolfitt), the goat boy, and Aelis (Isis Hainsworth), a beautiful young noblewoman around her age. However, her favorite person is her dashing Uncle George, portrayed by a particularly debonair Joe Alwyn.

The cast here are all uniformly aligned with Dunham’s modern vision for this period set film. Ramsey excellently imbues Birdy with a precociousness that never steps over the line into grating, showing that there’s real emotion and vulnerability behind her mischievous ways. Dean Charles Chapman has a particularly hilarious scene in the later part of the film that significantly stands out. And it’s easy to see why Alwyn is the heartthrob of the village, but he also shows that George has returned from the Crusades as a changed man, providing one of his better performances yet.

As Birdy goes about getting rid of all of her potential suitors, especially the horrible Shaggy Beard (Paul Kaye), the film indulges in lots of cheeky sequences, from a scene of hot young monks at the monastery to the use of the song, “My Boyfriend’s Back” by The Angels. The mix of the modern soundtrack with the fun but mostly historically accurate costuming by Julian Day helps the film maintain its light mood even as it delves into more serious topics. The production design by Kave Quinn is also top-notch, bringing to life both peasant and wealthy spaces marking an all-around technical step up for Dunham as a filmmaker.

Perhaps what’s most impressive about “Catherine Called Birdy” is that it manages to bring to life a young teenager in the Middle Ages without feeling like it falls too far into the girl boss feminism approach that too many historical fiction works take. Birdy isn’t trying to dismantle the whole patriarchy; she just wants to avoid getting married to someone she hasn’t chosen before she’s ready. It’s refreshing and worth commending Dunham for. There’s a bit of a strange plotline around Birdy having a crush on her Uncle George (particularly odd coming from Dunham). Still, even the film acknowledges that it’s the intense fascination of a young girl and nothing more.

The film’s most poignant moments are when Birdy must reconsider what she knows about the people in her life – seeing her condescending older brother smitten with a girl, realizing the depths of her stern father’s love for his family, feeling the pain behind her poised mother’s smiles. She receives a hard lesson in the ways in which our childhood heroes can let us down, but also in how those that we don’t expect to come to our aid can sometimes surprise us. These more sensitive topics, alongside the childlike fun, make Birdy one of the more relatable characters of the year and “Catherine Called Birdy” one of the year’s strongest period films.