​A History Of World War I Films At The Oscars 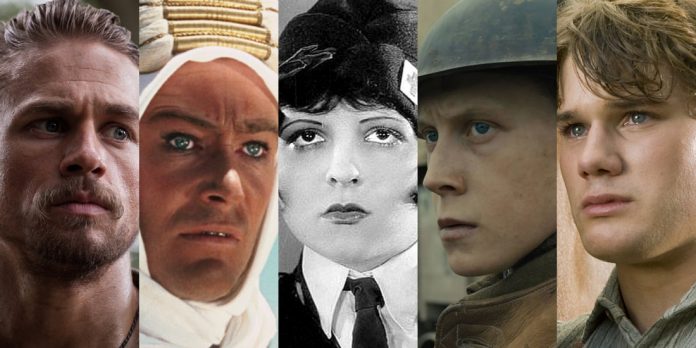 By Nicole Ackman ​​​
​
At the 1st Academy Awards in 1929, Best Picture was awarded to “Wings,” an American silent film set during the First World War. War movies have always been popular at the Academy Awards; and yet, despite their popularity in earlier years, films about World War I have seen little Oscar success in the 21st century. This is partially because there are simply fewer films made about the First World War than other wars (particularly the Second World War), especially within the United States.

World War I, or the Great War, was fought between 1914 and 1918 across multiple continents. It was a war of catastrophic devastation, utilizing new technology like machine guns and mustard gas. In four years, around sixteen million soldiers and civilians were killed, not including those that died in genocides and in the Spanish influenza outbreak. Before the war had even ended, films were being made about it by directors like Cecil B. DeMille, D. W. Griffith, and Charlie Chaplin.

It remained a particularly popular subject of movies between 1920 and 1940, and films were being made regularly even into the 1960s. “Wings” (1927), “All Quiet on the Western Front” (1930), “A Farewell to Arms” (1932), and “La Grande Illusion” (1937) were all well-received and garnered Oscar nominations for Best Picture. In 1941, “Sergeant York” was nominated for Best Picture and won its leading man, Gary Cooper, an Oscar. While “The African Queen” (1951) didn’t get a nomination for an Academy Award for Best Picture, it did get nominated for Best Director for John Huston and Best Actress for Katharine Hepburn. Plus, Humphrey Bogart won the Best Actor award for his role.

Since the 1950s, movies about the First World War have become rarer. Films set during the war remain more popular in the UK, Australia, and Europe today than in the United States (which was involved in the war but only for the last two years). Original stories, not based on novels or plays, are particularly difficult to come by. Of course, the epic “Lawrence of Arabia” won seven Oscars in 1963: Best Picture, Best Director, Best Score, Best Cinematography, Best Production Design, Best Editing, and Best Sound Mixing. In 1966, the sweeping “Doctor Zhivago” won five awards.

Films about World War I have been almost entirely missing at the Oscars in the new century. Michael J. Bassett’s “Deathwatch” (2002) received no Oscar nominations, and “A Very Long Engagement” (2004) was nominated for Best Production Design and Best Cinematography, but took home neither. The following year, the French “Joyeux Noel” was nominated for Best Foreign Language Film, losing to South Africa’s “Tsotsi.”

There have only been a handful of films explicitly about World War I in the last decade. Movies like “The Lost City of Z” (2016), “Wonder Woman” (2017), and “Tolkein” (2019) have all included sequences about the war, though they don’t wholly focus on it. Similarly, television series like “Downton Abbey” has depicted the war. Most notably, Peter Jackson’s 2018 documentary, “They Shall Not Grow Old,” transformed original footage of the war (much of it unseen by the public) into a colorized, fascinating look at history.

Most of the films about World War I in the past decade have been unsuccessful at the Oscars. Examples include: “Testament of Youth” (2014) based on a memoir of a wartime nurse and starring Alicia Vikander, Kit Harrington, and Taron Egerton; “The Promise” (2016), set in the Ottoman Empire during the war, focuses on the oft-forgotten Armenian Genocide and starring Christian Bale and Oscar Isaac; In 2017, the play “Journey’s End” was adapted with Sam Claflin in the leading role. None of these films received any Oscar nominations.

The only truly successful World War I film this decade, before “1917,” was Steven Spielberg’s “War Horse” (2011). The film is based on the novel and play of the same name and tells the story of a horse and the many lives he touches throughout the course of the war. It was nominated for six Academy Awards: Picture, Production Design, Cinematography, Score, Sound Editing, and Sound Mixing. It won none, overshadowed by “The Artist” and “Hugo.”

Sam Mendes’s “1917” has already outperformed every other World War I film of this century with its ten Oscar nominations. It became the ninth film about the war to be nominated for Best Picture, and also garnered nominations for Director, Original Screenplay, Score, Cinematography, Makeup & Hairstyling, Production Design, Sound Editing, Sound Mixing, and Visual Effects. Additionally, it was included on the American Film Institute’s Top Ten Films of the Year list, was nominated for the WGA, won the DGA, PGA and most recently, seven BAFTAs. Though it didn’t manage to win anything at SAG, it won Best Picture – Drama and Best Director at the Golden Globes.

While its path isn’t smooth, “1917” has a strong shot at the Academy Award for Best Picture. Its main competition comes from foreign language film “Parasite,” Quentin Tarantino’s “Once Upon a Time in Hollywood” and Taikia Waititi’s WWII film “Jojo Rabbit.” On its best day, it has a chance of winning nine of its ten nominations: Picture, Director, Cinematography, Production Design, Makeup & Hairstyling, Sound Mixing, Sound Editing, Special Effects, and Score. Even on its worst day, it’s likely to take home Cinematography and at least one of the Sound awards.

If “1917” wins Best Picture at the Oscars this weekend, it will be the first time that a film about World War I has won since “Lawrence of Arabia.” World War I had many effects on our modern world: the mobilization of women outside of the home, the division of the Middle East, the influenza epidemic that killed millions, the introduction of “shellshock,” which would later become understood as PTSD. It was supposed to be the “war to end all wars” and yet it introduced a more vicious type of warfare to the world.  “1917” allows us to live through one day alongside a British soldier as he fights for his life in the trenches and the French villages. How better to remember such a world-changing conflict than through a film like that?

Do you think “1917” is going to win Best Picture? Would you like to see more World War I films get made? Let us know your thoughts in the comments section below or on our Twitter account.