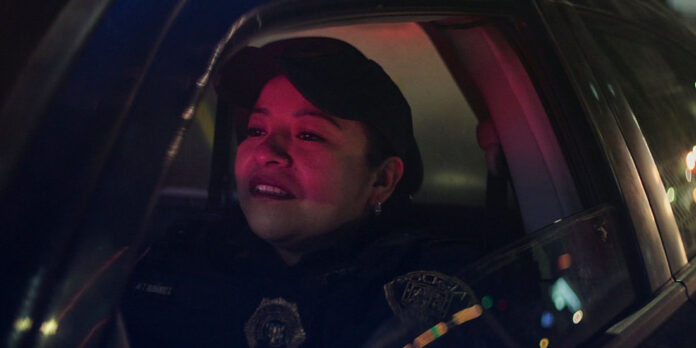 THE STORY – Two actors undergo an immersive process to find out what it takes to be a police officer in Mexico City.

​​While there are standard practices in any genre of film that one can expect to find, it’s always fascinating when one can come around that plays with those preconceived expectations. Having the opportunity to witness a subversion in what would be a predictable formula is a way to entice an audience to be further drawn into an intriguing story. It’s rather interesting that documentaries are a medium that rarely break from its traditional molds, at least in instances that linger outside obscurity. “A Cop Movie” is one that aims to defy those conventions with all the force it can muster, blending genres and techniques into a compelling examination of a particular cultural landscape.

The subject of the film takes a look at the state of the police force in Mexico City, specifically through the perspective of officers Teresa and Montoya. The two are introduced separately before being revealed to be a couple, known as “the love patrol” amongst their fellow officers. The pair paints a complicated world in which corruption and deceit plague their daily lives, showing the attempts to resist while being complicit in such a broken system. The audience is treated to not only their own voices but also reenactments, along with a host of other techniques to infuse the presentation with a liveliness that showcases the treacherous avenues they must constantly navigate.

The approach to the storytelling of the film is really taken in two halves. The first indulges more in direct reenactments, in which actors are portraying the couple and perform these events that have been described. It’s a way for director Alonso Ruizpalacios to inject a sensibility of inventive genre filmmaking, and it keeps the tone wildly engaging. The dynamic rhythm moves the pacing along in a brisk manner, despite the occasional allowance of more dry procedural elements. The jazzy score and creative set pieces create a sense of entertainment while also acknowledging the emotional states of these individuals. It’s a style that harkens back to his previous films “Güeros” and “Museo,” other stories that took an intimate look at a slice of Mexican society with deep personal resonance.

On the other side is where things return to more familiar trappings of the documentary format, though there’s enough to distinguish its own tone as well. Direct interviews with the real-life subjects shed light on their conflicting emotions, though the immediate indictment of police misconduct only goes so deep. There’s also a meta-commentary at play, as the actors hired to portray these people are shown going through basic training within the police force. The window they share is one that also comments on the corruption at play, this time with a more scathing critique from an outsider’s mindset. Still, things can feel slightly muddled towards the end in terms of the messaging. It’s what makes the momentum in the story decelerate, and the events become less captivating.

At the same time, there is an intriguing dynamic at play that keeps one entirely invested. The unique presentation that blends fiction and documentary compositions presents an evolving narrative that thwarts assumptions of how this story should unfold. While it can be frustrating at times to gain one’s footing throughout, there’s a particular excitement to watch this exploration at hand. There is a complete portrait of the joys and hardships of those wishing to serve as police officers and the demoralizing consequences that come from such an occupation. Even when its interrogation could go deeper, the film does not offer a complete exaltation of police either. This is more observational in execution, and its style is vibrant and alluring. The prospects of reality are altered in a way not to feel disingenuous but instead create an engrossing tale to follow.

There are not too many documentaries quite like “A Cop Movie” around these days. This is a film that is not afraid to experiment with a rigid formula that has been placed before it, and it manages to explore its topics and themes in a riveting manner. Ruizpalacios infuses a tone into the reenactments that are as gripping as any fictionalized story, and he makes the more traditional documentary aspects just as revealing and detailed. This is much appreciated, even though the film suffers to keep that momentum sustained until the very end, where the impact of the analysis is less felt. Still, this is a wholly original effort that is applauded, and one can only hope for more daring undertakings within a medium with vast possibilities of demonstrations.