“A BEAUTIFUL DAY IN THE NEIGHBORHOOD” 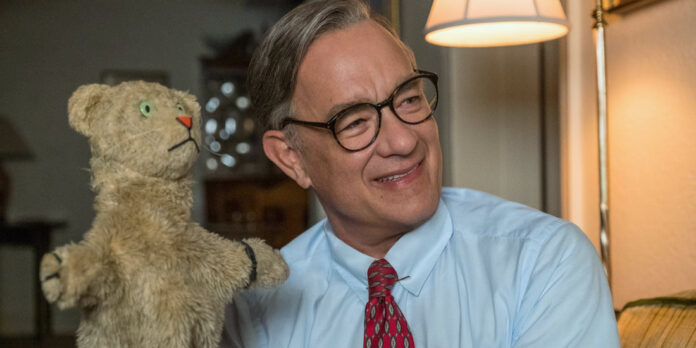 THE STORY – A journalist’s life is enriched by friendship when he takes on an assignment profiling Fred Rogers. Based on the real-life friendship between journalist Tom Junod and television star Fred Rogers.
​
THE CAST – Tom Hanks, Matthew Rhys, Susan Kelechi Watson & Chris Cooper

​​Fred Rogers is a national treasure. His open-hearted television program “Mister Rogers’ Neighborhood” had an impact on generations of children, mostly by engaging in the simple act of listening to them and treating their feelings just as seriously as those of adults. According to seemingly everyone who has met him, as partially documented in last year’s “Won’t You Be My Neighbor?,” he was in real life almost exactly as he presented on his program: A genuinely nice guy who loved everyone. This was also the subject of Tom Junod’s 1998 Esquire Magazine article “Can You Say… Hero?” which documented the author’s personal struggles as he was assigned to write a profile of Mr. Rogers, which has now been turned into a film by screenwriters Micah Fitzerman-Blue and Noah Harpster and director Marielle Heller, starring Matthew Rhys as Junod stand-in Lloyd Vogel and Tom Hanks as Rogers.

Even if you haven’t read Junod’s article, there’s nothing surprising about the story: Vogel is a new father and an investigative journalist who believes it is his job to uncover the truth and hopefully change the world. His own father has reappeared in his life after a long estrangement, and Vogel is not happy about it. When assigned to write a profile on Rogers, he is desperate to uncover some hidden truth about the man, but in the process of interviewing him, Rogers ends up helping Vogel learn and grow because that’s just the kind of man he is.

It’s a predictable story, but oh the way that story is told! “A Beautiful Day in the Neighborhood” is presented from the opening credits as an episode of Rogers’s program, using many of his original songs and a similar structure. The playfulness of this even extends to scene transitions that feature the Manhattan and Pittsburgh skylines done up in the style of the town in the show’s opening credits. It’s hard not to be charmed by the film immediately, especially if you watched “Mister Rogers’s Neighborhood” as a child. The recreation of the show is flawless, from the production design and soundtrack right on down to Hanks’s performance. Hanks doesn’t really look or sound much like Rogers, but he captures the man’s spirit effortlessly, talking to the camera as if he were speaking to each audience member individually.

Taking a cue from her subject, Heller presents much of the film with a storybook-like quality, using camera angles and colors to sprinkle just a little bit of magic over everything. Heller’s direction is inspired, and she is able to tweak the audience’s emotions just enough without ever going overboard. The screenplay helps, perfectly balancing the childlike whimsy of Rogers’s program and the complicated realities of adult life. Matthew Rhys proves a perfect anchor, holding firm at the story’s center and ably navigating Vogel’s arc from skeptic to believer. His reactions to Rogers’s genuine goodness cause laughter at first, then sympathy, and finally contentment, mirroring our adult reactions to a television program from our childhoods.

The rest of the cast provides great support. Susan Kelechi Watson is tough but warm as Vogel’s wife, Maryann Plunkett is a joy as Rogers’s wife Joanne, Wendy Makkena is touching as Vogel’s father’s girlfriend, and Chris Cooper gives a heartbreaking performance as Vogel’s father Jerry. Watching him come to terms with his past mistakes as he suffers a fatal health setback is enough to make anyone think of reconciling with their own fathers, which is exactly what Mister Rogers and Tom Junod would want.

That kind of warm feeling of love, of accepting each other flaws and all, is at the heart of “A Beautiful Day in the Neighborhood” and it comes through loud and clear. In today’s society, we dearly need this reminder that we are all neighbors and that we should treat each other with love, kindness, and respect, no matter our differences. In fact, our differences are what make us beautiful. That the film ends with a subtle reminder that none of us are perfect may seem like a strange note to end on, but it feels just right. Fred Rogers was a beacon of light, but he was no saint. He committed to putting love out into the world, worked to make himself a better person. It’s an example we should all strive to follow, and what a joy it is that we have this beautiful, playful, magical film to remind us to do so.