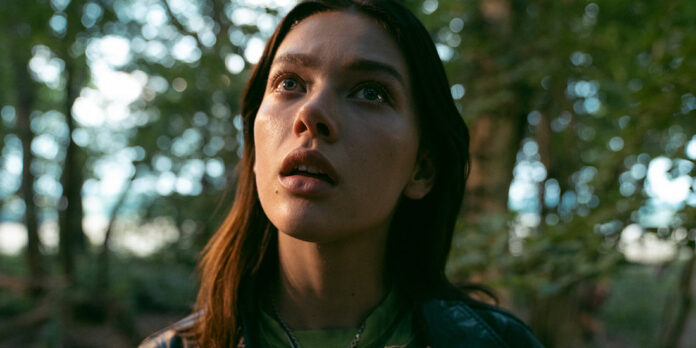 THE STORY – A widowed mother is radically tested when her teenage daughter insists a supernatural experience has left her body in service to a higher power.
​
THE CAST – Sienna Guillory, Jessica Alexander & Ruby Stokes​

​Pardon the indulgence, but watching Ruth Paxton’s “A Banquet” is a bit like going to dinner at a gourmet restaurant, sitting down in the handsomely-appointed dining room, having a sommelier pour a paired wine with your gorgeous-looking dinner, and taking a bite… only to find that the food is underseasoned.

The film is about Holly (Sienna Guillory) and her daughters Betsey (Jessica Alexander) and Isabelle (Ruby Stokes), all of whom are struggling in different ways to move on after the horrible death of the girls’ father. Outside of a friend’s house party one evening, Betsey experiences something that causes her to go catatonic and essentially stop eating occasionally. After a while, she insists that a god-like entity has chosen her in order to prepare her family (and perhaps the world) for a new future. Holly is distraught and uncertain of what to do, especially since Betsey doesn’t even seem to lose weight.

This is a pretty thin premise to hang a full feature on, especially when the focus stays so tight on the family in question (Lindsay Duncan adds quite a bit of class as Holly’s mother). Still, it can also withstand a pretty hefty portion of subtextual readings. Unfortunately, Paxton and screenwriter Justin Bull haven’t decided which of several themes should be the main course, instead of serving them all up as a table full of small plates. Unlike with food, though, these little bites aren’t enough to satisfy when taken all together. Instead, each seems undernourished. A slice of coming-of-age issues here, a hunk of examination of the mother-daughter bond there, a dash of class commentary for flavor, and so on. and so forth Tossing so many things together leads to none of them getting the full attention they deserve, which is frustrating, especially when the filmmaking craft is so strong.

“A Banquet” is drenched with atmosphere, most notably due to some stellar interplay between the film’s soundscape and its score by CJ Mirra. Often the score will take the sound in a scene as a jumping-off point, extending the sound of, say, a knife scraping food off a plate until it distorts into something else entirely. Combined with the potent lighting of David Liddell’s cinematography, it can be quite an intoxicating experience at times. The performances also contribute to the overall aesthetic, although Stokes suffers from an underwritten role, and there are some lines that neither Guillory nor Alexander can sell convincingly. Although a late-film revelation about Holly’s own childhood inspires nothing but eye-rolls, it’s very easy to feel for all these women, for what they’re going through and what they’re repressing. But when everything finally comes to a head and the film comes to its climax, all that fantastic atmosphere disappears.

The film’s strongest elements virtually disappear for the last act, making it hard even to remember how strong the film was in the build-up to that moment. This is Paxton’s debut feature, and one can’t help but hope that her next one will give her more to work with. She’s got style to spare, but in the case of “A Banquet,” all that style doesn’t really add up to much.